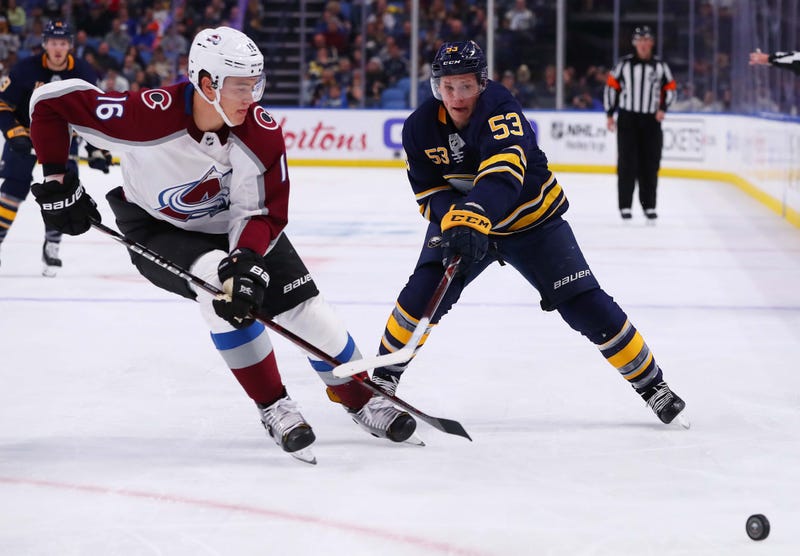 Following a much-needed win over the Columbus Blue Jackets on Saturday afternoon, the Buffalo Sabres will continue on with their homestand on Tuesday against the Colorado Avalanche at KeyBank Center.

It was Jack Eichel's heroics in overtime on Saturday that helped the Sabres snap a three-game losing streak, and possibly reinvigorate some life into Buffalo's playoff hopes, despite the fact that the team still sits 10 points behind the Florida Panthers for the third spot in the Atlantic Division and 11 points behind the New York Islanders for the final Wild Card spot in the Eastern Conference.

Tuesday night's matchup will be Buffalo's toughest test in this five-game homestand, and will likely be the toughest test during this stretch of six home games in the next seven games. The Avalanche enter the game as the highest-scoring team in the Western Conference with 182 goals-for this season, and combined with their 149 goals-against has a plus-33 goal differential, which ranks first in the West and fifth in the National Hockey League.

"They have a lot of speed, they are extremely aggressive in their defense, but offensively they're attacking with four-plus [players] all the time," Krueger said of Tuesday's opponent. "[They play a] very, very dynamic game. They like to play on their toes, we like to play on our toes. It's going to be a really good game tonight."

The Sabres have lost three straight matchups with the Avalanche, being outscored 14-5 along the way.

Buffalo's last win against the Avalanche came back on Dec. 5, 2017 when the team went to Colorado and beat the Avalanche 4-2. That night saw four Sabres come up with two-point nights, including a goal and an assist from both Jack Eichel and Jake McCabe.

The last win for the Sabres in Buffalo came back on Feb. 16, 2017 when Sam Reinhart and Evander Kane scored, while Robin Lehner stopped all 23 shots faced in a 2-0 shutout win at KeyBank Center.

Overall, the Sabres' history against the Avalanche has not been good since the franchise moved to Denver, going 12-15-2-3 in 32 games.

Eichel continues to ignite the Buffalo offense with his career-year for the Sabres. The 23-year-old picked up his 31st goal of the season, which currently has him ranked fourth in the league. His 65 points is tied for eighth in the league in scoring, even with Chicago Blackhawks forward and Buffalo native Patrick Kane.

The Sabres captain is currently riding a three-game goal streak, starting from the first game of the five-game homestand against the Ottawa Senators. With a goal on Tuesday, Eichel would have his second four-game goal streak of his career, with the first one coming earlier this season from Dec. 10 to 17.

He is currently on pace for 49 goals and 103 points this season, while his 70 even strength points this season are the most by a Sabres since Pat LaFontaine (83) and Alexander Mogilny (73) set back in the 1992-93 season.

One player who is trying to break out of his current slump is Jeff Skinner, who has not scored a goal in 14 consecutive games. In that time frame, Skinner has only picked up two assists, but he is also still coming off an upper-body injury suffered just after the Christmas break.

Overall this season, Skinner is still sitting with 11 goals and 19 points through 42 games.

Despite his scoring woes, Skinner is trying to stick to his game and generate more scoring chances that will, hopefully, lead to a breakthrough.

"There's little things you work on in practice. Obviously in-game there's situations I think from game-to-game where you look at things to try and adjust and create more and work with your linemates on being on the same page," Skinner said following the team's morning meetings. "I think all of those things come together when you're having success, things [start to] really click. So you just have to work at getting those things back in order."

"I think he definitely had a setback with the injury," Krueger said of his winger. "Just in the games leading up to the injury, he was really finding his groove, lots of scoring chances, lots of shots, and the goals were just going to come. Then he had that setback, and I think right now just getting back to where we were there, it's normal coming off a long injury after a couple of games you might have a little bit of a dip, and we're also working hard together with Jeff to just get him back into that space. The pressure of scoring is so big on him, and he needs to park that and just create chances and get involved in our game at 5-on-5 and the chances will follow. He wants to add, and he feels that pressure because we aren't scoring as a team right now. We need to just get him back and focused on all the other things and have that be a byproduct of his game."

At practice on Monday, the 27-year-old was skating as part of a rotation of players on the bottom two lines with Johan Larsson being unavailable at practice with a maintenance day. Some of his best success this season has come while playing on a line with Larsson at center, with Conor Sheary playing the right wing.

Sheary was consistently working on a line with Marcus Johansson and Michael Frolik on Monday.

In Skinner's career against the Avalanche, he has played in 12 games while picking up four goals and registering three assists.

Reinhart continues to play some very good hockey for the Sabres on a line with Eichel, picking up 13 points (6+7) in his last 13 games. The 24-year-old has put up 18 goals and 25 assists for 43 points in 52 games this season, and is currently on pace for career-high totals in goals (28) and points (68).

The Sabres will face an Avalanche team that is chock full of talent, especially up front with dangerous playmakers like Nathan MacKinnon, Mikko Rantanen, Gabriel Landeskog, Andre Burakovsky and Nazem Kadri.

MacKinnon is one goal shy of Eichel's 31 this season, but he currently ranks fourth in the NHL for scoring with 72 points in 50 games played. The 24-year-old is on pace this season to set career-high totals in goals (49), assists (69) and points (118) in his seventh season in Colorado.

Rantanen has seen himself missing some time this season due to injury, but has had still produced at over a point per-game pace with 16 goals and 19 assists for 35 points in 34 games. However, he has become a dangerous scorer and playmaker himself during his four full seasons in the NHL.

Injuries have been a bit of a story for the Avalanche this season, however, they still currently sit third in the Central Division with a 28-16-6 record and 62 points. On the road this season, Colorado has been very potent with a 14-9-2 record.

Shutting down the Avalanche and their playmakers will be a top priority for the Sabres if they want to come away with another win before facing the NHL's worst team in the Detroit Red Wings on Thursday night at KeyBank Center.

"Obviously they have top-end guys. We just want to make sure that everyone's got their legs in the game, that we start skating right away, and just play our own game. I think that's the key for tonight," Sabres defenseman Henri Jokiharju said on Tuesday morning.

The young Sabres defenseman has had a very solid first season in Buffalo after being acquired from the Chicago Blackhawks in the offseason for forward Alexander Nylander. The 20-year-old has not missed a game all season, and has put up four goals and nine assists for 13 points.

Before the season started, many had Jokiharju pegged to find himself back in the American Hockey League and with the Rochester Americans at some point during the early part of the season once some healthy bodies returned to the lineup. However, Jokiharju had exceeded many people's expectations and has firmly set himself in the every day lineup for the Sabres. His play at both ends of the rink is very controlled, and his vision allows him to be a very relied upon player in all types of situations for this group.

When asked about his game and how he fits in the make up of this team moving forward, Krueger said that his young blue liner has showed the confidence in his game going all the way back to the 2019 IIHF World Championship in Slovakia back in May.

"Winning the World Championship as a European player, especially with a country like Finland, is an unbelievable experience as being one of the top-six defensemen. The World Championships kind of go under [the radar] because of the Stanley Cup [Playoffs] being on here in North America, but in Europe they mean a lot, especially to those countries that are chasing the big boys like Sweden, Russia, the Czech. For the Finns, that was a big win. I thought from there, when we communicated and everything that happened in his mind through the summer, his confidence was really high coming in here, and then he just worked so hard at everything he does. He's a very coachable player. He embraced the way we want to play here when we speak about gapping and we speak about solving pressure in our end. Both of those components he's outstanding at, and that's why he's an excellent fit to where we're going with this hockey team here in Buffalo and the Sabres hockey of the future. He's going to be an important piece."

Carter Hutton will get the start in goal for the Sabres after having his 12-game losing streak snapped on Saturday against the Blue Jackets. The 32-year-old has looked very good over the course of his last three games, going 1-1-0 with a 1.42 goals-against average and a .946 save percentage. He did not start last Tuesday night coming out of the break against the Senators, but he was forced to come into the game in the third period after Linus Ullmark suffered a lower-body injury.

If the Sabres are to have any chance of sticking close with the Avalanche throughout the night, especially with their high-octane offense, they will need to get out on the attack fast and try to get the game's first goal.

Only a handful of player decided to take the ice on Tuesday for a morning skate, which included Rasmus Dahlin and Brandon Montour, who are dealing with, what Krueger determined as, "minimal management of bodies." However, Krueger said on Tuesday that injuries are not the only thing that could have a determining factor on the lineup against Colorado.

"I would love to be able to tell you the roster, but I have to be honest that we're still assessing," Krueger said on Tuesday. "We're also dealing with not only with some light injuries, but we're also dealing with some sickness in the room right now. We are evaluating as I stand here, so the way the roster is going to finally play out, we will let you know as soon as we have it."

As of Tuesday afternoon, the Sabres announced that Dahlin and Larsson will not play against the Avalanche due to an upper-body injury and lower-body injury respectively. In addition, Cutis Lazar will miss Tuesday night's action with an illness.

With a number of bodies out of the lineup, especially at forward, the Sabres had to call up forward Rasmus Asplund from the Rochester Americans. The 22-year-old has appeared in 28 games for the Sabres this season, registering a goal and two assists for three points.

The Amerks are in Cleveland, Ohio on Wednesday to take on the Cleveland Monsters.

Be sure to tune in at 6 p.m. for the Paul William Beltz Pregame Show with Mike Schopp and the Bulldog from (716) Food and Sport, where you will hear more from Krueger, Skinner, and Jokiharju. In addition, Sabres general manager Jason Botterill is expected to speak with Schopp and the Bulldog on Tuesday at 5:30 p.m.