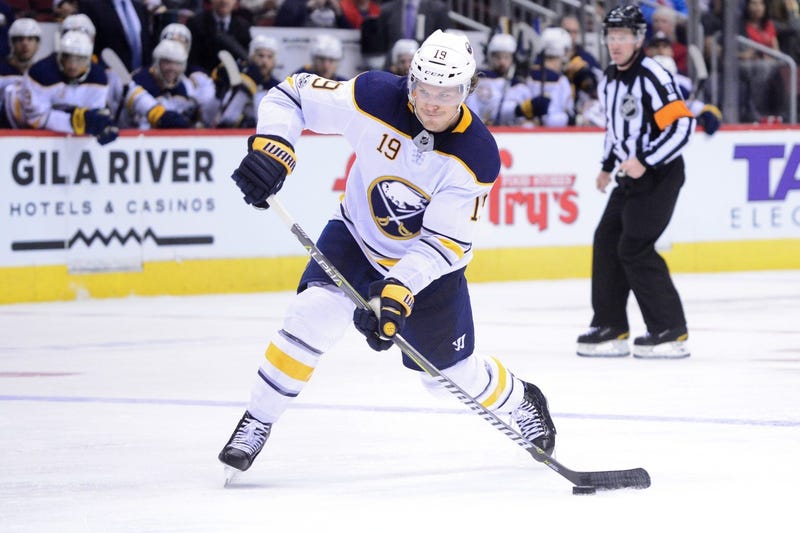 Matt Hunwick took the line shifts on Monday with Brandon Montour, while Marco Scandella was with Rasmus Ristolainen. Casey Nelson was the extra, and I asked Phil Housley why Nelson hasn’t played since coming back from injury. Housley said, “I’m not going to rule Casey Nelson out for tonight, that’ll be a game-time decision, but it’s more of the lefty/righty thing for me. We’ve got three righties and a lot of them haven’t played the left side. Brandon had to play a little bit on the left side the last game and I thought he did a good job.”

Kyle Okposo knows where the team is in the standings and he knows what the odds are at making the playoffs. Despite all that, he says that the Sabres still have a winning run left in them, “There’s still time, we have to find that consistency and try to get hot here. We know the position we’re in and we have to find the belief in ourselves and the consistency to win some games, but we’ve got to string some wins together and we’ve got to figure it out quick.”

Linus Ullmark will start his third straight game and fourth out of five. He’s given up seven goals in his last two games and has an overall goals-against on 3.06. Ullmark is 2-4-0 in his last six games. He’s 6-8-1 in his last 15.

The Sabres got waxed in Edmonton, 7-2. Buffalo has won three of its last four at home, and four of its last six at the arena.

Until Toronto, the Sabres had scored a power play goal in four straight games, going 5-for-14. That’s a 36-percent success rate.

Jack Eichel had his seven-game point streak snapped in Toronto.

Casey Mittelstadt is back struggling at both ends of the ice. He has just one point in seven games. With that in mind, Housley has him with two veterans, Scott Wilson and Jason Pominville.

In the first four games of the Oilers' road trip, they’ve gone 2-1-1. Edmonton has eight goals in two games

In the game against the Sabres, Milan Lucic scored twice. The former Bruin has only scored once since then and has five goals all season.

Leon Draisaitl has 40 goals and 81 points this season. The big winger has 16 goals in his last 17 games.

Connor McDavid has 33 goals and 57 assists for 90 points. It’s hard to talk about streaks with him because he has points in most games the Oilers play. McDavid had three assists in the last game in Columbus. He’s third in league scoring.

Vladimir Sobotka had his first practice back from injury, but won’t play on Monday.

Join Schopp and the Bulldog at 6:00 for the pre-game live from (716) Food and Sport when they’ll be joined by Phil Housley, Kyle Okposo and Matt Hunwick.