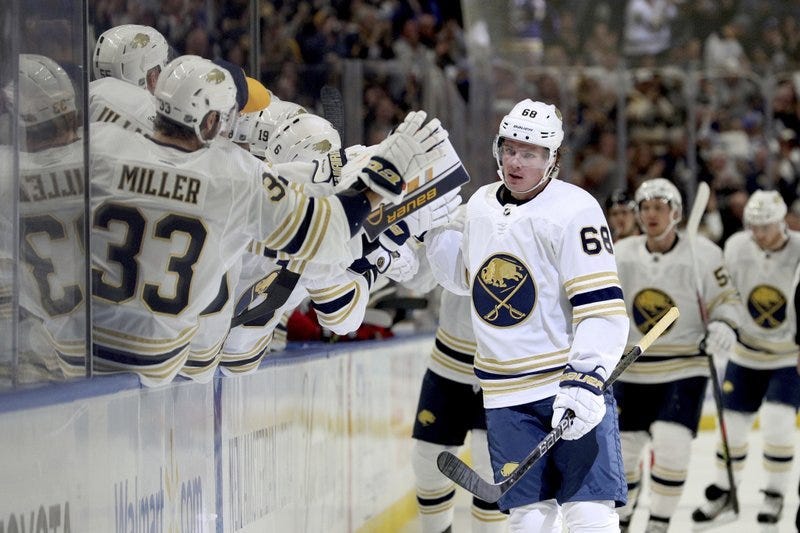 The fans started blowing the roof off the place just 2:56 in when Victor Olofsson found the back of the net. By the end of the night, they were chanting, "We want eight!"

Just like Thursday, the speed and tenacity never stopped. Watching the power play, I’d be hard pressed to find one battle that they lost. Last year, they couldn’t even get the puck in the zone.

The Sabres did all of this in front on many of their former captains, including Gil Perreault. The first player ever drafted by the Buffalo Sabres was back for the captains’ celebration. The team is honoring its 50th anniversary this year, and Perreault is a huge part of the history. He said, “It’s great, 50 years in Buffalo and the first few years the fans were great, they’ve always been great here.”

Perreault played his hockey for 17 years in the Aud. He loved games in that building, “Every game we played at the Aud was amazing, the fans were very involved.”

These days very few players play their whole career in one place. Perreault said he’s thankful he could, “I was lucky, but it means a lot, 17 years in Buffalo was great. I was the first pick and I was hoping to spend all of my career in Buffalo and it was very important to me to finish here.”

Perreault told me at the airport before the team flew to their game that night that he would not be the next captain of the Sabres. When the team took the ice, he was wearing the “C”. Perreault said it took a lot of convincing from Scotty Bowman, “Yes he did talk a long time to me about it, we had a long meeting and you know, I always had a little problem with my language, but everybody on the team accepted that.”

If you’re a Sabre, you’re probably going to be recognized when you’re out and about. Perreault said even in the early years, that was true, “The early years were crazy. The fans were a great part of the team, everywhere you go everybody was recognizing you in the restaurants and even today, I was in a restaurant today and people were coming up after 33 years.”

Many hockey experts think it’s unbelievable that the Sabres never won the Stanley Cup back then. They had the French Connection, Danny Gare and many other great players. Perreault thought for sure they’d win one.  “In ’75 we went to the final and I really thought after that for the next five years, I thought we had a pretty good chance to win the Cup.”

The Sabres wore their white golden anniversary sweaters and the fans loved every minute of it. It’s been a while since this building was that alive.