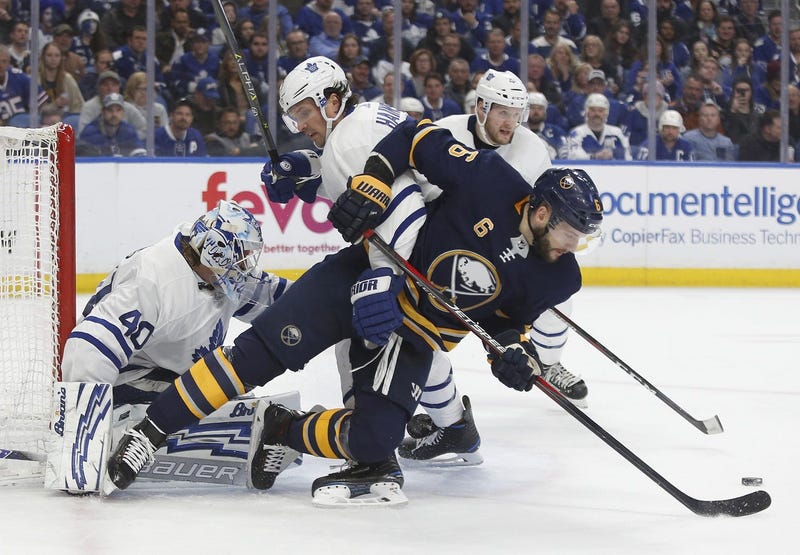 October 1, 2019 10/01/2019 8:47 pm
Buffalo, NY (WGR 550) - Marco Scandella is fighting off a challenge from John Gilmour to be in the opening night lineup on Thursday. In practice on Tuesday it was Gilmour that was working into the defensive pairs.

Scandella had a rough season last year. He would put a group of games together that were solid and then he’d put another group together where it appeared that he had lost his confidence. In the off-season he had surgery and he feels he’s ready to go, “I feel like I’ve been working one day at a time in the off season. After last season I had ankle surgery and I feel like I’m at 100% right now, so that’s what I was striving for, coming into camp in really good shape and learning the new system.

Scandella blocked a shot in late March which led to the ankle surgery.

The fans always have a whipping boy on defense. It doesn’t matter if they play well or not, many fans just blame them for anything that goes wrong. Richard Smehlik was one of the guys who had to put up with that.

What Smehlik didn’t have to put up with is the vile stuff written on social media. Scandella has been thrust into that role now as he takes a beating from fans. He said he just has to block out the noise, “I absolutely do, I feel like everyone at some point in their career has to deal with that, but I just feel like I put a really good summer in and I’m just focusing on me, I’m not focusing on anything else but the team and what I can do to be better for this team.”

Scandella has seen improvement with this team from last year. He said, “I just feel like everyone is working, I feel like in our system that if everyone works, we’re going to have success and if one guy doesn’t work, we’re going to look disconnected, so I believe in this group and I feel like with our new system it just showed in the preseason where we had more puck possession than we did last year and in previous years.”

Gilmour, Colin Miller and Henri Jokiharju are all new on the defense. Scandella has played with Miller a lot in the preseason, “Just really good puck moving defensemen and good guys too, so just having that collective group we’re jelled in this room and it feels really good right now.”

Ralph Kruger confirmed that the 22 players in practice on Tuesday will be players going to Pittsburgh for opening night.

As far as injuries go Zach Bogosian did not have a good summer Kruger said, “He just continues to go through our process off-ice. We don’t have a fixed timeline on it, he had a few setbacks in the summer so we’re being extremely careful, but he’s still a ways away from being part of any practice with us.”

Brandon Montour is better news, but he won’t be back right away. Krueger said, “He’s skating very hard, but we would say still a few weeks away from actually joining any type of contact.”

The Sabres are going to be up and around the salary cap all season so as Krueger has said, you might see daily moves. To get under the cap and at 23 players by 5:00 on Tuesday the Sabres did the following: they called up Curtis Lazar, Lawrence Pilut and J.S. Dea and sent down Victor Olofsson and Henri Jokiharju. Going on injured reserve are Zack Bogosian, Brandon Montour, Matt Hunwick and Ukko-Pekka Luukkonen.

Remember, Thursday is another day. That's when they open the season in Pittsburgh.