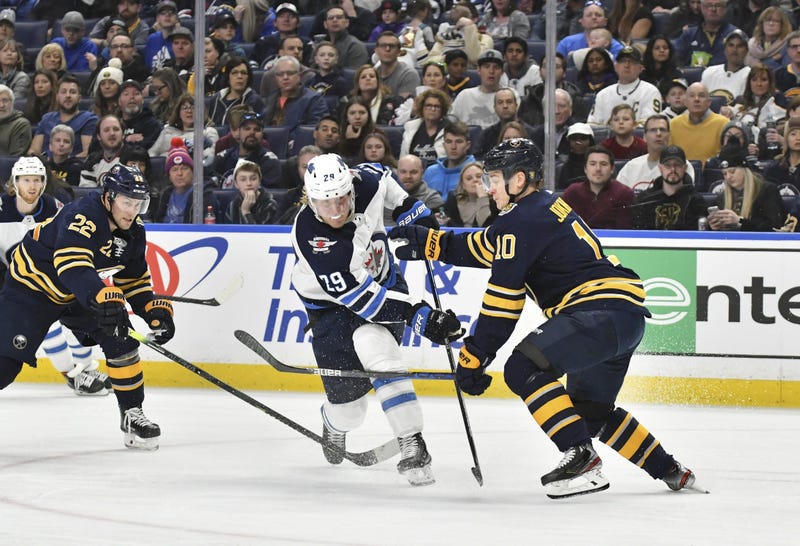 The Buffalo Sabres close out their four-game Western Conference road trip on Tuesday night at Bell MTS Place to face to the Winnipeg Jets.

The two teams met on Feb. 23 at KeyBank Center, with the Sabres picking up a 2-1 win in their final game ahead of the NHL Trade Deadline. Carter Hutton watched as Jonas Johansson made 25 saves for his first NHL victory.

Tuesday will be Hutton’s chance to defeat the Jets as he will start in goal for the blue and gold. The veteran netminder has played two of the first three games of this trip.

Buffalo’s victory over the Jets marks the last victory for the blue and gold, with Kyle Okposo scoring both of the goals. Connor Hellebuyck made the start nine days ago in Buffalo and will once again be between the pipes for Winnipeg. The goaltender stopped 23 shots on goal in the loss to the Sabres.

Sabres head coach Ralph Krueger believes that the last meeting between the two teams, “was a really good hockey game all the way through, and as we couldn’t tip the games the right way against Vegas and Colorado, we did against Winnipeg. Those were really similar games all three of them” Krueger continued, “they are fighting real hard right now to maintain their position in the [Western Conference] race, and they’re a really, really connected team as far as they play in both directions.”

As expected, defenseman Lawrence Pilut will be in the lineup for Buffalo on Tuesday, according to the Sabres bench boss. He will patrol the blue line for the first time since being recalled from Rochester on Feb. 27. Pilut will replace Colin Miller in the lineup and was paired with Rasmus Ristolainen during Monday afternoon’s practice in Winnipeg.

Victor Olofsson will play after missing the majority of Saturday’s loss in Arizona, meaning Michael Frolik will once again be a healthy scratch for Buffalo.

Patrik Laine missed the Jets loss on Saturday to the Edmonton Oilers while he was dealing with a foot injury after blocking a shot in the previous game. The forward was on the ice for Tuesday morning's skate and will be in the lineup for the Jets. Laine is closing in on his fourth-straight 30 goal season, currently with 26 in 64 games for Winnipeg.

Wayne Simmonds has already played twice against the Jets this season as a member of the New Jersey Devils. The forward knows what Laine and the rest of the Jets bring to the matchup, believing that, “they can turn the puck...around and go really quickly. Their top-end guys are truly top-end guys, so you gotta make sure that you’re keeping pucks out of your zone, or in their zone at the blues. You don’t want to give them too much room in the neutral zone, and I think if you play that grinding style, keeping them down low, no team wants to play defense.” Simmonds recorded one assist in the two games played against Winnipeg earlier this season.

Tune in for the Paul William Beltz Pregame Show sarting at 7 o’clock with Brian Koziol. You will hear from Krueger, Simmonds, and Olofsson, in addition to Paul Hamilton’s keys to the game. The puck drops just after 8 p.m. on the flagship home of the Sabres Radio Network – WGR Sports Radio 550.