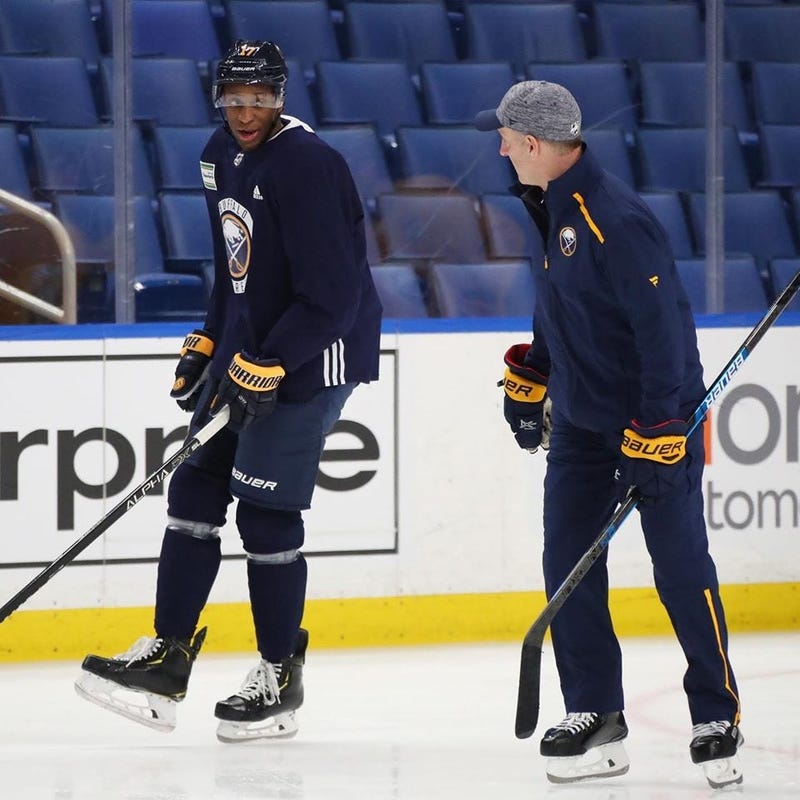 Simmonds will be an unrestricted free agent on July 1, so he wasn’t surprised that he was traded, “I thought something was going to happen. I had a couple of talks with Fitzy [Tom Fitzgerald] the [interim general manager], so it was just a matter of time.”

Jason Botterill got Simmonds to provide grit and leadership. Ralph Krueger said he already has seen Simmonds be a leader in the room before his first practice. The winger knows his role and what’s expected of him, “I think I bring some solid leadership to this group. I play a physical game, and if you look at the lineup there are a lot of skilled players, and I think I can complement these guys.”

Simmonds had to waive his no-trade clause and he said, “It’s the young talent on this team. I think they’re going in the right direction, and I thought I could be a piece that could ultimately help this team get into the playoffs.”

Simmonds knows what games are like at this time of year, and he feels it’s his job to help the younger Sabres through it, “It’s a lot tighter hockey, and I think I’m a pretty vocal guy and I try to lead by example.”

The 31-year-old knows he can’t score and play like he used to. He said that makes the next month very important for him, “I’m a UFA [unrestricted free agent] at the end of the year. Whether I stay here or I go, I’ve got to prove myself, so playing these meaningful games and trying to push this team into the playoffs.”

Krueger thinks Simmonds brings a good element to this group. He said, “The conversations with Wayne yesterday and today have been motivational for me too. He’s got an excellent spirit and brings a lot of good experience, loves to do things that we need more of with net pressure.”

Krueger isn’t interested in what has been for Simmonds, he’s only interested in going forward, “Let’s work with him now and get him playing the game he wants to play and our goal is to get the potential out of the individuals. so beginning today, we work hard with Wayne to find out what that is.”

Dominik Kahun is going to meet the team in Denver. Kahun has a lower-body injury and said if he’s not ready against the Avalanche, he will be ready in Vegas. Colin Miller missed practice due to personal reasons.