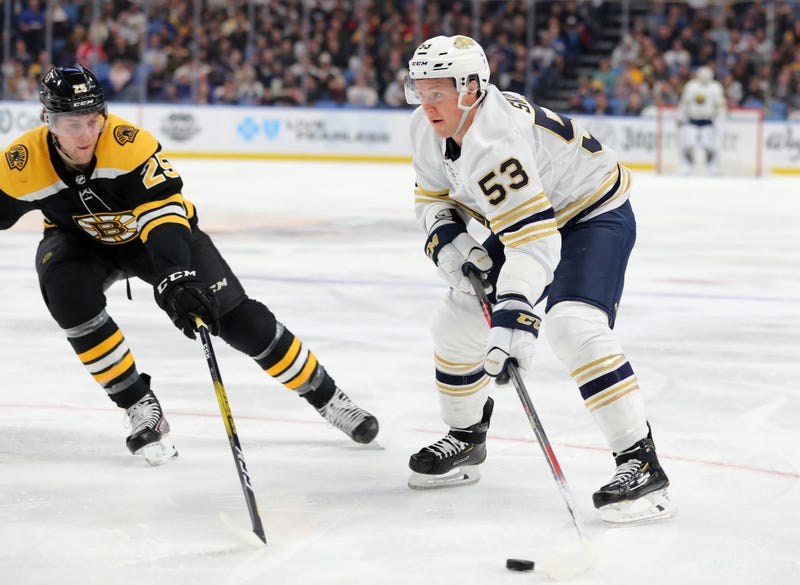 Skinner has slumped in December, but so have many of his teammates. Ralph Krueger did a complete change to the lines during Saturday’s practice and he said they must move forward, “It’s definitely a setback as he was really feeling good of late too and it looked like he was on the verge of breaking out.

“We all know he’s streaky and we could’ve used that streakiness now, but he’s gone and we need to fill the hole. That’s what we focusing on now is how to potentially mix the line up to get at least two lines scoring again.”

The Sabres have scored just five goals in their last four games. The first thing he did is move Sam Reinhart off the line with Jack Eichel and Victor Olofsson and replace him with Kyle Okposo. The next move was to move Marcus Johansson back to his natural position on the wing and put Johan Larsson between him and Reinhart. Krueger said, “A lot of people have worked hard in the depth of our lineup. You know if I look at Larsson, if I look at Okposo, if I look at Girgensons I look at maybe spreading them out and taking their habits into other lines. It might just deepen the way that we present ourselves.”

Larsson has missed three games with an upper-body injury. Krueger said they’d check him out on Sunday, but, “It looked positive today.”

Krueger had to change the lines due to injury, but he said it likely was coming anyway, “We were definitely on the verge. It just felt coming out of the break it wasn’t the right time, but we never got to that.”

Krueger would not commit to Saturday’s lines for Sunday’s game in Boston. The other lines were:

Krueger didn’t shut the door on calling up a forward from Rochester. There are only three options in Casey Mittelstadt, J.S. Dea and Scott Wilson.

We did get a chance to speak to the players about what the loss of Skinner is going to mean. Okposo said, “Injuries happen. Anytime you lose a guy it’s tough, especially Skinny, he’s a game breaker, but it gives other guys an opportunity to step up.”

Johansson has played with Skinner most of the season. He said, “He’s a big part of this team and we’re going to miss him, but it’s a good opportunity for other guys to step up and we’ve got a lot of guys looking to do that.”