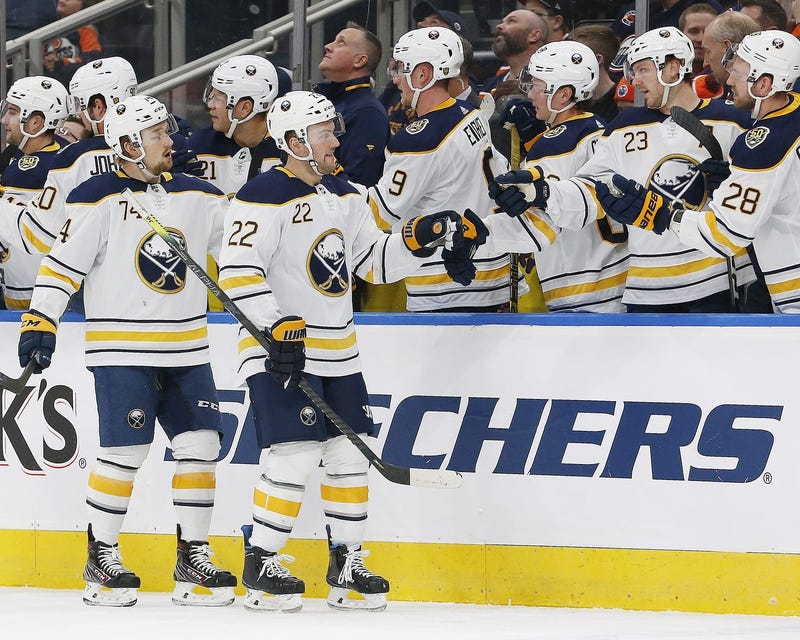 The Buffalo Sabres were able to salvage their three-game Western Canada road trip on Sunday night with a 3-2 overtime win over the Edmonton Oilers at Rogers Pace in Edmonton, Alberta. With the win, the Sabres ended their trip by going 1-1-1 and earning three of a possible six points in the standings.

After getting out to a 2-0 lead in the first period, the Oilers came back to tie the game in the second period and eventually force overtime.

It took Buffalo just 1:13 into overtime for defenseman Colin Miller to score his first goal as a member of the Sabres to give the team a much-needed two points. Miller was able to finish off a nice passing play in front of the Oilers net with a snap shot that just got past goalie Mike Smith and into the back of the net.

It was Sabres forward Kyle Okposo who got things started in the first period with his third goal of the year and second goal in as many games. Sabres defenseman Marco Scandella fired a slap shot from the point off a turnover in the Edmonton zone that found its way to Okposo's stick and in past Smith for the first goal of the game.

After the Sabres and Oilers traded a couple of penalties back and forth, the Sabres found the back of the net again shortly after getting to even strength. This time, it was Johan Larsson giving the Sabres a two-goal lead after a shot from Jimmy Vesey left him wide open in front of the net with the puck. Larsson slipped it between Smith's legs to give him his third goal of the season.

The Sabres ended up outshooting the Oilers through the opening 20 minutes, 11-10, and took a 2-0 lead heading into the locker room.

The Oilers took over the second period and were able to battle their way back to tie the game.

Edmonton closed the gap to 2-1 at the 8:25 mark of the period when forward Riley Sheahan was sprung for a breakaway in on Sabres goalie Linus Ullmark after a turnover in the Oilers end. Sheahan turned to the backhand and slid the puck through the five-hole of Ullmark for his first goal of the season.

Later in the period, Sabres defenseman Zach Bogosian took his second penalty of the period for a hook on on Oilers forward Jujhar Khaira. In the dying seconds of the power play chance, the Oilers were able to convert as forward Joakim Nygard was able to get a piece of a Darnell Nurse shot from the point to tie the game at 2-2.

Buffalo ended up getting outshot in the period 12-4, and were lucky to be tied at 2-2 heading into the third period.

The final 20 minutes saw its chances for both teams, but Ullmark came up big, making a huge save on Connor McDavid late in the period to keep the Sabres in it.

Both teams had six shots on goal in the third, while also earning a point in the standings by forcing overtime.

At the 1:13 mark of the overtime period, the Sabres got the game-winning goal from Miller after a nice passing play with forwards Marcus Johansson and Jack Eichel. The goal was Miller's first career overtime goal.

With the secondary assist on the overtime goal, Eichel was able to extend his career-long point streak to 13 games. In that stretch, the Sabres captain has scored 10 goals and registered 13 assists for 23 points.

The Sabres return home for a matchup with the top team in the Central Division, the St. Louis Blues on Tuesday night at KeyBank Center. Faceoff is set for 7:30 p.m. with the Paul William Beltz Pregame Show starting at 6:30 p.m. with Schopp and the Bulldog at (716) Food and Sport. The game will be televised on NBCSN, so the only place to hear local coverage of the game is on WGR.