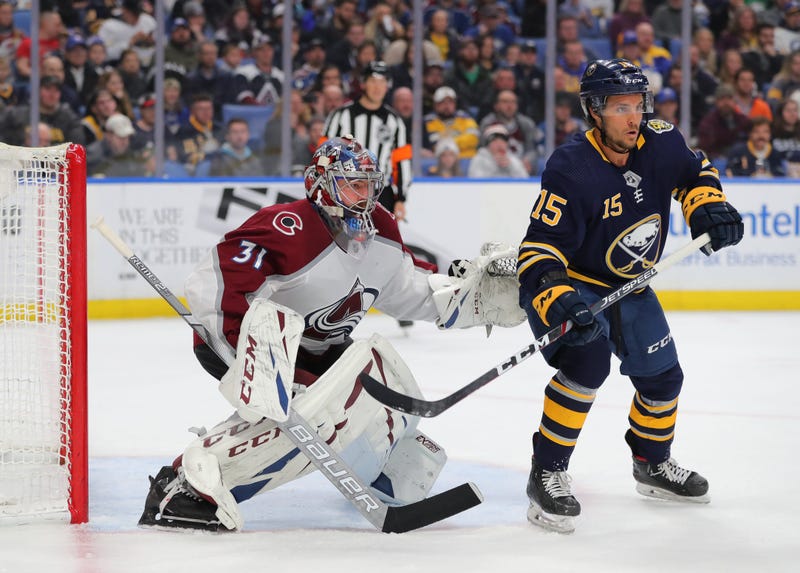 The Colorado Avalanche dominated from start to finish on Tuesday night, who scored early and often at KeyBank Center in a 6-1 win over the Buffalo Sabres.

The Avalanche opened the scoring with 6:48 left in the opening period on a fluky play. Colorado defenseman Ryan Graves shot a puck in on Hutton and in wake of the attempt, nearly every single skater on the ice got tangled up near the Buffalo crease. The puck ended up slipping loose toward the right-wing boards, where defenseman Samuel Girard picked it up and shot it into an unguarded net to give the Avalanche a 1-0 advantage.

The Colorado lead quickly became 2-0 just 45-seconds later as forward Andre Burakovsky got loose and ripped a wrist shot past Hutton. It was his 17th goal of the season, with help from Nazem Kadri and former Sabres defenseman Nikita Zadorov.

It looked as if that 2-0 deficit would carry into the first intermission, but with just 0.9 seconds left in the period, Jake McCabe got a wrist shot off from the high slot that was deflected by Sam Reinhart past Avalanche goaltender Philipp Grubauer. It was Reinhart's 19th goal of the season as he continues his strong pace in the 2019-20 season.

Buffalo's one-goal deficit quickly became two just one minute into the second period when forward Valeri Nichushkin found Kadri streaking down the off-side of the play. Kadri took the puck from the left circle and wired it by Hutton high past his glove side to make it 3-1 Colorado.

3:23 later, the high-powered Avalanche went back to work as Zadorov beat Hutton five-hole with a backhand shot to extend their lead to 4-1.

Coming out of the intermission high off a late-first period goal Buffalo had a chance to capitalize on the momemtum they gained, but were unable to as as they continued to get the life squeezed out of them by Colorado

Things got worse just past the halfway mark of the second when Nichushkin was allowed to skate right down the slot and rip his ninth goal of the season past Hutton. It was the fifth goal of the evening for the Avalanche on just 13 total shots on goal.

That led to head coach Ralph Krueger pulling Hutton from the game and inserting backup Jonas Johansson into the game for his National Hockey League debut.

Johansson almost immediately found himself facing the same barrage that chased Hutton out of the game. The Avalanche top line flew into the Sabres defensive zone, led by Nathan Mackinnon, and he fed Mikko Rantanen, whose quick shot went off the post and in for Colorado's sixth goal of the night and fourth of the period.

There was nothing more than a delay of game penalty against the Avalanche in the third period of play, as the 6-1 score through 40 minutes stood as the final score.

The five-game homestand wraps up on Thursday night when the Sabres host the Detroit Red Wings at KeyBank Center. Puck drop is set for 7 p.m. with the Paul William Beltz Pregame Show on WGR starting at 6 p.m. with Mike Schopp and the Bulldog live from (716) Food and Sport.