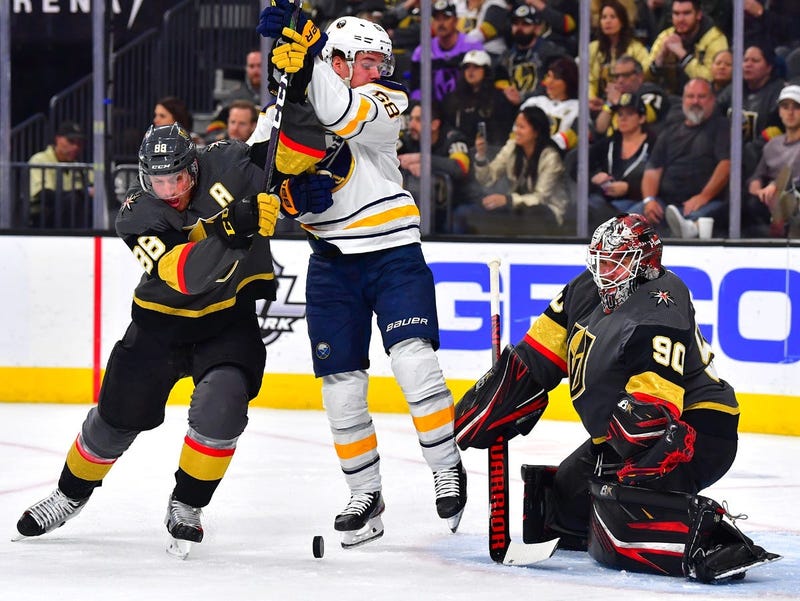 The Buffalo Sabres are off on Sunday after dropping their third straight road game on Saturday night to the Arizona Coyotes.

It was a crushing loss for the blue and gold that began the trip in Colorado with ideas of making their way back into the Atlantic Division playoff picture out of the trade deadline.

Instead, the deficit has increased as the Toronto Maple Leafs and Florida Panthers have picked up points while Buffalo has not. Saturday’s loss in Arizona followed a similar script to recent losses by the team. The blue and gold scored two goals in 44 seconds to open up a 2-0 lead in the first period. But a pair of goals in 53 seconds by the Coyotes in the middle frame led the way to five straight unanswered goals in a 5-2 win over Buffalo.

Marcus Johansson scored the first Buffalo goal on Saturday. He knew what went wrong for the blue and gold, saying that, “we kinda stopped playing instead of settling things down, and it kinda snowballed and they got three. I mean, you’re not gonna play a perfect game. It’s OK for them to score one, we just gotta settle down and get back to our game.” Jeff Skinner scored the other Sabres goal in the first period before the team gave up three in the second period.

Jack Eichel was still in his equipment and uniform when we he spoke with the media during the postgame on Saturday. He was visibly despondent, looking at the floor as he answered questions. When asked about the team showing flashes of good play on the road trip, he said that, “Yeah, I mean, 0 and three, no points, so there’s no real good moments.” In each of the first two games of the road swing, the Sabres were tied with their opponent heading into the third period.

The captain was brutally honest when asked about what went wrong, adding that, “start turning the puck over in our own end, not making hard plays, giving them second chances.” Eichel continued that the “big picture sucks. Obviously, you come to win every game you lose three, that’s not what you want to do.” Buffalo is currently 12 points behind the Maple Leafs for the final playoff spot in the Atlantic Division.

Head coach Ralph Krueger tries to always keep a positive spin, while sharing his honest opinion on the team’s effort. After the Sabres' loss on Saturday, he shared that, “it’s definitely just a lack of staying in the game that we need to play. Obviously we know here we’re in the third of four [games] where we had two really disappointing losses where we needed a lot of energy today, and we needed a lot of fight to be able to resist the speed that Arizona has and the attack that they have.”

Buffalo will travel to Winnipeg on Monday ahead of their road trip finale against the Jets at Bell MTS Place on Tuesday night. The Jets are have lost four of their last five games, including a 2-1 decision to Buffalo at KeyBank Center a week ago. Winnipeg is also dealing with several injuries, including Patrick Laine who did not play in Saturday’s 3-2 loss to the Edmonton Oilers.