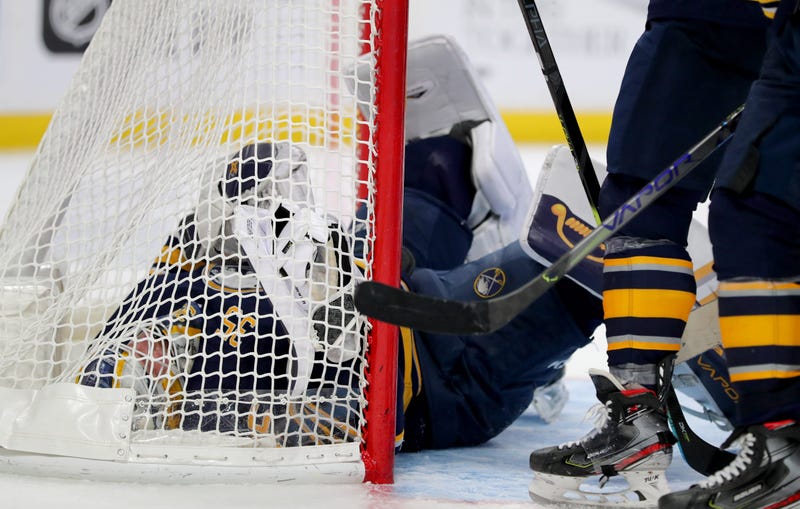 March 6, 2020 03/06/2020 8:38 pm
Buffalo, NY (WGR 550) - Linus Ullmark isn’t ready to start a game, but he will be the backup to Carter Hutton on Saturday night against the Philadelphia Flyers. Jonas Johansson was sent back to Rochester on Friday before practice.

Ullmark went down in the crease during the Ottawa game on Jan 28. He said he didn’t get caught in a rut on the ice, “It wasn’t the ice’s fault. I got stuck on the outside of the post and it was just a freak injury.”

With this type of injury, Ullmark has had to remain patient rehabbing while missing 17 games. He said it’s just what had to be done, “I’ve had good dialog with the medical teams during these weeks, so I had to know what I had to prepare myself for.”

Ullmark said one of the biggest differences between a goalie and a regular player is goalies have trouble putting extra padding into their equipment when they're injured.

It’s a lonely place for injured players as they rehab away from the team. Ullmark said that was very difficult for him, “That’s probably the biggest thing is you’re not really around the boys. You’re in your own bubble trying to work on the things that you need to work on to get back as soon as possible.”

Logical thought would say that if Ullmark is ready to backup, he should be able to start. Ralph Krueger said that’s not the process, “It’s just the next step as we’re being patient in this process and making sure he’s getting ready.

“We liked what we saw today. We liked his feedback from today.”

Zemgus Girgensons and Lawrence Pilut missed practice on Friday. Girgensons has a lower-body injury and Pilut is sick. Krueger said it’s a good chance the group on the ice Friday will be the group that plays.

Jack Eichel is in a career-high six game points slump. He's been fighting through a core injury and Krueger likes the guts his captain is showing, “Jack is showing a lot of character here and part of being a really good National Hockey League team is fighting through injuries and try to get yourself healthy while you’re playing, and our off-ice staff is working so hard to get him 100% up to speed. He keeps wanting to play and he wants to be an important part of the growth that we have, and let’s just hope we get him to 100% in the next few days.”