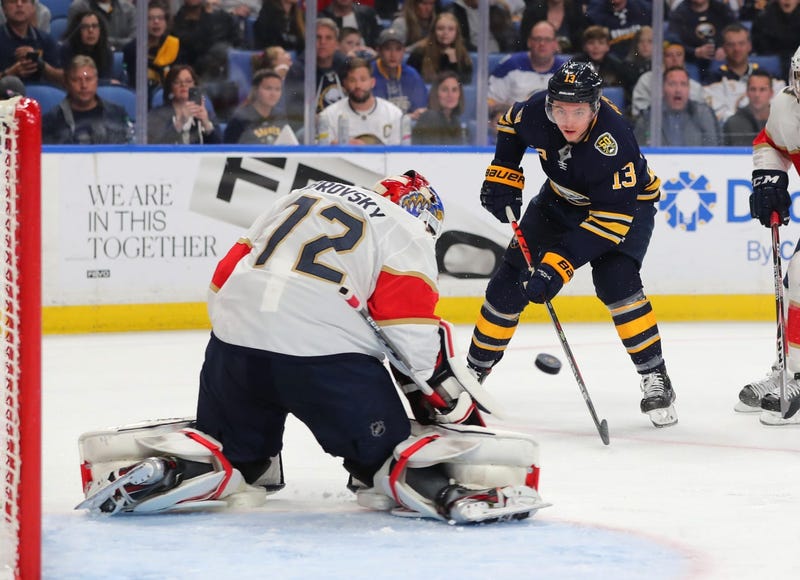 Buffalo visits Madison Square Garden on Thursday, which means Jimmy Vesey returns to New York for the first time. Vesey played three seasons with the Rangers before being traded to the Sabres, and he’s curious to what it’s going to be like, “I was saying the other day, I’ve never played against a former team before, so I’m excited for it. It’ll be good to see some familiar faces, not only players but trainers and staff, so I’m looking forward to it.”

Being a college player, Vesey had never been traded until now. He said, “It’ll be a little weird playing against some old friends.” That isn’t going to matter because the Rangers didn’t want him any more and he, of course, wants to score against them, “I’ll definitely come out hot I think, but after the first couple of shifts it’s just another game.”

Casey Mittelstadt has three goals and two assists for five points in his last three games, but it was a backcheck in overtime against San Jose that got him national attention. Kevin Weekes of the NHL Network was so impressed with how Mittelstadt got back to break up a 2-on-1, he highlighted it on his show. Vesey has been impressed lately with his center, “He’s done a really good job since our line has gotten going, he’s really shown what he can do.”

Vesey has two assists in those three games, while Conor Sheary has a goal.

Ralph Krueger said Vesey has done everything the coaching staff has asked of him without complaint. Krueger feels Vesey is the ultimate team first player. Vesey said, “I can be used in all situations, and so far this year, I’ve been on the PK and in more of a defensive role and whenever I’m on the ice. I’m going to take pride in that, so I thought it was a little bit of a slow start to the year, but I’ve liked the way I’ve come along in the past week in a half or so.”

Vesey went pointless in his first seven games with the Sabres and didn’t even have a scoring chance. That seemed weird for a guy that scored 50 goals in three seasons with the Rangers. In Los Angeles, that seemed to change. Vesey likes how the opportunities are starting to come, “Our ice-time has gone up and that’s because we’ve generated more and for me, I’ve had a lot of good looks and this is my fourth year and I’ve come to learn that sometimes it just doesn’t go your way, but I’m going to keep at it as our lines stayed patient in the beginning and now it’s coming to us.”

Buffalo averages 3.70 goals per-game, which ranks fourth in the league, while their 2.40 goals-against is sixth.

The power play has settled in at fourth overall, clicking at a 30.8% clip.

Jack Eichel has six goals and eight assists for 14 points. He’s fifth in the NHL and six points behind the scoring lead, which is held by Washington Capitals defenseman John Carlson.

Rasmus Dahlin has nine assists, which is sixth overall in the league.

Jeff Skinner has taken 49 shots this season, which is one shot behind league-leader Alex Ovechkin.

Carter Hutton’s .943 save percentage is fourth in the NHL, while his goals-against of 1.65 is third.

Not many were expecting the Rangers to be sitting at a points percentage of .357, which is 27th overall. They won their first two games against Winnipeg and Ottawa, and are 0-4-1 since.

They got the prized free agent in Artemi Panarin, but he only has four goals and six points in seven games. The Sabres will need to watch out for Panarin as he has 11 points in 10 career games against them.

New Jersey took Jack Hughes first overall in last June’s draft, and New York grabbed Kaapo Kakko with the next selection. Both have only scored one goal so far this season.

When healthy, Mika Zibanejad has been, by far, the Rangers' best player. He has 11 points in seven games, and his 1.57 points per-game is ranked fifth in the NHL.

Another big acquisition for the Rangers was acquiring defenseman Jacob Trouba from Winnipeg, and then signing him to a long-term contract. This reminded a little of the Kevin Shattenkirk signing. They have two totally different styles, but New York way overpaid for both.

Trouba is a very good defenseman, but is not worth near $8 million per-season. The nice thing is he’s only 25-years-old, so there likely won’t be wasted years at the end of the seven-year deal.

The Rangers have the fourth-worst goals-against in the league as a team.

Join Schopp and the Bulldog for the pre-game show starting at 6:00 when they’ll be joined by Krueger, Vesey and Vladimir Sobotka.