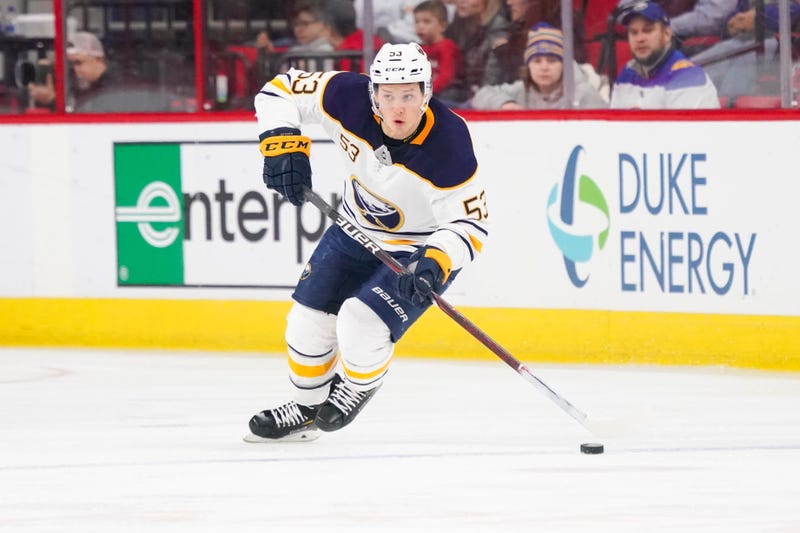 After a hot start to the 2018-19 season, the Buffalo Sabres have tailed off quite a bit in the standings and currently find themselves on the outside looking in of the playoff race.

Despite going 6-11-4 since the team's 10-game winning streak in November, there have been some positive takeaways from the Sabres' season to this point.

One of those bright sports has been the play of winger Jeff Skinner, who has continued to score and show his talents playing alongside Jack Eichel on the Sabres' top line. In 46 games played this season, the 26-year-old is second in the National Hockey League with 30 goals. Skinner is also second on the Sabres with 44 points in that span.

This offseason, Skinner is scheduled to become an unrestricted free agent on July 1 when his current contract expires. Reports have indicated that Skinner's representatives and Sabres general manager Jason Botterill have begun talks to try and get an extension signed before he becomes a free agent.

However, if he does not sign a deal and the Sabres continue their downward trend, there is a chance that he could be moved before the NHL Trade Deadline at 3 p.m. on Monday, February 25. There would be plenty of teams looking to add a player of Skinner's caliber as they push for the playoffs, but the price to acquire a goal-scoring winger such as him may be too high for a team to pay.

If the Sabres do start to turn things and remain in the hunt for a playoff spot, there is a possibility that Botterill will go out and try to improve the roster by acquiring an asset to help that playoff push. Right now, the Sabres could use a bevy of help in different areas on the ice, including a second line center, some secondary scoring, and maybe some additional help on the blue line.

Sportsnet's John Shannon took some time on Wednesday to join Howard Simon and Jeremy White on WGR to talk about the state of the Sabres, and also provide some news and notes from around the trade rumor mill.

"I have been hugely impressed, for the most part, with what Buffalo has done this year. What I would say is that the learning curve and the time it takes a team for a team to learn how to win is something that the Sabres are going through right now."

Shannon on the team's makeup:

"When you look at both [Vladimir] Sobotka and [Patrik] Berglund really not delivering, there's aspects of getting rid of Ryan O'Reilly that have hurt the team. That's just the fact. I still like what Jason [Botterill] did with that, I like the make up of the team much more. I'm a huge [Casey] Mittelstadt fan, so there's some patience to be taken."

Shannon on finding a No. 2 center at the trade deadline:

"Finding a No. 2 in this league is not easy. It's kind of like finding a puck-moving defenseman. You're much more able to find wingers, and fifth and sixth defensemen because everybody wants to give you their junk for your junk."

Shannon on the possibility of Rasmus Ristolainen's trade availability:

"I've been quite surprised with the amount of discussion in and around the game that, maybe, at a certain point, Ristolainen would be available. [That] shocks me. I just don't understand that. I think he's such a good player."

Shannon on his outlook of the Sabres prior to the 2018-19 season:

"I did not pick the Sabres to the playoffs, but I did think they would improve and they have exceeded my expectations. I think they are on the verge of being something really great, but now is not the time to change the course and panic. Now is not the time to go out and say 'we've got to get into the eighth position.' There's going to be lots of years to enjoy Jack Eichel, who has become a star in this league. Get Jeff Skinner signed. There are lots of things that this team has done right, so I would not change the plan yet."

Shannon a potential Skinner contract extension with the Sabres:

"I think he likes it [in Buffalo]. That's a positive. I think his family likes going to be able to watch him play more. Those are the intangibles that you can't measure, but you're talking between $9 and $10 million a year. You can't blow smoke with the fact that he's scored this many goals and has finally revealed that talent we saw early in Carolina, and now that he's playing with a really good centerman. [That's] something he had a difficult time doing in Carolina. He's blossomed again, so we could be talking around $70 million."