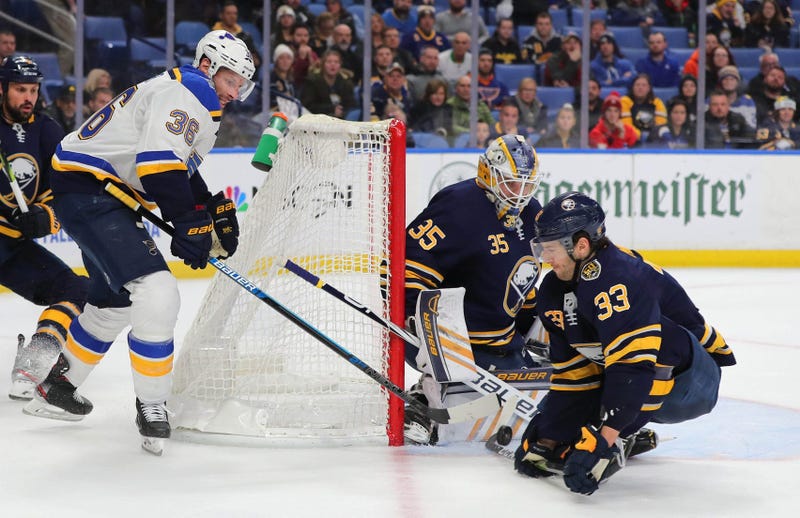 Buffalo won in Detroit on Sunday after losing six straight road games and nine out of 10.

Colin Miller has been in and out of the lineup after playing the Sabres' first 17 games. He didn’t dress for the last two, but Tuesday morning he was off the ice before Zach Bogosian and likely will play against his old team, the Vegas Golden Knights.

Miller has sat out 14 of the Sabres' last 29 games, and Ralph Krueger said he’s still learning what’s expected of him in the coach’s system, “Colin is continuing to adapt to what we want to see, and he has an ability to add an offensive punch, which we feel is still going to evolve here. You lose a little of your offense as you’re getting used to the defensive concepts and try to find your way within that system.

“I’m sure his offense will bloom as he continues to learn to be that player we need without the puck and he’s working hard at it.”

Miller doesn’t see what Krueger’s talking about. When I asked him if he’s still trying to get used to what the team is doing system-wise, he laughed and said, “I’m good with it. We got that down pretty quick once we were through training camp.”

The Sabres gave up a second round pick and a fifth round pick to get Miller in the June trade. The offense that Miller has produced has only amounted to one goal and five assists for six points.

Eichel is fourth in league goal scoring and eighth in points.

Evan Rodrigues scored his first two goals of the season against the Red Wings.

Vegas is fourth in the Pacific Division, but just one point out of first place. The Golden Knights lost the last three of their seven-game home stand. Vegas has given up 20 goals in its last five games.

Jonathan Marchessault may return after missing five games due to injury. Before Marchessault went out, he had scored six goals and nine points in nine games.

Max Pacioretty leads the Golden Knights with 20 goals and 45 points.

Join Schopp and the Bulldog for the pregame at 6:00 live from (716) Food and Sport when they’ll be joined by Krueger, Miller and Rodrigues.