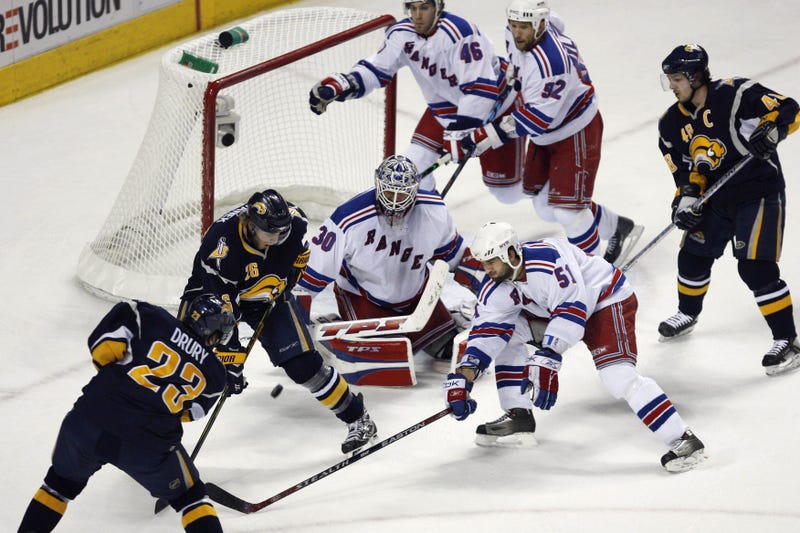 The Sabres and MSG are bringing back five classic games next week. All games start at 8 p.m.

On Monday, you’ll be able to see, what I thought was, Dominik Hasek’s best playoff game as a Sabre. Hasek made 70 saves against New Jersey. The game was played on April 27, 1994 and was Game 6 of the Eastern Conference Quarterfinals.

It took four overtimes to settle the score and Dave Hannan did the honors, beating Martin Brodeur on a backhand shot in front. Brodeur made 49 saves and gave up the only goal of the game.

New Jersey won Game 7 at home. The Sabres took a 1-0 lead on a goal from Philippe Boucher. New Jersey tied it on a Bruce Driver power play goal. Claude Lemieux scored the series winning goal in the second period. Hasek made 44 saves in that game, while Brodeur stopped 17.

MSG will pick Game 6 up in the third period.

Tuesday is from April 19, 1996 and is the final Sabres game ever played in the Aud. You’ll also get a chance to see a game against the Hartford Whalers.

On Wednesday, they fast-forward to 2006 and the team's 10-game winning streak. The win tied an NHL record for the longest winning streak to start a season. The game was in Long Island and featured a terrific performance from Ryan Miller.

On Thursday, the Sabres will show us the game from Madison Square Garden that was the first game after the September 11th attacks. Buffalo wore their white road sweaters, but had New York across the front of them.

On Friday, MSG will show Game 5 of the Eastern Conference Semifinals against the Rangers. Buffalo was the heavy favorite in that series, but had come home after dropping two straight games in New York by identical 2-1 scores. It was lucky for the Sabres that they had a cushion because they won the two games in Buffalo 5-2 and 3-2. Things weren’t looking great for the Sabres in this game at the arena either, but, well, I'll let you watch.