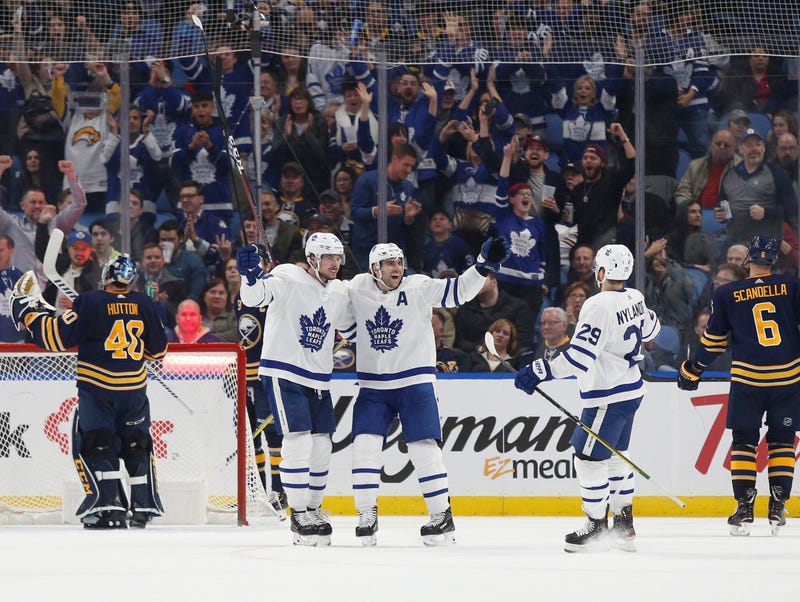 The Buffalo Sabres scored first, but three unanswered goals helped the Toronto Maple Leafs to a 4-2 win on Wednesday night at KeyBank Center.

The win for Toronto helps solidify a season sweep of the Sabres, which has not happened since the 1986-87 season when Buffalo finished the season with one tie and two losses to the Maple Leafs in three games.

Johan Larsson was called for the first penalty of the game when he was whistled for goaltender interference just over five minutes into the opening frame. However, the blue and gold killed off the minor without much issue. The best chance came right at the end of the power play for Toronto when Patrick Marleau was parked in front of the net. The shot from the point hit the outside of the goal post and then into the corner.

Toronto failed to score on their second power play of the game as well. However, Buffalo converted on their first chance of the game. Casey Mittelstadt was able to take advantage of some good passing by Jack Eichel and Rasmus Dahlin. The goal was Mittelstadt's 11th of the season and came with Zach Hyman in the penalty box for hooking.

Toronto was able to tie the game at 1-1 less than two minutes into the middle period when a puck sent to the front of the net hit off of Auston Matthews' skate and into the net. The forward's 35th goal of the season came as he was locked up with Brandon Montour at the top of the blue paint.

Zemgus Girgensons was penalized for cross checking midway through the second stanza. However, for the third time in the game, Buffalo was able to kill off the shorthanded chance. Eichel had the best chance for either team when he intercepted the puck in the defensive zone and tried going end-to-end.

A second chance opportunity for Toronto leads to the team's first lead of the night. William Nylander took a shot from the slot that hit the cross bar, and the rebound eventually found its way to the stick of John Tavares, who made it a 2-1 Leafs lead. The goal was Tavares' 41st of the season.

Toronto, once again peppered, Hutton in the shots on goal department. Their 19 in the second period brought the two period to total to 38 faced by Buffalo's netminder.

The Leafs extended their lead to 3-1 just seconds into the third period. Once again, it was a fortuitous rebound chance that hit off a skate in front of the net, but this time the puck glanced off of Rasmus Ristolainen's skate. Mitch Marner took the shot from the slot that eventually went in the goal for his 25th goal of the season just 22-seconds into the period.

Alex Nylander's first goal of the season with the Sabres trimmed the deficit to 3-2 in the third period. Vladimir Sobotka and Zach Bogosian were credited with the assists on the goal. The blue and gold had several more chances throughout the final period, but Sparks was able to keep the team from tying the game.

Hyman would score on an empty net for his 18th goal of the season and secure the 4-2 win for the Leafs. The goal was unassisted with less than a minute to go in regulation.

The blue and gold are on the road this Saturday against the Montreal Canadiens. Buffalo drops the puck in Montreal at seven o'clock on the flagship home of the Sabres Radio Network - WGR Sports Radio 550. Pre-game coverage with Brian Koziol begins as 6 p.m.