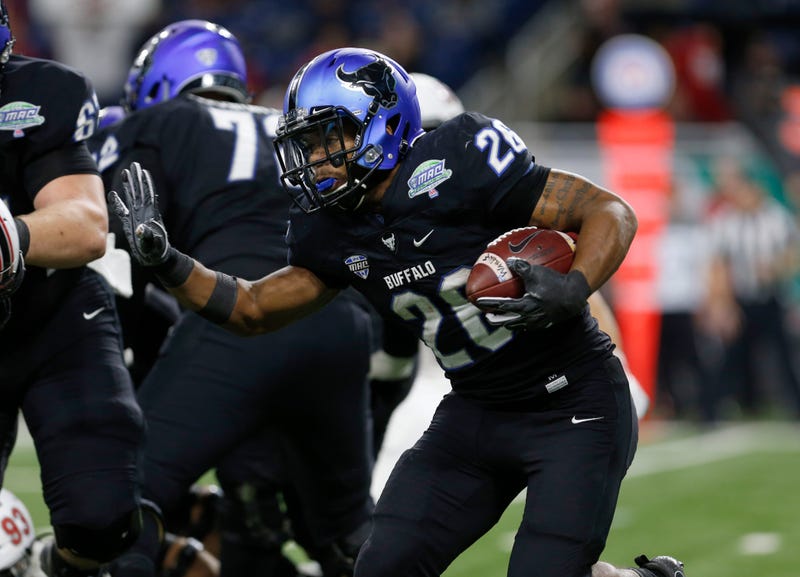 The win improves the Bulls’ record to 5-4 on the season, putting them above .500 for the first time since Week 1 following the victory over Robert Morris. Buffalo also boosted its conference record to 3-2, keeping them in the conversation for a Mid-American Conference Eastern Division title.

Quarterback Kyle Vantrease, arguably, put on his best performance to date in a Bulls uniform. The red-shirt sophomore finished the contest completing 15-of-23 passes for 208 yards and a touchdown, along with a pair of rushing scores as well.

A dominant first half helped Buffalo put Eastern Michigan away with relative ease, despite being down 7-0 early in the contest.

The Bulls got their first points on the board with a minute left in the opening quarter when Tyrece Woods Jr. and Chibueze Onwuka sacked Eastern’s Mike Glass III in the end zone for a safety. Buffalo carried that momentum into the second quarter as the offense exploded for 27 points and the defense put up, what seemed like, an impenetrable front.

Kevin Marks gave Buffalo it’s first lead, one they would not relinquish, with a nine-yard rushing touchdown early in the second quarter to cap-off an 11-play, 61-yard drive that put the Bulls ahead 9-7.

Buffalo’s defense forced Eastern to go three-and-out on the drive following Marks’ score. Things quickly went from bad to worse for the Eagles as punter Jake Julien fumbled the snap on fourth down and threw the ball away, resulting in an intentional grounding call and placing the Bulls at Eastern Michigan's 25-yard line to start their drive. Four plays later, on a 4th-and-1 play, Vantrease busted out a 16-yard touchdown run that appeared to catch everyone in an Eagles uniform off guard.

Vantrease and the offense were back on the field 65-seconds later after the Bulls defense forced another Eastern three-and-out. In less than two minutes, Buffalo put a six-play drive together that included a pair of receptions from tight end Zac Lefebvre and a 15-yard catch-and-run from Daniel Lee, that was capped-off by a one-yard rushing touchdown from Vantrease to extend the Bulls lead to 22-7.

The Bulls tacked-on to their lead before halftime, thanks in part to a third consecutive three-and-out drive from the EMU offense. Vantrease found Lee for a gain of 33 yards through the air to get the Bulls inside the Eagles' red zone with under a minute to go in the second quarter.

Vantrease successfully completed the drive when he dropped a perfect pass in the back corner of the end zone to Antonio Nunn, who made a great catch and kept a foot in bounds for the play to count. The junior was the Bulls' leading receiver in the game, finishing with seven catches for 87 yards to go with his touchdown.

Nunn’s highlight-reel score put the lid on what was a fantastic first half for the Bulls. Aside from the early touchdown, the defense was lock-down, allowing just five rushing yards (four coming on the final play) and limiting Eastern’s possession time to just over seven minutes in the first half. In return, the offense put up 29 unanswered points and totaled 322 total yards (185 pass, 137 rush).

The story stayed the same in the second half, as the Bulls stood pat to thwart any sort of comeback by the Eagles.

Jaret Patterson got in on the scoring thanks to a one-yard touchdown run in the final minute of the third quarter, stretching the Buffalo lead to 36-7. Patterson led the game with 160 rushing yards on 33 carries. Patterson and Marks combined for 250 yards out of the Buffalo backfield, as the latter racked up 90 yards on the ground on 21 carries to go with his touchdown in the first half.

Aapri Washington recorded the only turnover in the game for either side when he intercepted Eastern’s Preston Hutchinson midway through the fourth quarter. On the ensuing drive, Patterson added to the Bulls lead with another one-yard touchdown run to put them up 43-7 with 6:19 left in the final frame.

The Eagles cut into the deficit with a late touchdown run from Hutchinson, but the game was well out of reach by then.

Buffalo completely dominated Eastern in time of possession, holding the ball for 41:36, compared to the Eagles’ 17:36. The Bulls offense also more than doubled the production of its counterpart’s, totaling 460 yards on 85 plays to Eastern’s 210 yards on 42 plays. The Bulls also picked up 26 first downs to Eastern’s six. However, the biggest takeaway from the game may be the Bulls’ offensive execution; the unit recorded six touchdowns in seven trips to the Eastern Michigan red zone.

The Bulls will have a bit of down time next week as they’re on a bye. Buffalo will return to action on Thursday, November 14 when they take on MAC East rival Kent State (3-5, 2-2) in Ohio. Kickoff from Dix Stadium is scheduled for 7 p.m. and you’ll be able to listen to the full game, along with pre-game and post-game coverage on ESPN 1520, the radio home of the Buffalo Bulls.