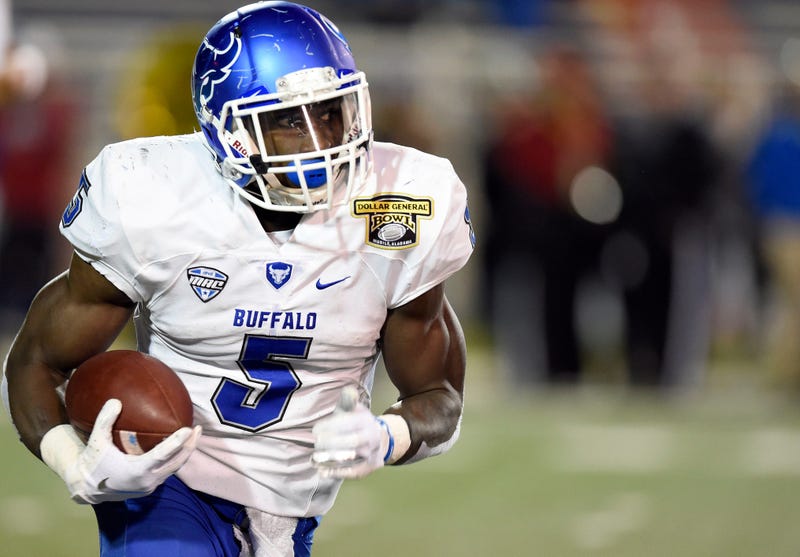 The University at Buffalo football team will make the program’s third trip to Happy Valley, Pennsylvania this weekend for a clash with the No. 15 Penn State Nittany Lions. The hosts from the Big Ten are coming off of a 79-7 drubbing of a victory over Idaho last Saturday, and will certainly be a tougher opponent for the Bulls than Division I-AA Robert Morris.

Beaver Stadium won’t be unfamiliar territory for Bulls head coach Lance Leipold, as he and his staff were in their first season at UB when the Bulls last played at Penn State in 2015. However, for the players, Saturday’s game will be a totally new atmosphere. Not one member from the 2015 team remains on the current roster.

“We have to play within ourselves,” Leipold said at his weekly press conference on Tuesday. “We have to keep our composure. We’ve said it many times in these types of settings, as well as weekly in our [position] rooms, you have to trust your training. You can’t try to go out and do anything out of the ordinary.”

One player who will be leaned on to keep his composure, and may have a tough time doing so, is Bulls' red-shirt freshman quarterback Matt Myers. While he did get a victory under his belt in his collegiate debut, Myers threw just 10 passes against Robert Morris, completing five for 69 yards and two touchdowns.

In regards to if the Bulls will throw the ball more than 10 times against Penn State, Leipold said to “pretty much count on that.” However, he also said they still plan to establish the run game with the duo of Jaret Patterson and Kevin Marks, who finished with 90 and 75 yards on the ground respectively against Robert Morris.

“It’s going to be a great day for Matt in the fact that he’s going to grow a lot in this game,” Leipold stated. “But again, for a red-shirt freshman making his second career start, you can’t just put it all on him.”

The ruckus crowd of 106,000-plus fans at Beaver Stadium will certainly be something the Bulls are not used to. To help prepare, Leipold admitted he’s been piping in crowd noise through the PA system at practices in order to hopefully get the players acclimated to that type of environment. Leipold also knows the opponent on the actual field is no slouch, and game planning for this talented Nittany Lion group is no easy task.

“There weren’t many weaknesses,” Leipold said when asked about what he saw on the film of Penn State’s win over Idaho. “[Penn State] just kept rolling in guys with different numbers and continued having success. They used five to six running backs, three quarterbacks, rotated many guys on the line; that’s probably one of the bigger differences from the last time we went there. Coach [James] Franklin and his staff have done an outstanding job in recruiting at the national level. They’ve increased their team speed and athleticism. Their length at some positions like outside linebacker and defensive end has improved. They just take up a lot of space and they all can run. It’s going to be a great challenge and great preparation is needed to go in there.”

Penn State quarterback Sean Clifford is an individual the Bulls will surely need to prepare for. The red-shirt sophomore, who replaced Trace McSorely, one of the program’s best quarterbacks in it’s history, saw just a little over a half of action against Idaho, but still managed to put up an impressive stat line, completing 14-of-23 passes for 280 yards and two touchdowns, along with 57 yards on the ground on seven rushes.

“You have to be able to put pressure on him and give him some different looks,” Leipold said of Clifford. “He showed great composure in his first start and you can see why he won the [starting] job. He’s big, strong, has a good arm, and makes plays with his feet as well, so that’s going to be a huge challenge. Can you completely take guys out? Probably not. But we’ll have to be able to slow him down.”

Saturday’s game will be the first time the Bulls play on national television on FOX. The matchup is also in primetime, setting an even bigger stage for a program that is still trying to elevate itself in the college football landscape. UB also has an opportunity to defeat a Big Ten school for a second consecutive year. Last season the Bulls won at Rutgers to earn their first-ever victory against the conference.

“These are opportunities that don’t come around all the time for our program,” Leipold said. “This is something we’ve been striving to be a part of. I want to commend our players, past and present, because [FOX] chose to put this game on in primetime, and it could’ve been slotted at a different time. It’s a credit obviously to Penn State and the team that they have, but I hope that when people looked at things, they noticed how we played the last few seasons, especially last year, and our guys should be proud of that.”

Kickoff for Saturday’s game is scheduled for 7:30 p.m. You can hear all the action on ESPN 1520, with complete pre-game and post-game coverage as well.