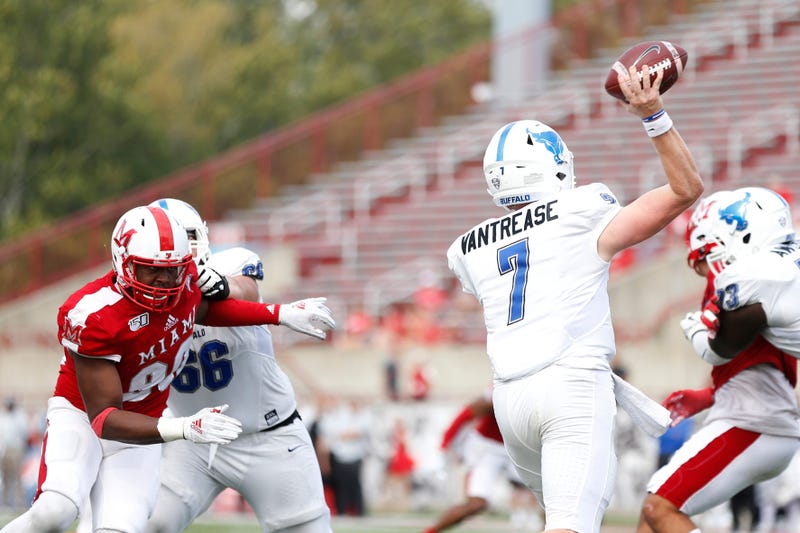 The University at Buffalo football team will host their first Mid-American Conference game of the season on Saturday afternoon when the Ohio University Bobcats come to town. The Bulls are still looking for their first conference win in 2019 after coming up short at Miami (Ohio) last weekend.

In their most recent meeting last November, the Bobcats ran the Bulls right out of Athens, amassing 437 rushing yards as a team en route to a 52-17 victory. Luckily for the Bulls, A.J. Ouellette, who accounted for 196 of Ohio’s rushing yards in the game last season, graduated and will not be on the other side of the field this weekend.

Similar to the 2-3 Bulls, the Bobcats aren’t off to the hottest of starts this season. Despite the fact that they finished second in the MAC East Division last year right behind UB, Ohio currently sits at 1-3 following losses at Pittsburgh, at Marshall, and at home to Louisiana. Ohio’s lone win so far came at the hands of Rhode Island in their first game of the season. However, as he’s said before in similar past situations, Bulls head coach Lance Leipold isn’t taking the opponent’s record into account too much.

“They’re still a very good football team,” Leipold stated during his weekly press conference. “I think sometimes it takes a little bit to get in rhythm with everyone. Much like many of us in our conference, don’t get fooled by the record… They’re a big team, extremely athletic, would have the most team speed in our conference. So, there are a lot of factors in there, and now [coming off a bye week] they’ve had two weeks to prepare for us. We know they’re going to be ready. They’ve worked out some kinks, and we’ll get their best shot.”

Ohio may benefit from having a bye last week, but the Bulls also may gain somewhat of an advantage being back at home, a place where they haven’t lost yet this season. But, on the negative side, there is also a chance Buffalo will be without starting quarterback Matt Myers, who suffered an upper-body injury in the Miami game and did not practice on Monday, Tuesday, or Wednesday. If the red-shirt freshman is unable to go on Saturday, backup Kyle Vantrease, a red-shirt sophomore who lost the starting job to Myers in the spring and has taken over punting duties since Evan Finegan’s leg injury last month at Penn State, will have to step back in under center to fulfill the play calling duties. Vantrease played in six games between the 2017 and 2018 seasons.

“You have to really tip your cap to Kyle Vantrease on how he’s handled things, really what he’s done in this program since he’s been a part of it,” Leipold said. “I’ll say this about Kyle, he’s handled everything very well. He’s well prepared. [Quarterbacks coach] Jim Zebrowski does a great job, and I always think how we prepare things. The preparation is always there for guys. Obviously, the reps aren’t always equal, but I know he’s going to make the most of his opportunity.”

No matter who ends up under center for the Bulls on Saturday, the run game will most likely be leaned upon once again. Buffalo currently leads the nation in rushing attempts with a total of 256. So, while two of the top passing targets in receiver Antonio Nunn and tight end Zac Lefebvre will be making their respective returns to the field from injury, expect running backs Jaret Patterson and Kevin Marks to be featured heavily once again.

Ohio’s defense has given up an average of 208.5 yards per-game so far this season, which ranks them 112 out of the 130 FBS programs. The matchup between the UB running backs and the Bobcats defense could be a lopsided one, possibly giving the Bulls an edge in the game. But, due to their inconsistent play and up-and-down results, it’s hard to predict what kind of performance we’ll see from Buffalo on Saturday.

“We feel we can line-up with anyone in our league and have a chance to win,” Leipold said. “And equally, anyone that’s on our schedule can beat us. That’s pretty much what happens in our conference. But where we are as far as experience, we have to be able to sustain consistency for us to have a chance to win on Saturday.”

Opening kickoff at UB Stadium is scheduled for 3:30 p.m. on Saturday. The game can be heard on the radio home of the Bulls – ESPN 1520 – along with pre-game and post-game coverage. It will also be available to stream on ESPN+ for subscribers.