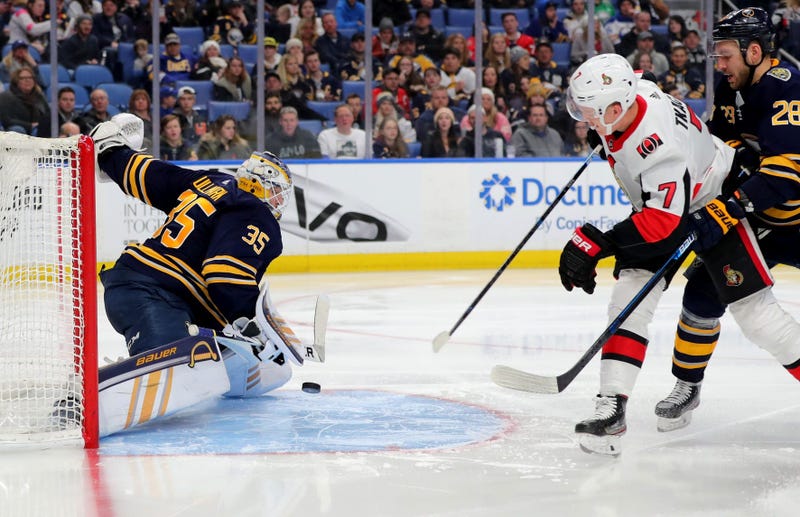 The Buffalo Sabres took to the ice at Bell MTS Place for practice on Monday afternoon, fresh off the plane from Phoenix, Arizona, and still fresh off their third straight loss of the road trip.

The team did get some good news with goalie Linus Ullmark joining the blue and gold for the first time since suffering a lower-body injury back on Jan. 28. The goaltender took part with Carter Hutton and Jonas Johansson, but will not be ready for when the team plays the Winnipeg Jets on Tuesday.

The goalie was happy to be back with his teammates more than anything, saying “it’s more to be being around the boys, I think that’s the biggest thing for me” Ullmark continued, “when you’re injured, you’re kind of in your own bubble trying to work on things that you need to do to get back as soon as possible. You don’t really hang around with the boys anymore, so that’s one of the things that I really enjoy doing.” The goaltender is 16-14-3 in 33 starts for the Sabres this season.

Head coach Ralph Krueger thought that Ullmark looked better than expected, adding that it “is the next step for him, to see NHL shots. There’s only so much our rehab team can do as far as getting a goalie ready, so it’s important to get him into practices” Krueger continued “it’s the beginning of the next phase.” He added that Ullmark is not an option to go in goal against the Jets.

Krueger also praised the effort level of his team during the skate. The team had a full day off on Sunday before leaving for Manitoba. After practice, the bench boss said that, “we like the spirit of the group right now. Yes, we’ve lost a few in a row right now, but you don’t feel it in this group. They have a lot of fight in this group, and I know we’re going to be fighting hard here in this building tomorrow." The Sabres beat Winnipeg at KeyBank Center last Sunday, 2-1.

The forward lines remained the same as the past two games of the road trip, with Olofsson joining Jack Eichel and Sam Reinhart. Michael Frolik worked in as the extra forward throughout the practice. The other lines were:

Krueger said that the defensive pairings will be determined on Tuesday. Lawrence Pilut and Colin Miller alternated with Jake McCabe during the skate. The other blue line pairings were:

The Jets are dealing with a rash of injuries. Patrik Laine will take part in Tuesday morning's skate to test out his injured foot, according to head coach Paul Maurice. He missed Saturday night’s 3-2 loss to the Edmonton Oilers after blocking a shot late in the team’s win last Thursday.

Winnipeg has not played since their loss on Saturday night.