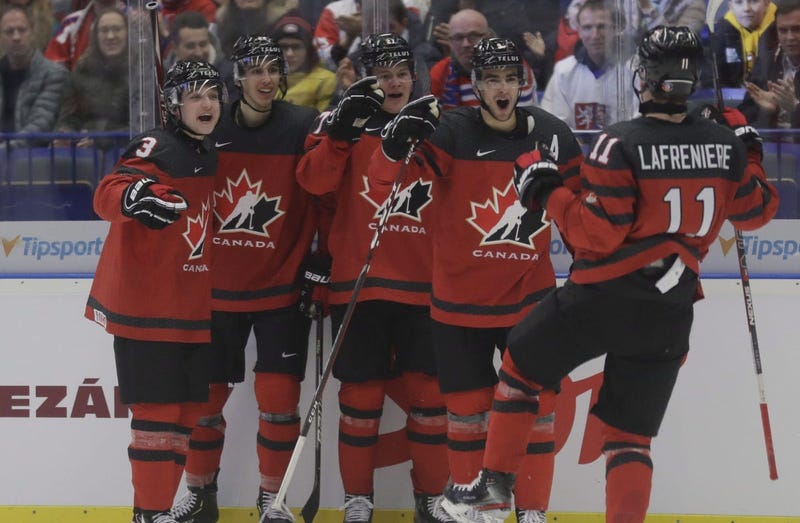 The 2020 IIHF World Junior Championship kicked off on Thursday in the Czech Republic with four games on the docket that featured three of the four Sabres prospects taking part in the tournament.

The first game of the tournament featured Matej Pekar and the host Czechs taking on Russia in Ostrava, and also featured the first upset victory of this year's event.

It was the Czech Republic striking first just 2:46 into the game as defenseman Simon Kubicek (2020 NHL Draft) wired a one-time slap shot from the point past Russian goalie Yaroslav Askarov (2020 NHL Draft) to give the hosts a 1-0 lead.

The lead was extended to 2-0 nearly five minutes later when the Russians turned the puck over in the offensive zone, allowing the Czechs to break out with a 2-on-1 rush. This time, it was Jan Mysak (2020 NHL Draft) who was able to fire a high shot on the rush over the right glove hand of Askarov.

The Russians responded with two goals before the intermission to tie the game at 2-2.

Defenseman Yegor Zamula (Philadelphia Flyers) as able to outwait a Czech defender trying to block a shot, and fire a shot through traffic past goalie Lukas Dostal (Anaheim Ducks) to cut the deficit to 2-1. A little more than four minutes later, it was Vasili Podkolzin (Vancouver Canucks) who tied the game with a power play goal in front of the Czech net off a rebound.

After the Czechs and Russians went back-and-forth with goals to make it a 3-3 game in the second period, it was the host nation taking the lead for good on the power play at the 17:25 mark. Just four seconds into a 5-on-3 man advantage, it was defenseman Jan Jenik (Arizona Coyotes) firing a wrist shot over the glove hand of Askarov for the 4-3 lead.

The Russians tried to change the tide of the game to start the third period by making a goalie change, replacing Askarov with Amir Miftakhov. Russia responded with some good offensive pressure, firing 10 shots on Dostal to the Czech's five shots, but neither team could find the back of the net in the final period.

Pekar had one good scoring chance in this game, breaking free for a partial chance alone on Askarov, but he was robbed with a nice glove save. Overall, he finished the game with one shot on goal and a penalty taken in 13:01 of ice-time.

Pekar with a chance to break the tie, foiled by Askarov. pic.twitter.com/dD2xatGzW2

Later in the day in Ostrava, it was one of the best rivalries in hockey taking place between the United States and Canada.

Heading into the contest on Thursday, the U.S. was riding a four-game winning streak against the Canadians, with their last win coming in the 2018 IIHF World Junior Championship in the outdoor game at New Era Field.

Team USA came out flying in the first period with two goals to head into the intermission up 2-0.

The opening goal came on the power play as Shane Pinto (Ottawa Senators) was able to re-direct a point shot from defenseman Zac Jones (New York Rangers) that beat goalie Nico Daws (2020 NHL Draft) to give the U.S. the 1-0 lead. Near the end of the period, forward Trevor Zegras (Ducks) made a nice play to get the puck between his legs to a spot where he could dish a nice pass across the ice to Arthur Kaliyev (Los Angeles Kings), who fired home a one-timer for his first goal of the tournament.

However, the script was flipped in the second period as Canada took over to take the lead thanks, in large part, to the power play.

Three-and-a-half minutes into the second, it was Connor McMichael (Washington Capitals) who got past the U.S. defense and was able to tap in a pass from Akil Thomas (Kings) through the five-hole of goalie Spencer Knight (Florida Panthers).

The Americans then started to get into penalty trouble, starting with a Pinto penalty at the 6:34 mark of the period for holding. It took the Canadians just seven seconds to convert as forward Barrett Hayton (Coyotes) fired a one-time feed from the top of the right faceoff circle and over Knight to tie the game at 2-2.

Five minutes later, the U.S. headed to the box again as defenseman Cam York (Flyers) was penalized for interference. With nearly 30 seconds remaining in the power play chance, forward Nolan Foote found some space at the right faceoff dot and wristed a shot over the shoulder of Knight to give Canada the lead.

With time close to expiring in the period, Pinto thought he had his second goal of the game to tie the game at 3-3, but after review, time had expired on the clock before the puck was in the net.

The third period started with another U.S. penalty a little more than halfway into the frame as defenseman Spencer Stastney (Nashville Predators) went to the box for hooking. With 37 seconds gone in the man advantage for Canada, they took a 4-2 lead as Barrett was able to net his second goal of the game with a one-time snap shot off a nice feed from Alexis Lafrenière (2020 NHL Draft).

However, the Americans were not dead yet as forward Nick Robertson (Toronto Maple Leafs) responded just 1:58 later with a goal that found its way through the legs of a Canadian defender and past Daws.

Three-and-a-half minutes later, Canada found themselves in penalty trouble again, giving the Americans the chance to tie the game at 4-4. It took the U.S. just 27 seconds to tie the game as Pinto scored his second goal of the game right next to the Canadian net off a feed from Robertson.

That tie lasted just seven seconds as Lafrenière was able to force a turnover in the U.S. zone from defenseman K'Andre Miller (Rangers), walk in alone on Knight and he just barely slid the puck around the right leg of the American netminder.

The Americans eventually pulled their goalie to try and tie the game in the dying moments of the game, but Canada put the game on ice with 1:10 to play with an empty net goal from forward Ty Dellandrea (Dallas Stars).

Sabres prospects Mattias Samuelsson (USA) and Dylan Cozens (Canada) went head-to-head in this matchup, but it ended up being the 2019 first round pick coming out on top. Samuelsson was held off the scoresheet for the Americans, as the defenseman registered a shot on goal in 17:36 of total ice-time. As for Cozens, he was technically held pointless in 13:58 of total ice-time, while picking up three shots on goal and winning all three faceoffs he took. However, he was on the ice for both of Canada's power play goals in the second period, and should have been credited with a pair of secondary assists.

Buffalo's other prospect in the tournament did not even dress for their team's opening game of the tournament, as goalie Erik Portillo was the third goalie for Sweden in their 3-2 overtime win over Finland.

With the win, Sweden's unbeaten streak in preliminary round play was extended to 49 games, with the last loss coming in the 2007 IIHF World Junior Championship to the United States.

The game-wining goal in overtime came off the stick of Alexander Holtz (2020 NHL Draft), who was able to get a shot on goal that went off the glove of goalie Justus Annunen (Colorado Avalanche) and in with just five seconds remaining in the overtime period.

However, the goal of the game, and could be the goal of the tournament, came in the early part of the second period when Sweden forward Nils Höglander (Canucks) was able to net a lacrosse-style goal to tie the hockey game at 1-1. Höglander is no stranger to this move, as he was able to pull the move off earlier this season in a Swedish Hockey League game while playing for Rögle BK.

In the other opening day action on Thursday, Switzerland was able to take down Kazakhstan by a 5-3 score in Třinec.

Friday will feature two games on the schedule, starting with Slovakia opening their tournament action against Kazakhstan in Třinec. The second game of the day will feature the United States, who will look to rebound from Thursday's loss with a win over Germany, who are making their first appearance in the Top Division of the IIHF World Junior Championship since the 2015 tournament in Canada.