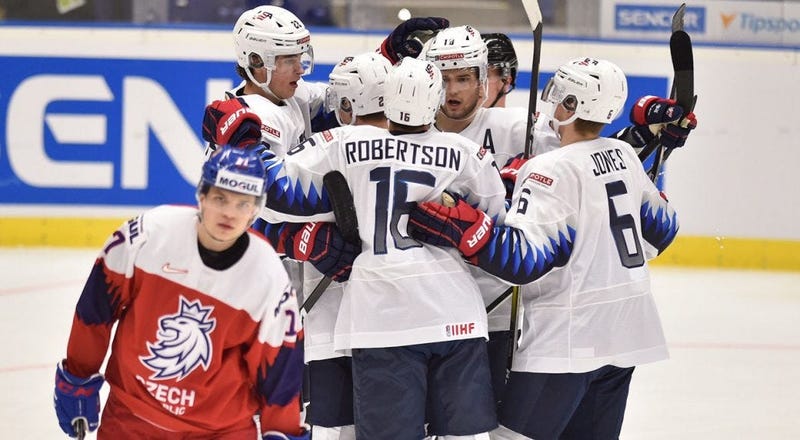 Group B of the 2020 IIHF World Junior Championship continues to provide some thrilling finishes as the United States and Canada both come away winners once again in Ostrava, Czech Republic.

The day started with Canada taking on Germany with the opportunity to rebound from a 6-0 loss to the Russians on Saturday. Germany was hoping to keep their winning ways going after upsetting the Czech Republic earlier in the day on Saturday.

It was the Canadians who struck first at the 11:50 mark of the opening period as Nolan Foote (Tampa Bay Lightning) converted off a rebound from defenseman Kevin Bahl (New Jersey Devils) to the top corner of the net over the shoulder of goalie Hendrik Hane. For Foote, it was his second goal of the tournament.

With a little more than 12 minutes gone in the second, Foudy skated in from the point was able to use a screen from Buffalo Sabres prospect Dylan Cozens in front of Hane to up Canada's advantage. The goal was Foudy's first tally of the tournament.

Nearly two minutes later, Cozens won a faceoff at the start of a 5-on-3 power play for the Canadians, which eventually led to Addison blasting a slap shot past the glove hand of Hane.

Canada carried the 3-0 lead late into the third period until Germany struck with their own 5-on-3 man advantage. With 1:07 to go in regulation, forward Yannik Valenti one-timed a shot off a feed from forward Tim Stützle (2020 NHL Draft) and just through Hofer to break up the shut out.

Germany attempted to get set up and try to get another goal before the final horn, but Canada sealed the game with an empty net goal for forward Ty Dellandrea (Dallas Stars) with 10 seconds remaining.

As for Cozens, he finished the game with his one assist, while also registering two shots on goal, a plus-2 rating, and a faceoff percentage of 80% in 17:50 of total ice-time.

In the second game of Group B action, Team USA took on the host Czechs in their final game of preliminary play with a chance to take the top spot in the group standings.

The Americans took advantage of an early power play chance to grab the 1-0 lead when Shane Pinto (Ottawa Senators) set himself up in front of the Czech net and converted on a nice feed from Nick Robertson (Toronto Maple Leafs).

However, the Czechs tied the hockey game near the halfway point of the period as captain Libor Zabransky fired a wrist shot from the point that found its way through multiple screens in front of goalie Spencer Knight (Florida Panthers) and in.

Zabransky was not done in the period as he put the Czechs up 2-1 with a power play goal with just 1:44 remaining in the opening frame. This time, Zabransky crept up to the side of the net from the point, and he was able to tap in a nice pass from forward Michal Teply (Chicago Blackhawks) past the right leg of Knight.

The U.S. heavily outshot the Czechs, 17-9 in the first period, but found themselves trailing the host nation.

However, it didn't take long for the Americans to tie the game as on a delayed penalty call to the Czechs, forward Arthur Kaliyev (Los Angeles Kings) fired a shot from a weird angle that ended up hitting the back bar of the goal and quickly coming out of the net. The officials originally waved the goal off, but deemed it a good goal after a further review.

Nearly five minutes later, the U.S. re-took the lead thanks to a goal from Jack Drury (Carolina Hurricanes) off another beautiful set up from Trevor Zegras (Anaheim Ducks). The Czechs got caught puck watching as Zegras got the puck along the right boards, which allowed Drury to go to the net. Zegras saw Drury in prime position to score, and ended up feeding him with a spin-o-rama pass to the left side of the Czech net.

For Zegras, it was his ninth assist of the tournament, and his nine points through the four games of preliminary play leads the entire tournament for scoring.

That 3-2 lead held for the Americans into the third period, but the Czechs had an answer to tie the game.

Just before the tying goal, the Czechs thought they had scored as defenseman Simon Kubicek (2020 NHL Draft) wired a shot from the point through a pile of bodies in front of Knight and in on a delayed penalty to the Americans. However, the goal was disallowed after review showed that forward Ondrej Pavel made contact with Knight at the top of his crease and disrupted him just enough to make the save.

However, the U.S. was still penalized after the disallowed goal and with 16 seconds remaining in the man advantage, the Czechs capitalized with forward Petr Cajka putting home a rebound off a Kubicek shot to the left of Knight in goal.

Things remained even through the remainder of regulation, which helped give the Czechs a much needed point with the hopes of avoiding relegation in Group B.

At the 3:14 mark of the five-minute overtime period, the Americans ended things as Cole Caufield (Montreal Canadiens) finally found the back of the net with his first goal of the tournament. Caufield was able to cap off a beautiful give-and-go passing play with his teammate at the University of Wisconsin, Alex Turcotte (Kings).

Cole Caufield with the give-and-go to win it for USA in OT pic.twitter.com/cRBBuLTJUh

Sabres prospect Mattias Samuelsson was heavily relied upon for the Americans on the blue line once again, leading all defensemen in ice-time at 20:15. He also registered one shot on goal, and also picked up a pair of penalties in the win.

As for Sabres prospect Matej Pekar, the Czech forward played more of a limited role once again with just 9:57 of total ice-time, while picking up two shots on goal in the loss.

With the win, Team USA completes preliminary play with a 2-1-0-1 record and eight points in the Group B standings. The Americans can not finish any worse than second in the group, and will either take on the third place team or the fourth place team from Group A in the quarterfinals.

Speaking of Group A action, things kicked off in Třinec with Sweden continuing their unbeaten streak in preliminary play with a dominant 6-2 win over Kazakhstan.

Sabres prospect Erik Portillo has yet to dress for the Swedes in the tournament as he was listed as the team's third goaltender for a third consecutive game.

With the loss, Kazakhstan has been placed in the relegation round, where they will await the last place team from Group B.

In the later game in Group A, Switzerland was able to down Slovakia with ease in a 7-2 win.

The Swiss were able to use their second line to power through the Slovaks, thanks to two goals from Gilian Kohler, a goal from Valentin Nussbaumer (Arizona Coyotes), and a goal from Matthew Verboon.

With the loss, Slovakia has locked themselves into the fourth seed in Group A and will face the top seed from Group B in the quarterfinals.

Preliminary round action wraps up on Tuesday with four games in action.

Group A gets started with Sweden taking on Slovakia at 9 a.m. EST, followed by Switzerland taking on Finland at 1 p.m. EST in Třinec. In Group B, Russia will face Germany at 9 a.m. EST with the loser likely to head to the relegation round against Kazakhstan. Then at 1 p.m. EST, the Czech Republic will take on Canada with the Canadians looking to take the top seed in Group B with any type of win.