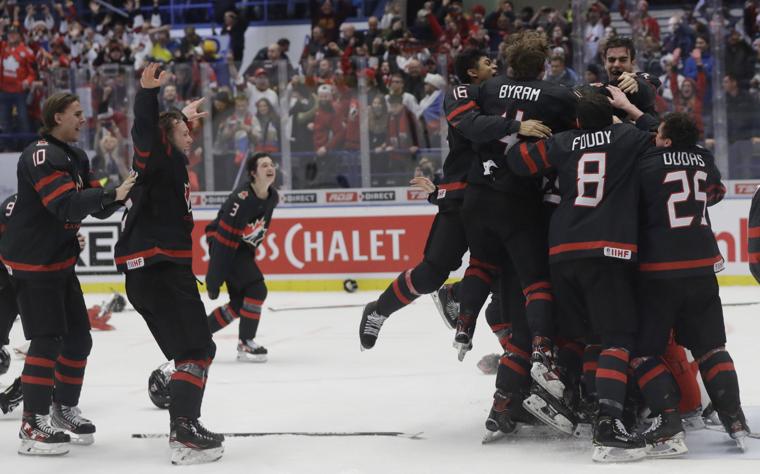 It was a Golden Sunday for Canada at the 2020 IIHF World Junior Championship in Ostrava, Czech Republic as the Canadians claimed their 18th gold medal with a 4-3 win over Russia.

Canada faced a 3-1 deficit with 11:14 remaining in the third period, but the Canadians responded with three goals in a span of 6:42 to take the lead and down the Russians.

After a scoreless first period of play at Ostravar Aréna, the Russians struck first thanks to a re-direction power play goal from forward Nikita Alexandrov (St. Louis Blues) in front of the Canadian net. With Canadian captain Barrett Hayton (Arizona Coyotes) in the box for a questionable holding the stick penalty, Alexandrov was able to get a piece of a point shot from defenseman Yegor Zamula (Philadelphia Flyers), and the puck ended up sliding through the five-hole of goalie Joel Hofer (Blues).

However, the Russians found themselves in some major penalty trouble as they were called for two separate penalties on the same shift to defenseman Daniil Zhuravlyov (Colorado Avalanche) and forward Dmitri Voronkov (Columbus Blue Jackets).

It took Canada just 22 seconds to tie the hockey game on the two-man advantage as Buffalo Sabres prospect Dylan Cozens jammed in a rebound off a shot from forward Alexis Lafrenière (2020 NHL Draft) to the right of goalie Amir Miftakhov for his second goal of the tournament.

YOU JUST LOVE TO SEE IT.pic.twitter.com/eZBXaKo7B2

Just 3:45 later, the Russians re-took the lead as captain Grigori Denisenko (Florida Panthers) stuck with a rebound chance in front of the Canadian crease and banged in his third goal of the tournament.

Russia's hard work paid off at the 8:46 mark of the third when forward Maxim Sorkin found himself with space in the right faceoff circle and fired a wrist shot under the blocker of Hofer to make it a 3-1 game. Canadian defenseman Jared McIsaac (Detroit Red Wings) attempted to get in front of the shot to block the puck, but at the same time, impeded the vision of Hofer from seeing the shot all the way.

The Canadians got a little lucky just 34 seconds later as forward Connor McMichael (Washington Capitals) cut the deficit to one when he was able to get a piece of a Calen Addison (Pittsburgh Penguins) shot towards the net with his skate and into the net. The officials ended up reviewing the goal to determine if there was a distinct kicking motion, but the goal stood for Canada.

The Russians gave Canada its opening to tie the game as Voronkov took his second penalty of the game for cross checking at the 11:11 mark of the third.

Canada was able to tie the hockey game 70 seconds later when Hayton fired a wrist shot from the right faceoff circle to the top corner of the net over the glove of Miftakhov for his sixth goal of the tournament.

The game remained tied heading towards the four-minute mark of the third period when the Canadians broke through to take the lead for good.

Addison attempted to move the puck up the ice to McMichael in front of the Russian bench when the Canadian forward re-directed the pass off the boards and into the Russian end. Canadian forward Akil Thomas (Los Angeles Kings) read the play well and managed to chip the puck through the legs of defenseman Daniil Misyul (New Jersey Devils) for a partial breakaway. Miftakhov ended up attempting to poke check the puck off of Thomas' stick, but the Canadian forward tucked the puck to the backhand and put the puck in for his first goal of the tournament.

The Russians attempted to tie the game desperately in the dying minutes of the game, but Hofer turned aside all 14 shots he faced in the period to help secure the gold medal for Canada.

Cozens ended up finishing the tournament for Canada as, arguably, one of the team's top forwards with two goals and seven assists, while also registering 24 shots on goal and a plus-6 rating while averaging 15:38 of total ice time.

As for the Russians, they end up with the silver medal for the 10th time in tournament history and the fourth time in 10 years.

In the bronze medal game, Sweden ended up coming away with their sixth silver medal in tournament history with a 3-2 win over Finland at Ostravar Aréna in Ostrava.

The Finns jumped out to a 2-1 lead through 20 minutes of play thanks to goals from forwards Patrick Puistola (Carolina Hurricanes) and Matias Maccelli (Coyotes).

The Swedes got their opening period goal from defenseman Rasmus Sandin (Toronto Maple Leafs), but ended up snagging the 3-2 lead in the second period.

Just past the halfway point of the period, forward Samuel Fagemo (Kings) tied the hockey game as he cleaned up a Nils Höglander (Vancouver Canucks) rebound to the left of Finnish goalie Justus Annunen (Avalanche). The goal gave Fagemo his tournament best eighth goal, and also upped his point total to a tournament-high 13.

A little less than three minutes later, forward Linus Öberg (2020 NHL Draft) got a bit lucky as he ended up turning with the puck below the red line in the Finnish corner and throwing it towards the net. The puck ended up going off the left foot of Annunen in the crease and re-directing into the back of the net.

Unfortunately for Finland, their medal dreams ended up dying on that goal as they failed to answer Swedish netminder Hugo Alnefelt (Tampa Bay Lightning), who ended up stopping 32 of 34 shots faced, including all 11 shots faced in the third period.

Sabres prospect Erik Portillo ends up earning a bronze medal for Sweden as their third goalie for most of the tournament. The 2019 third round pick ended up dressing for one game for the Swedes, but did not end up getting any playing time.

Fagemo ended up finishing the tournament with the most goals and points in seven games played, but it was Lafrenière who was named as the tournament's Most Valuable Player with four goals and six assists for 10 points in five games.

Here are some of the other honors handed out for the 2020 World Junior Championship:

Best Players (selected by the directorate):

In the relegation round, Germany ended up coming away with a dominant 6-0 win over Kazakhstan in Game 3 of the round. That means that Germany will remain in the Top Division for the 2021 IIHF World Junior Championship in Edmonton and Red Deer, Alberta.

As for Kazakhstan, they have been relegated to Division I-A of the tournament and will be replaced in the Top Division by Austria.

Here is a look at how the groups look for next year's tournament: