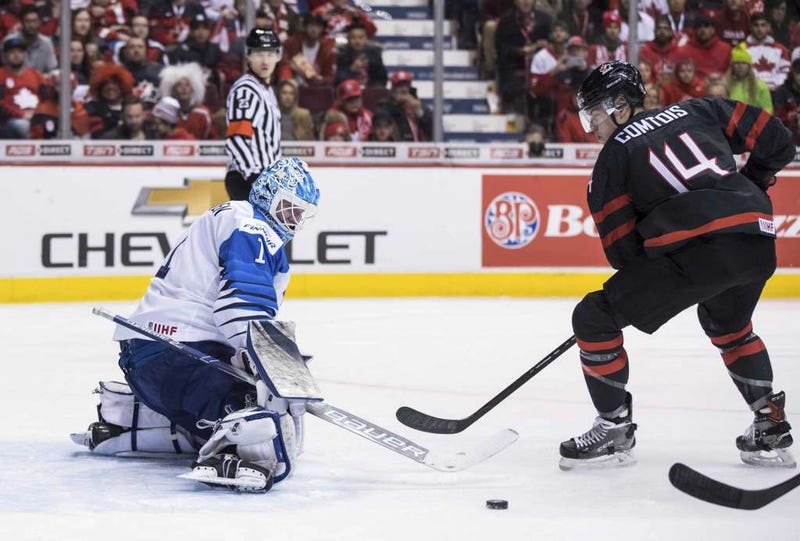 Friday kicks off the semifinal round of the 2019 IIHF Under-20 World Junior Championship after a wild and crazy quarterfinal round on Wednesday in Vancouver and Victoria, British Columbia, Canada.

The Buffalo Sabres have three of their four prospects remaining in the tournament, and they will have a chance to compete for a medal before everything wraps up on Saturday at Rogers Arena in Vancouver. Mattias Samuelsson and the United States kick off the semifinals with a big matchup with Russia, while Ukko-Pekka Luukkonen and Oskari Laaksonen will take on the Cinderella story of the tournament in Switzerland in the final game on Friday.

The United States advanced to the semifinals after a 3-1 win over Matej Pekar and the Czech Republic on Wednesday in Victoria. The United States jumped out to a 2-0 lead in the opening 40 minutes of play, then managed to hold off a late push by the Czechs to earn the right to play for a medal for their fourth consecutive tournament.

The high-powered United States squad has done all they can to score and produce offense, throwing a tournament-high 209 shots on goal and scoring 21 goals. Ryan Poehling (Montreal Canadiens) still leads the tournament in scoring with five goals and eight points, while Jason Robertson (Dallas Stars) sits one point back with one goal and seven points.

However, Team USA will face its toughest test yet as they face an equally high-powered team in the Russians.

Russia advanced to the semifinals after an easy 8-3 win over Slovakia in the quarterfinals on Wednesday. The Russians are currently second in the tournament with 23 goals scored, and lead the field in scoring efficiency with 15.54-percent of their shots going into the back of the net. Leading the way for the Russians is Grigori Denisenko (Florida Panthers), who has scored three goals and picked up seven points in five games played. Alexander Romanov (MTL) leads the tournament in scoring among defensemen with a goal and six assists, but teammate Alexander Alexeyev (Washington Capitals) is right behind with two goals and four helpers for the Russians.

Overall, only one Russian has not produced a point in the tournament, while just two forwards have not scored a goal. Depth has been a benefactor for the Russians on their route to the semifinals.

Russia also has the advantage in net as they have gotten some stellar goaltending with both Pyotr Kochetkov and Daniil Tarasov (Columbus Blue Jackets) in goal. They have combined to put up a .937 save percentage, and have only given up nine goals against in five games played.

The United States has been decent in net with Kyle Keyser (Boston Bruins) and Cayden Primeau (MTL) splitting duties, combining to post a .907 save percentage and 10 goals against.

If there is one goal for both teams in this tournament, it will be to stay out of the penalty box. The Russians are one of the most penalized teams in the tournament, and the United States have been very efficient with the man advantage with a 30-percent conversion rate. However, the Russians provide a lethal power play as well, converting on 31.3-percent of their chances.

Faceoff between the two teams will take place at 4 p.m. EST at Rogers Arena in Vancouver.

The other semifinal will feature two teams that were highly unlikely to meet before the quarterfinals even began.

Finland advanced after upsetting host nation Canada on Wednesday with a 2-1 overtime win in Vancouver. Canada took a 1-0 lead in the second period, and held onto the one-goal margin into the dying moments of regulation. However, with 46.4 seconds to go, Nashville Predators prospect Eeli Tolvanen put a puck off the leg of Panthers prospect Aleksi Heponiemi from behind the net, and the puck bounced its way past Michael DiPietro (Vancouver Canucks) and in for the game-tying goal.

In overtime, both teams went back-and-forth, exchanging chance after chance until defenseman Toni Utunen (VAN) fired home the game-winning goal to help lift the Finns over the hometown favorites. It will be the first time since 2016 that Canada will not play for a medal at the World Juniors, and it is the first time in the country's 13 times hosting the tournament that they will not win a medal.

Luukkonen has been the difference for Finland throughout the entire tournament, turning aside 109 of 117 shots faced for a .932 save percentage and a 1.98 goals-against average. The 19-year-old netminder was named as Finland's Player of the Game in a 2-1 loss to Sweden to open the tournament, and could have easily been named the Player of the Game for the Finns against Canada. He made a number of big saves against the Canadians, 24 in total, and only gave up the one goal in the second period on a laser that he played very well.

As for Laaksonen, the young right-handed defenseman continues to play some solid hockey on the blue line. The 19-year-old played a total of 21:58 on Wednesday, which was the third highest total among defensemen. He picked up a shot on goal in the win, and was asked to play some more key minutes in this game, including some time on the penalty kill. In five games this tournament, Laaksonen has a goal on nine shots, and has a plus-3 rating while averaging 20:32 of total ice time.

While Finland's upset of Canada was a memorable one, Switzerland pulled off, arguably, one of the biggest upsets in the history of the tournament.

The Swiss came away with a 2-0 win over a heavily-favored Swedish team on Wednesday to open play in the quarterfinals. Yannick Brüschweiler broke a scoreless tie late in the first period as he put up a great individual effort to get the Swiss team out front first. In the second, Switzerland added to the lead with a goal from Luca Wyss at the 13:59 mark to give them some comfort room heading into the second intermission. From there, goalie Luca Hollenstein stopped 19 shots faced in the third period, 41 overall, and pitched the shutout to stun the defending silver medalists.

For Sweden, it will be the first time since the 2006 tournament that they will not play for a medal.

Although Switzerland finished as the fourth place team from Group A, they certainly did not go down without a fight in any of their matchups. That was very evident in Wednesday's win over Sweden as they matched their speed and skill from start to finish. Sweden relied upon their defensive weapons to contribute to an offense that did lack some scoring, but the Swiss did a flawless job of taking them out of the picture for a majority of the night.

The Finns cannot take the Swiss team too lightly, and they will need to put up a better offensive output in this matchup than they have in other games in the tournament.

They will face the tournament's best goalie in Hollenstein, as he has posted a remarkable 0.66 goals-against average and a .978 save percentage in three games played. He has faced an average of 29 shots per-game, and has only allowed a total of two goals.

Finland also has to find more ways to get the puck in the back of the net as they have only scored 14 goals on 184 shots. That's just a 7.61-percent scoring rate, which is currently eighth among the 10 teams in the tournament. And while Switzerland has only put up 136 shots on goal, they have made their shots count with 13 goals for a 9.56-percent scoring rate.

Faceoff from Vancouver for this semifinal game is set for 8 p.m. EST.