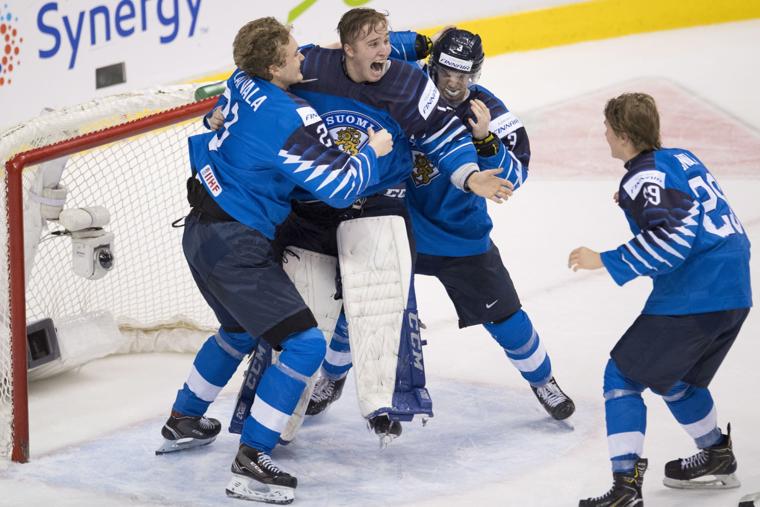 For the third time in six years, Finland captures gold at the IIHF Under-20 World Junior Championship.

The Finns wrapped up the 2019 IIHF World Junior Championship on Saturday, stunning the United States with a late 3-2 win at Rogers Arena in Vancouver, British Columbia, Canada.

After a scoreless 20 minutes of play, Finland struck first with a power play tally from Montreal Canadiens prospect Jesse Ylönen. After a faceoff win in the U.S. zone with 8:29 to go in the period, Buffalo Sabres prospect Oskari Laaksonen dished a quick pass to Ylönen, who fired a one-time slapshot past the glove of goalie Cayden Primeau (MTL). The goal was Ylönen's third goal of the tournament.

The scored remained 1-0 into the third period until Finland upped its lead to 2-0. At the 6:00 mark of the third, defenseman Otto Latvala fired a wrist shot that found its way through a screen and in past Primeau for the two-goal advantage.

However, instead of stepping on the Americans' throats to put them out of reach in third, the Finns sat back and let the U.S. come at them with the lead. Team USA made them pay immediately.

Just 1:01 after Finland grabbed the 2-0 lead, the U.S. cut the lead to one as Alexander Chmelevski (San Jose Sharks) cashed in on a rebound chance to the right of Sabres prospect Ukko-Pekka Luukkonen. Luukkonen made the original stop on a shot from Jack Hughes (2019 NHL Draft eligible), but could not get over in time to make the save on Chmelevski. Then, just 1:47 later, The U.S. tied the hockey game as Josh Norris (Ottawa Senators) one-timed a shot past Luukkonen off a perfect feed from Chmelevski. This time, Luukkonen got over and nearly snagged the shot down, but the puck went just under his arm on the glove side.

Following the game-tying goal, the United States kept up the pressure and peppered Luukkonen with chance after chance. However, the 19-year-old netminder was up to the task and kept everything in front of him,

With time running out in the third period and with overtime nearing, the Finns started to press and maintained some offensive zone time in the U.S. end. At the 18:34 mark of the third, Chicago Blackhawks defensive prospect Henri Jokiharju threw the puck to the net, and the puck started to bounce around in front of Primeau in goal. Finally, the puck came to the side of the net where forward Kaapo Kakko (2019 NHL Draft eligible) collected it and backhanded the puck over Primeau and in for the go-ahead goal.

The Americans tried desperately to tie the hockey game with time running our, but Finland went into shutdown mode and gave the U.S. nothing to work with.

For the Finns, they capture their first gold medal since the 2016 tournament when they hosted the event in Helsinki. As for the United States, they come away with their second silver medal in program history and the first since 1997. The loss also snaps a four-game winning streak for the Americans in gold medal games.

Luukkonen was a difference maker for Finland yet again, stopping 26 of 28 shots faced in the win. The 6' 5" and 209-pound goalie finished the 2019 tournament with a 5-1-0 record, a 1.80 goals-against average and a .932 save percentage. Luukkonen was also named as a Media All-Star at goaltender for his performance in this tournament.

Compared to last year's World Junior Championship in Buffalo, Luukkonen looked like a completely different goaltender. He looked much more clean with his movements in the goal, looked positionally stable, and also looked much more comfortable in net throughout the tournament. Last year, Luukkonen ended the tournament with a 3.13 goals-against average and an .879 save percentage in five games started for the Finns.

As for Laaksonen, he played another decent game for the Finns on Saturday, picking up an assist, two shots on goal, a penalty and a minus-1 rating in 19:54 of ice time. In seven games played for the tournament, Laaksonen finished with a goal and an assist, 11 shots, and a plus-5 rating while averaging 20:45 of total ice time.

On the U.S. squad, Mattias Samuelsson finished his 2019 World Juniors on a positive note with a solid defensive performance against Finland. He played 14:03 of action and registered a shot on goal in the loss, and finished the tournament pointless with a plus-3 rating and 10 shots on goal. The 18-year-old defenseman also averaged 16:42 of ice time in seven games played.

The bronze medal went to Russia on Sunday as they defeated Switzerland earlier in the day by a 5-2 score. Russian forward Kirill Slepets capped of the tournament with a hat-trick in the win, while captain Klim Kostin (St. Louis Blues) and Nikita Shashkov also scored a goal. It is Russia's first medal since the 2017 World Juniors when they upended Sweden for the bronze medal in Montreal, Quebec, Canada.

Here's a look at the honors handed out after the tournament:

BEST PLAYERS (Selected by the directorate):​

On Saturday, Kazakhstan defeated Denmark in the second game of the relegation round to qualify for the 2020 IIHF World Junior Championship in Ostrava and Třinec, Czech Republic. Denmark has been relegated to Division IA of the tournament, while Germany will return to the top division.

Here is how the groups will look for the 2020 World Juniors: