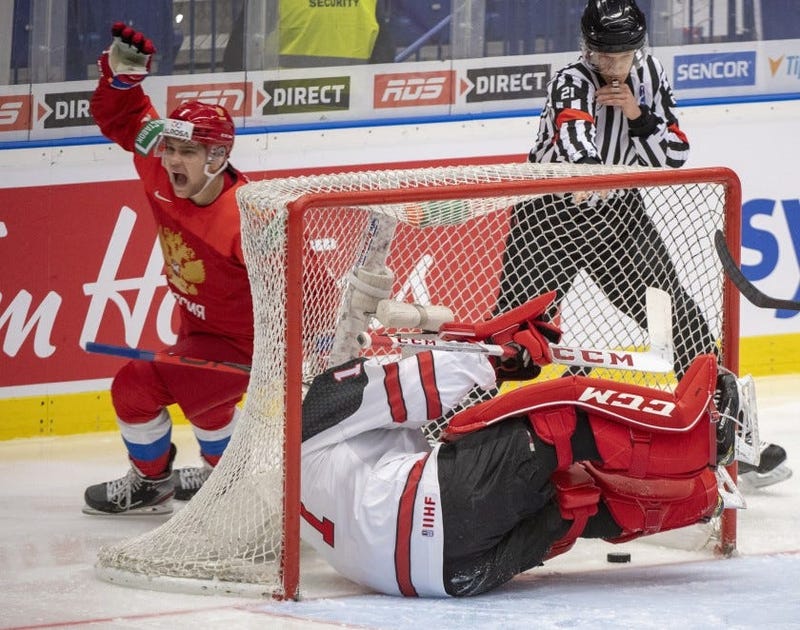 Day 3 of the 2020 IIHF World Junior Championship in the Czech Republic was filled with parity as a pair games in Group B action has changed the complexion of the entire group.

The opening game of the day in Ostrava featured the host Czechs looking to get their second win of the tournament as they faced Germany. However, it was the Germans who pulled off the second upset of the tournament with a 4-3 win for their first win in preliminary play of the Top Division since the 2014 IIHF World Junior Championship in Sweden.

It only took nine seconds for the Germans to get their first power play chance of the game as Buffalo Sabres prospect Matej Pekar tripped up defenseman Moritz Seider (Detroit Red Wings) off the opening faceoff.

Just 1:32 later, Germany took the early 1-0 lead as Lukas Reichel (2020 NHL Draft) took the puck to the net from the corner, and eventually jammed the puck past the left leg of Czech goalie Lukas Dostal (Anaheim Ducks) and just over the goal line.

Nearly six minutes later, the Germans upped their lead to 2-0 as John-Jason Peterka (2020 NHL Draft) went to work in the Czech zone, eventually setting himself up for a chance with space in the slot. Peterka found some open space to take a pass from Tim Stützle (2020 NHL Draft), and he was able to skate in on Dostal and fire a shot over the right blocker side.

The home Czech crowd was silenced for a majority of the first period until the Germans opened the door for the Czechs.

With 4:04 to go in the period, Peterka put his team in a bind as he took a checking from behind penalty that saw him get a two-minute penalty and a 10-minute misconduct. That Czechs took advantage of the man advantage as defenseman Martin Hugo Has (Washington Capitals) walked in to the top of the faceoff circle and fired a wrist shot past the blocker of goalie Hendrik Hane just 45 seconds into the power play.

On the play, Pekar picked up the primary assist for the Czechs as he came up with the puck out of a scrum in the German corner and fed it back to Has at the point. It was the first point of the tournament picked up by the Sabres prospect.

The second period featured more penalty trouble for both teams, especially the Czechs, who found themselves down by two men at the 12:09 mark of the middle frame. With 18 seconds remaining in the two-man advantage, German forward Dominik Bokk (Carolina Hurricanes) wired a one-time shot from the bottom of the faceoff circle that just got by the right leg of Dostal and in to give Germany the 3-1 advantage.

The penalty troubles carried over into the third period for both teams, and the Czechs eventually found themselves down 4-1 with 12:27 remaining in regulation. With Czech forward Ondrej Pavel in the box for holding, Bokk scored his second goal of the game as he skated through the Czech defense and got enough of a shot off to float the puck past the glove hand of Dostal and in.

Despite being down 4-1, the Czechs did not quit as the scored two goals to make things interesting heading into the final moments of the contest.

Forward Jan Jenik (Arizona Coyotes) closed the gap to 4-2 just 1:46 later as he skated into the German zone and had his shot go off a German stick and flutter its way over the glove of Hane and in.

Moments later, the Germans found themselves in more penalty trouble and gave the Czechs a two-man power play advantage. With one second to spare, Czech captain Libor Zabransky wired a one-time slap shot past the glove of Hane to make it a 4-3 game with 7:30 remaining in the game.

The Czechs continued to up the pressure on the Germans as they attempted to tie the hockey game, but Hane shut the door the rest of the way to help Germany clinch the much-needed win.

Pekar ended the game with his one assist in the first period, as well as a shot on goal, a minus-1 rating and four minutes in penalties in just 6:37 of total ice time. He ended up only playing one shift in the third period that lasted 11 seconds.

In the second game of the day in Group B, Canada looked to take firm control of the group with a win over the Russian, who had lost to the Czech Republic two days earlier.

However, this contest belonged to Russia from start to finish as they dominated the Canadians with a 6-0 shutout win.

The Russians jumped on the Canadians from the get-go, and ended up taking the 1-0 lead just 1:44 into the game with a fluky goal from forward Alexander Khovanov (Minnesota Wild). Khovanov made a nice play to steal a breakout pass at the Canadian blue line, and eventually got a shot off that was stopped by the blocker of goalie Nico Daws (2020 NHL Draft). However, the puck ended up coming down in the goal crease and just over the goal line after Daws could not locate the rebound and fell down after losing his balance going backwards.

Exactly 9:30 later, the Russians took a 2-0 lead when forward Pavel Dorofeyev (Vegas Golden Knights) found himself with the puck alone in front of the Canadian net and made a move to the backhand to beat Daws over the right leg.

Russia tacked on one more goal before the end of the period as forward Nikita Rtishchev converted on a Daniil Pylenkov rebound in front of the net, sliding a backhander through the five-hole of Daws coming across to try and make the save.

The shots in the opening period were 17-9 in favor of the Russians, but Canada had a chance to get on the scoreboard to start the second period with a late penalty taken by forward Dmitri Voronkov (Columbus Blue Jackets).

Canada got some pressure early on the power play in the second period, but failed to find the back of the net to change the tide. To make matters worse, the Canadians ended up losing their top scorer during that man advantage to injury as forward Alexis Lafrenière (2020 NHL Draft) went to the net and ended up hurting his left knee after a collision with goalie Amir Miftakhov.

Alexis Lafrenière goes down after a scary collision with the Russian goaltender. pic.twitter.com/S5hLEHdk9P

Moments later, the Russians rubbed some dirt in the fresh Canadian wound as forward Nikita Alexandrov (St. Louis Blues) snuck his way around the Canadian defense and tucked the puck around the right leg of Daws to up the lead to 4-0.

That goal-against signaled the end of the game for Daws, who was pulled after giving up four goals on 18 shots faced. Canada then turned to backup netminder Joel Hofer (Blues), who continued to face the full front of Russia's pressure as the game continued.

Russia added two more goals in the second period to make it a 6-0 score as forwards Yegor Sokolov (2020 NHL Draft) and Grigori Denisenko (Florida Panthers) found ways to get pucks behind Hofer to put the game out of reach heading into the third period.

The Russians ended up outshooting the Canadians 40-28 in the win, and stunned everyone at the tournament following their loss to the Czechs just two days before.

Sabres prospect Dylan Cozens did what he could to help Canada stick with the Russians in the loss, registering three shots on goal and winning 55.56% of his faceoffs in 14:02 of total ice-time.

Over in Group A action in Třinec, the day started with Finland completely dominating Slovakia by an 8-1 score. It was the Räty brothers, Aku (Coyotes) and Aatu (2020 NHL Draft), that helped carry the Finns to their first victory of the tournament as they combined for three goals and an assist on the team's fourth line.

In the second game of the day in Group A, it was Sweden dominating Switzerland early in a 5-2 win. Sweden forward Nils Höglander (Vancouver Canucks) continues to be a factor offensively, scoring another goal and picking up a nice assist in the first period en route to the Swedes' second win of the tournament. Los Angeles Kings prospect Samuel Fagemo ended up scoring two goals for the Swedes and was named as the Player of the Game for Sweden.

The win for Sweden also ups their unbeaten streak in preliminary round action to 50 games. It's a streak that dates back to the start of the 2008 IIHF World Junior Championship, which was also held in the Czech Republic.

Sabres prospect Erik Portillo was once again listed as Sweden's third goaltender and did not dress for the game.

Sunday's action in the Czech Republic gets started with Finland taking on Kazakhstan in Group A action at 9 a.m. EST, while Mattias Samuelsson and the United States take on the Russians in Group B action at 1 p.m. EST.

Both games can be seen on NHL Network.