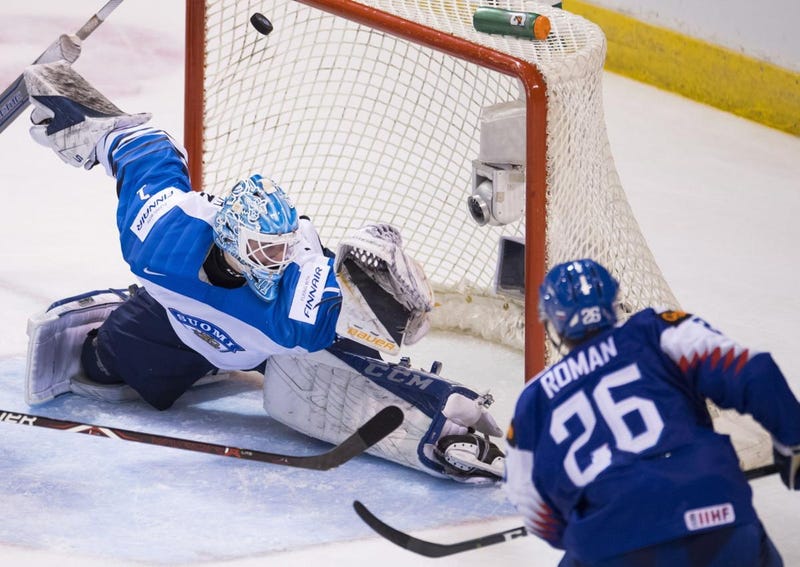 The preliminary round of the 2019 IIHF Under-20 World Junior Championship has wrapped up in Vancouver and Victoria, British Columbia, Canada.

The Buffalo Sabres will have all four of their prospects playing in the tournament taking part in the quarterfinal round, which gets underway on Wednesday.

First, it will be goalie Ukko-Pekka Luukkonen and defenseman Oskari Laaksonen for Finland facing the host nation Canada at 6:30 p.m. at Rogers Arena in Vancouver.

In three games played in this tournament, Luukkonen has a 1-2-0 record with a 2.36 goals-against average and a .924 save percentage. He was definitely Finland's best player in their tournament opener, making some stellar saves against a fast-paced Swedish group that tested him from the start of the game. The 19-year-old netminder was the reason that his team was able to stick with the Swedes through a majority of the contest.

After another solid 22-save performance against Slovakia on Saturday, Luukkonen struggled a bit against the Americans on Monday night in a 4-1 loss to close out group play. The U.S. tested Luukkonen early in the game, and he was certainly up to the task. However, the young netminder would go on to let in three goals that his team could have used a save on. While the team in front of Luukkonen made mistake after mistake, they needed him to make the key saves to keep the U.S. off the scoreboard, especially in a short tournament such as this one.

Luukkonen is expected to return to the crease on Wednesday night as they try to upset the Canadians, who have won all but one game in this tournament.

Laaksonen has been very solid for the Finns throughout the four games played to this point. The 19-year-old has one goal and a plus-3 rating in the tournament, while playing a top-four defensive role on this Finnish squad. He has been averaging 20:11 of ice time per-night with the Finns, and has been solid in both ends of the ice, especially in their transitional game. He scored his lone goal of the tournament in the team's 5-1 win over Slovakia when he came off the bench and let go of a one-timer from the top of the faceoff circle to score on the high blocker side.

As for Canada, the host nation has looked very fast throughout the entire tournament, and they have certainly put a lot of rubber in the back of the net. They lost their only game of the tournament to Russia on Monday, but have managed to still out-score their opponents 23-5. That included a 14-0 drubbing of Denmark in the team's first game of the tournament last Wednesday, in which Morgan Frost (Philadelphia Flyers) had a three-goal night and Maxime Comtois (Anaheim Ducks) picked up four goals for the Canadians.

If Finland were to upset the hometown favorites, they will need Luukkonen to come ready to play again, while also having their top offensive threats putting the puck in the net. Finland is currently eighth in goals per-game in the tournament, with players like Eeli Tolvanen (Nashville Predators) and Rasmus Kupari (Los Angeles Kings) going scoreless thus far.

Later on Monday, it will be defenseman Mattias Samuelsson and the United States taking on forward Matej Pekar and the Czech Republic at 8 p.m. at the Save-On-Foods Memorial Centre in Victoria.

Samuelsson has primarily spent his time playing on the Americans' third defensive pairing in a shutdown role, but that's not to say he has solely been just playing as a defensive defender. The 18-year-old has yet to register a point in four games played, but does have a plus-2 rating in 16:24 of average ice time.

Team USA finished group play of the 2019 World Juniors with a 3-0-1-0 record, with the only loss coming in a 5-4 thrilling overtime loss to Sweden on Saturday night. The Americans are currently sixth in goals per-game in the tournament, but they do boast the best power play and penalty kill units in the tournament. The U.S. also has the tournament's leading scorer with Ryan Poehling, who has five goals and eight points in four games. The 19-year-old first round pick of the Montreal Canadiens in 2017 scored three of his five goals in the comeback effort against Sweden. He scored a natural hat-trick in the third period to tie the hockey game, with all three of those goals coming in a 6:11 span. His goal with just 23.4 seconds to go in regulation tied the game at 4-4, this after Team USA had trailed to Swedes 4-0 with 17:26 to go in the third period.

As for Pekar, he has played prominently in a fourth line role for the Czech Republic, but his role has fluctuated as the games went on in the preliminary round. The 18-year-old has gone pointless in his four games played and hasa minus-1 rating, but his ice time has steadily increased and has averaged out to 10:31 per-game. In the Czech's preliminary finale against Denmark, Pekar saw himself playing alongside Carolina Hurricanes 2017 first round pick Martin Necas on the team's second line to start the game.

Overall, the Czechs have had a tough tournament playing in the same group as Russia and Canada. They managed to play both the Russians and Canadians tough in group play, and went 1-1-0-2 with a regulation win over Denmark and an overtime win over Switzerland. While their record may show that they struggled in group play, they certainly are a team that could bring fits to this American squad. They have the offensive pieces to test the U.S., and they can play physical enough to slow down a high-paced American attack.

However, if the Czechs want to upset the United States, they, like the Finns, will need some more scoring from their top offensive weapons.

The quarterfinal round gets underway on Wednesday with Sweden taking on Switzerland at 4 p.m. at the Save-On-Foods Memorial Centre. Sweden finished the tournament as the top team in Group B with a 3-1-0-0 record. The winner of this matchup will face the winner of the Canada-Finland matchup on Friday.

Rounding out the quarterfinals is a matchup between Russia and Slovakia at Rogers Arena at 10:30 p.m. Russia finished the preliminary round as the only perfect team of the tournament with a 4-0-0-0 record. They managed to upset the Canadians on New Year's Eve with a 2-1 win over the host nation in Vancouver. The winner of this matchup will go on to face the winner of the U.S.-Czech Republic in the semifinals.

In the relegation round, Denmark and Kazakhstan will face off for the right to remain in the tournament's top division for the 2020 World Junior Championship in the Czech Republic. Denmark went through group play without scoring a single goal while playing in Group A with Russia, Switzerland, Canada and the Czech Republic. Kazakhstan was the popular pick to be relegated to Division IA, but they managed to put up some convincing performances in all four games in Group B.

The loser of the relegation round will be replaced by Germany for the 2020 tournament.