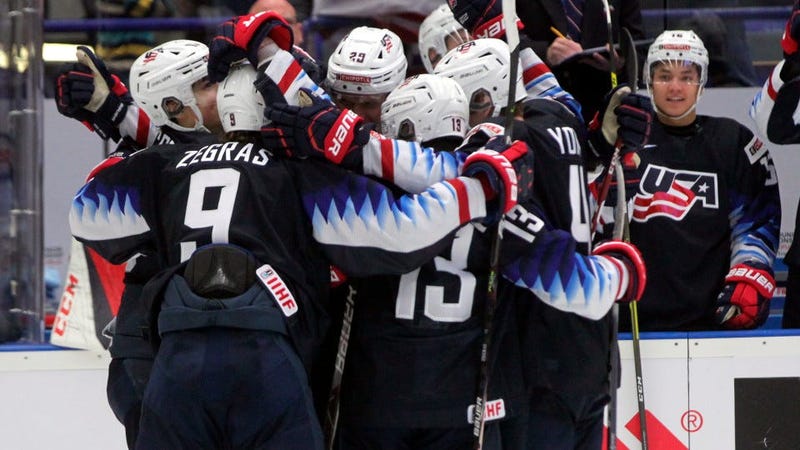 The United States grabbed its second win of the 2020 IIHF World Junior Championship on Sunday with a 3-1 win over Russia in Ostrava, Czech Republic.

The win for the Americans gives them their fifth consecutive win over the Russians at this tournament, which dates back to the 2017 IIHF World Junior Championship in Montréal.

After a scoreless opening 35 minutes of this game, the U.S. were given a chance to score the game's opening goal with a power play after Russian forward Ilya Kruglov was penalized for tripping. A little more than a minute into the man advantage, forward Trevor Zegras (Anaheim Ducks) worked his magic again as he found forward Arthur Kaliyev (Los Angeles Kings) for a one-time feed that was wired past goalie Amir Miftakhov for the 1-0 lead.

It took just six seconds later for the U.S. to take a 2-0 lead as off the faceoff, the Americans had a set play that eventually developed into a quick 2-on-1 rush. U.S. forward Oliver Wahlstrom (New York Islanders) was able to get around a Russian defenseman while forward Nick Robertson (Toronto Maple Leafs) skated into position to get a shot off. Although he did not get enough on the shot, Robertson's attempt was able to slowly bounce and trickle its way into the net.

The U.S. quickly upped its lead to 3-0 at the start of the third period as Kaliyev scored his second goal of the game. While working one-on-one with a Russian defender into the offensive zone, Kaliyev decided to throw the puck in on Miftakhov and it found its way through the Russian netminder and just over the goal line.

That goal against signaled the end of the game for Miftakhov, who was pulled after giving up three goals on 15 shots faced. That brought in Yaroslav Askarov (2020 NHL Draft), who ended up stopping all six shots he faced for the remainder of the contest.

Russia did answer quickly to the Americans' third goal as defenseman Alexander Romanov (Montréal Canadiens) found the back of the net past goalie Spencer Knight (Florida Panthers) with a one-time slap shot from the point.

However, Knight shut the door on any Russian comeback by stopping eight of nine shots in the third period en route to his first win of the tournament.

Sabres prospect Mattias Samuelsson was held off the scoresheet again for the Americans, but he played his best game of the tournament to this point with his physical play and his defensive effort. The 19-year-old led all American defenseman with 19:36 of time on ice, and he also picked up two shots on goal and a plus-two rating.

In the lone game of Group A action in Třinec, Finland was able to down Kazakhstan with a dominant 7-1 win.

After Kazakhstan tied the hockey game at 1-1 half way through the opening period, Finland responded with six unanswered goals to take firm control of the contest.

Finnish forward Patrick Puistola (Carolina Hurricanes) was the team's Player of the Game as he scored two goals and added an assist to up his tournament point total to seven.

The tournament continues on Monday with four games in action, starting with Group A action between Sweden and Kazakhstan at 9 a.m. EST. Then at 1 p.m. EST, Switzerland will look to earn its second win of the tournament as they take on Slovakia.

In Group B action, Canada will look to rebound from a 6-0 loss to Russia as they take on Germany at 9 a.m. EST. That will be followed by Team USA closing out its preliminary round play with a matchup against the Czech Republic at 1 p.m. EST.