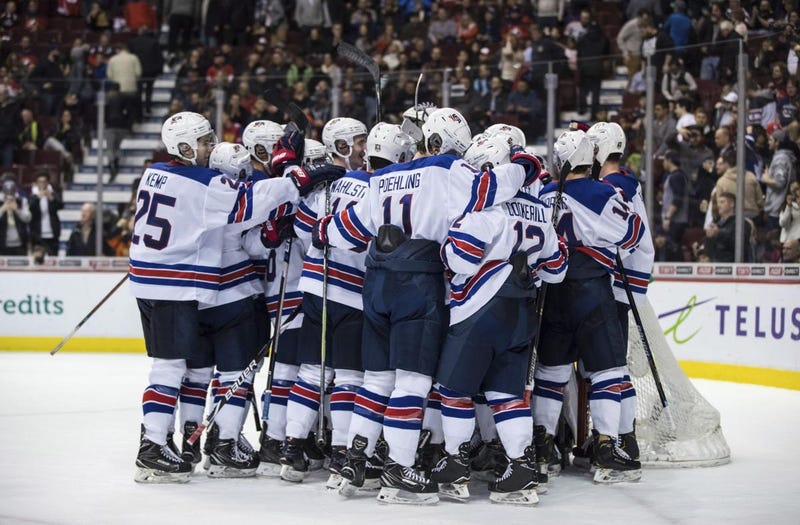 For the second time in three years, the United States will play for the gold medal at the IIHF Under-20 World Junior Championship.

On Saturday night, USA Hockey will go for the program's fifth ever gold medal as they get set to face Finland in the final game of the 2019 World Juniors in Vancouver, British Columbia, Canada.

The U.S. got to the gold medal game courtesy of a 2-1 win over the Russians on Friday afternoon in the semifinal round at Rogers Arena.

The Americans got the scoring started when Oliver Wahlstrom (New York Islanders) finished off a nice pass from Logan Cockerill (NYI) on an offensive rush nearly 14 and a half minutes into the opening period. Cockerill started the play by beating the Russian defenders to the outside, then dropped a pass back to Wahlstrom, streaking in to the left of the goal and the U.S. got out to the first lead of the game.

In the second period, the Russians found themselves in penalty trouble and the Americans took advantage. At the 4:20 mark, Alexander Chmelevski (San Jose Sharks) put home a feed from Jack Hughes (2019 draft eligible) in front of the Russian net to give Team USA the 2-1 lead.

Russia cut the deficit to one just over nine minutes later as Grigori Denisenko (Florida Panthers) streaked to the outside on a 3-on-2 rush and fired a high shot, short-side over the shoulder of Cayden Primeau (Montreal Canadiens) for his fourth goal of the tournament.

From there, the Russians generated a ton of quality offensive chances but could not get the puck into the U.S. net. Vitali Kravtsov (New York Rangers) had a chance to tie the game late in the second period with Primeau out of the net, but his shot was deflected out of play off the stick of defenseman Dylan Samberg (Winnipeg Jets). Early in the third, with the U.S. on the penalty kill, a shot by Klim Kostin (St. Louis Blues) just squeaked through Primeau, but defenseman Phil Kemp (Edmonton Oilers) kept it out as he got his stick in and swept it out of the crease.

In the final couple of minutes of regulation, with the goalie pulled for the extra attacker, the Russians failed to press hard enough and only generated one more quality scoring chance at an attempt to tie the game. Vasili Podkolzin (2019 draft eligible) managed to use his speed to beat the defender to the outside, but his attempt was thwarted by Primeau as he was falling to the ice on his way to the net. Russia ended up out-shooting the U.S. by a 35-27 total, 15-7 in the third period, but it was not enough to come back and steal a victory.

The Americans advance to the gold medal game for the fifth time in program history at the World Juniors, and Team USA has won their last four times in the championship game. Their only silver medal came in the 1997 World Juniors when they lost to Canada while playing in Switzerland.

Buffalo Sabres prospect Mattias Samuelsson had a decent defensive game for the United States, shutting down a couple of offensive rushes from the Russians to preserve their lead. He finished the night playing in 17:25 of ice time but registering nothing on the scoresheet.

With the United States winning the first semifinal game, they awaited the winner of the second semifinal game between Finland and Switzerland.

The game ended up being a blowout for the Finns as they cruised to a 6-1 win over the Swiss to advance to the gold medal game. It will be the second time in four years that Finland will play for gold, and it will be their fourth attempt at winning it all at the IIHF World Juniors.

Finland scored early and often on the Swiss as they put the game away early in Vancouver. Jesse Ylönen (MTL) opened the scoring just 40-seconds into the contest as he ripped a shot off the far-side post and in past goalie Luca Hollenstein. Just 2:15 later, it was Finnish captain Aarne Talvitie (New Jersey Devils) finishing off a nice rush with a wrist shot the beat Hollenstein off the post and in to make the score 2-0. Nearly three minutes later, it was Talvitie scoring again as he scored off a Rasmus Kupari (Los Angeles Kings) rebound in front of the net to extend the lead to 3-0. The night would end for Hollenstein at the 7:43 mark of the first when Henri Jokiharju (Chicago Blackhawks) fired a wrist shot from the point on the power play that found its way through a screen.

Switzerland managed to get on the board late in the first as Philipp Kurashev (CHI) took the puck to the net himself, and eventually put a shot in from the slot over Ukko-Pekka Luukkonen for his sixth goal of the tournament.

In the second period, Finland added two more goals off the sticks of Aleksi Heponiemi (FLA) and Kupari to make the score 6-1. From there, Finland went into complete shutdown mode as they limited the Swiss to just five shots on goal in the third period to punch their ticket to the gold medal game.

Luukkonen has been one of the stars of the tournament for Finland, and he was very solid in net once again. Although he faced only 17 shots on goal, the 19-year-old Sabres prospect kept most of everything in front of him, limiting rebound chances and playing some sound positional goaltending. The 6' 5" and 209-pound goalie is now 3-2-0 in the tournament with a 1.76 goals-against average and a .933 save percentage.

As for Oskari Laaksonen, he had a quiet night on the scoresheet, but he continues to impress many that watch him in the tournament. The 19-year-old third round pick of the Sabres in the 2017 NHL Draft played in a game-high 22:44 of total ice time and was a plus-3 in the win. The 6' 1" and 165-pound blue liner continues to get the trust of head coach Jussi Ahokas and continues to earn more ice time in every game, getting time on the power play and penalty kill as well.

The U.S. and Finland have already squared off once in this tournament, meeting in the preliminary round in Victoria, British Columbia with the Americans dominating the Finns in a 4-1 win. Faceoff from Rogers Arena in the gold medal game is set for 8 p.m. EST.

Russia and Switzerland will battle it out earlier on Saturday for the bronze medal at 4 p.m. EST.

Both games can be seen on NHL Network.