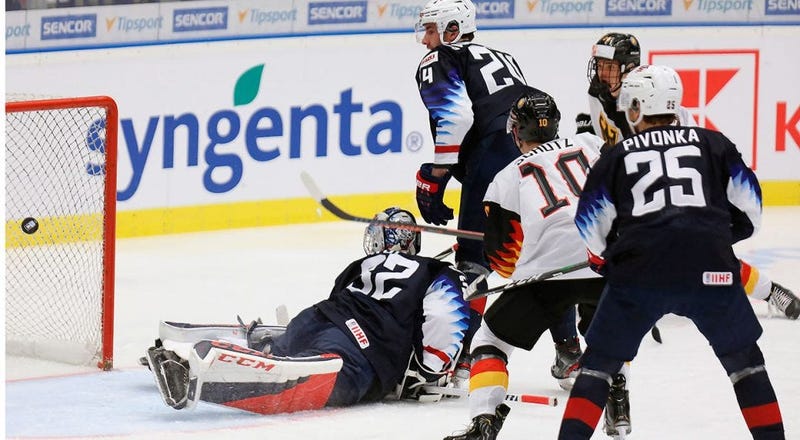 What started off as a nail-biter for the United States ended up being a much-needed 6-3 win over Germany in Day 2 of the 2020 IIHF World Junior Championship in Ostrava, Czech Republic.

After coming off a 6-4 loss to Canada in the opening day of action, the U.S. needed to right the ship with a win over a German team that has not seen action at the Top Division of this tournament since 2015.

However, it was the Germans who struck first as Team USA's penalty kill continued to struggle in the tournament.

After going just 2-for-5 in the loss to Canada, the U.S. found themselves in early penalty trouble with forward Oliver Wahlstrom (New York Islanders) in the penalty box for tripping. It took Germany just 1:06 into the man advantage to score as John-Jason Peterka (2020 NHL Draft) finished off a nice passing play from Tim Stützle (2020 NHL Draft) with a wrist shot over the left glove hand of a sprawled out Dustin Wolf (Calgary Flames) to give Germany the 1-0 lead.

However, Team USA responded with two goals to take the 2-1 lead heading into the first intermission.

A little more than four-and-a-half minutes after Germany took the 1-0 lead, it was U.S defenseman Jordan Harris (Montreal Canadiens) who evened the score with a wrist shot from the high slot that found its way through a screen in front of German goalie Tobias Ancicka.

Then with 1:23 remaining in the opening period, defenseman Zac Jones (New York Rangers) gave the U.S. the lead with a nice one-time slap shot to the top right corner of the German net. The defenseman snuck in from the point to take the shot off a nice back pass from forward Trevor Zegras (Anaheim Ducks).

The Germans were given another power play opportunity early in the second period as Zegras was penalized for high sticking just 1:34 into the middle frame.

Once again, the U.S. penalty kill could not get the job done as Peterka scored his second goal of the game on the man advantage just 1:19 later. After a shot from defenseman Moritz Seider (Detroit Red Wings) went wide of the U.S. net, Peterka was right there to jam the puck in past the left leg of Wolf.

Germany re-gained the lead at the 8:36 mark of the period when the Germans were able to break up an offensive rush by the Americans, and quickly turn it the other way with an odd-man rush. After a Bobby Brink (Philadelphia Flyers) shot was blocked by defenseman Philipp Mass, he quickly banked the puck off the boards to forward Lukas Reichel (2020 NHL Draft), who then got the puck ahead to Justin Schütz (Florida Panthers) for a 2-on-1 chance. Schütz was able to feed a pass to an uncontested Dominik Bokk (Carolina Hurricanes), who fired a wrist shot over the glove of Wolf.

The lead would only last for 5:40, however, as the Americans tied the game at 3-3 with another goal from forward Shane Pinto (Ottawa Senators). Pinto scored his third goal of the tournament off a rebound in front of the German net that was originally let go by Zegras.

With 1:29 remaining in the second, the U.S. re-gained the lead for good as Curtis Hall (Boston Bruins) slotted a shot under the leg of Ancicka to give the Americans a 4-3 lead. The play started with Zegras taking a pass in the German corner and heading behind the net, but then seeing Hall in front for a pass. Zegras then fed a beautiful behind the back pass to Hall for the go-ahead goal.

For Zegras, it was his fourth assist of the game and fifth assist in two games for Team USA.

The Americans then took over in the third period as they were able to net two more goals to gain a comfortable cushion en route to victory.

On a power play chance at the 7:18 mark of the third, Brink put the U.S. up 5-3 after a scramble for the puck in front of the German net resulted in an open-net goal for the American forward to the right of Ancicka.

A little more than three-and-a-half minutes later, Wahlstrom made it a 6-3 game as he took the puck on an offensive rush and skated around Ancicka to tuck it past his left leg.

The U.S. outshot the Germans 10-5 in the third and smothered any comeback chance for Germany and any dreams of an upset in the Czech Republic.

Sabres prospect Mattias Samuelsson was held pointless once again for the Americans as he finished the game with a plus-1 rating and a penalty taken in a team-high 19:17 of total ice-time.

In the only other game of Day 2 in Třinec, Slovakia opened their 2020 World Juniors with a 3-1 win over Kazakhstan.

With the game tied at 1-1 late in the third period, Slovakia got a goal from forward Daniel Vladimir Tkac to the right of goalie Vladislav Nurek to give the Slovaks the 2-1 lead.

Kazakhstan gave it one last effort in the dying moments of the third, but Slovakia put the game on ice with just seven seconds left with an empty net goal from Robert Dzugan.

Saturday will feature another four-game schedule in Třinec and Ostrava, starting with the Germans back in action against the host Czech Republic, along with Finland taking on the Slovaks at 9 a.m. EST. Later in the day, Canada will get back in action against Russia, while Sweden will face off with Switzerland at 1 p.m. EST.