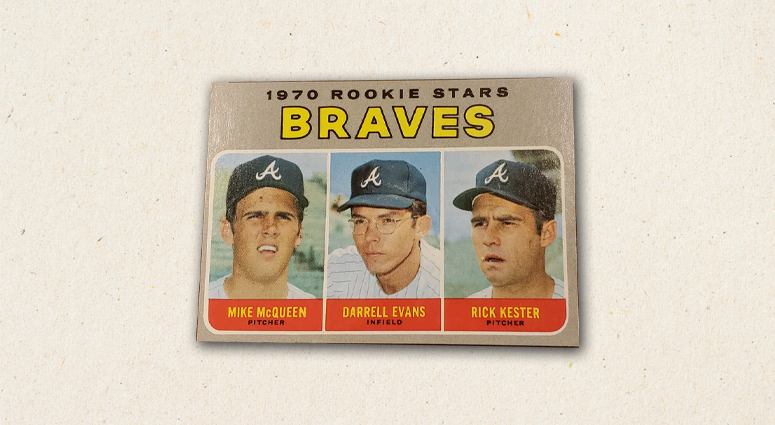 Darrell Evans was a fine player.

The first thing you notice on his Baseball-Reference page is that he was drafted five times -- six if you include the Atlanta Braves "drafting" him from the Oakland A's in the 1968 Rule 5 draft. Not sure what it was about the Chicago Cubs, New York Yankees, Detroit Tigers and Philadelphia Phillies that turned Evans off from signing with any of them, but it's cool trivia.

Evans would go on to hit 414 major league home runs, evenly spread out among three teams: Atlanta (131), San Francisco Giants (142) and -- the team with which I identify him -- Detroit (141). He joined the Tigers in 1984 (a World Series winner), and for most of five seasons was your basic left-handed platoon slugger. Evans hit 40 homers in 1985, and 34 more on another playoff Tigers team in 1987. Evans walked a lot too; he probably was underrated in his day, given how much more value baseball now attributed to on-base percentage. Evans is 12th all-time in walks, right ahead of Stan Musial and Pete Rose. Pretty good!

This is Evans' rookie card, one of those "future stars" cards that were staples in Topps sets for many years. This card is worth a few dollars, although in mint condition it can be worth closer to $100.

Several of the game's all-time greats also made their cardboard debuts this way, sharing their rookie offerings with other guys. Tom Seaver's 1967 Topps rookie is also Bill Denehy's. In 1973, Mike Schmidt debuted with Ron Cey (also a good player) and John Hilton. The aforementioned Rose and Nolan Ryan are also baseball greats, whose rookie cards are shared with other less-famous players. There are many examples.

A friend of mine in collecting likes to say how you can try to trade for one of these cards by asking your buddy for one of the lesser-known players. (e.g., I'll give you "Joe Schmo" for Bill Denehy. Maybe they won't notice Seaver on there.) Just saying here, I do not subscribe to this sort of deception. And if you do that, prepare for your buddy to no longer talk to you.

In Evans' case, those "other guys" are Mike McQueen and Rick Kester. To me, they're what makes this card interesting.

Evans clearly is posing for his picture. The glasses are a good look on him, if you ask me. McQueen (not the STAR 102.5 DJ by the same name, by the way, as I'm sure you were wondering) and Kester though, what is the deal with those expressions?

As they were both pitchers, maybe they were on the mound and looking in for the signs. If so, Kester seems completely befuddled by what the catcher is calling. He seems the definition of "crossed up". McQueen also seems like he can't make something out. Is the sun too bright? Has he just gotten some bad news and is having trouble processing? Can't be sure.

I asked my eight-year-old daughter what she thinks the two players here look like. Her answer: "They seem confused."
Mike Schopp