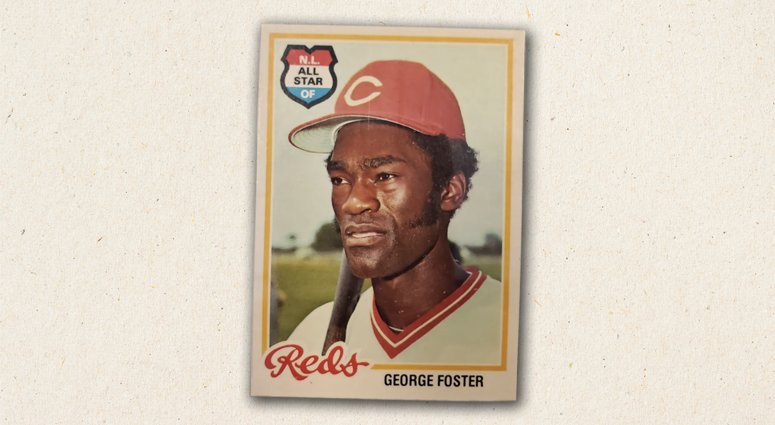 I love this card.

My mom is from outside of Cincinnati, and (with her leadership) by the time I became old enough to care about sports, the Reds were my favorite. It didn't hurt that they were really good -- not the same powerhouse that they'd been in 1975-76, but still good. The Reds were back in the playoffs in '79 before age caught up with their best players.

For a simple head shot, isn't there a lot to like about this Foster card? The sideburns and the eyebrows, the hat and the bat, the V-neck stripes. Then there's the card style. I just love that script Topps (and O-Pee-Chee) used for team names that year, and I also love that All-Star badge. This set isn't particularly renowned for its design or photography, but it's my favorite anyway. I collected these cards when I was six; maybe the first set you collect should be your favorite.

Now yes, this is an O-Pee-Chee card and not Topps. OPC is better known for hockey sets, but they did issue sets parallel to Topps in the 70s, always smaller. The fronts are the same, but the backs are different. The background color is brighter than in the Topps set, and a couple of things on each card are written in English and French. (Foster is an outfielder, or a voltigeur.)

This Foster card is in mint condition, but (for all its virtues) not valuable, running only a couple dollars.
Mike Schopp