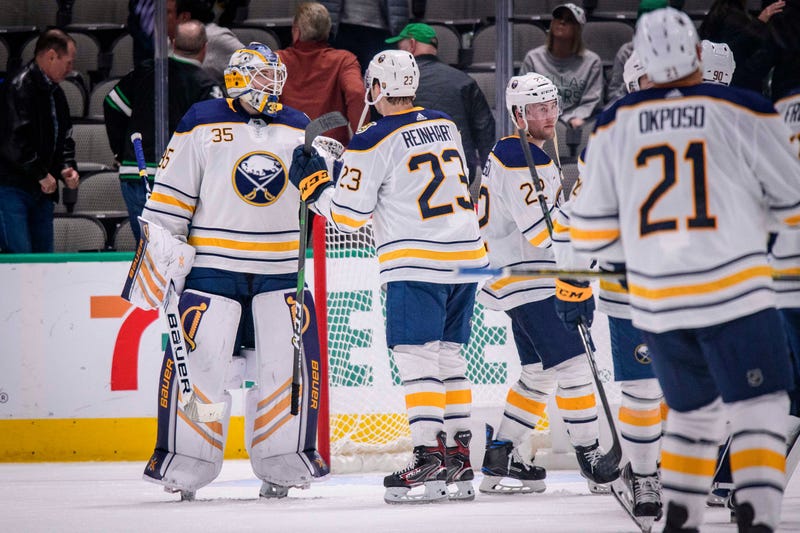 Tyler Seguin had two one-timers for the Stars, but they were from distance.

Buffalo had the better of the chances, and that’s why they left the first 20 minutes up 1-0. Jack Eichel retrieved a puck along the wall and found Sam Reinhart in front. He made a slick no-look backhand pass to Jimmy Vesey, who had a wide-open net. It was an extra special goal for Vesey has he scored his sixth of the season in front of his dad on the Sabres' “Dads Weekend.”

Buffalo had another good chance when Marcus Johansson put a good move on the defense and put Ben Bishop down, leaving him at the post. He went around the net, but put it between Michael Frolik and Conor Sheary with, what would’ve been, an open net goal.

Dallas came out in the second period in, what amounted to, a full court press. They were on the Sabres at every turn, never giving them time to make plays. The Stars had the first eight shots of the period and outshot Buffalo 16-5 in the period.

Ullmark made some big saves, Eichel got back to break up two very dangerous scoring plays from the slot, and through it all, the Sabres still led 2-1.

The boards are very lively in Dallas, and Ullmark couldn’t seem to figure it out. The Stars had set plays off the bouncy walls and tied the game because of it. Ullmark came out to try and glove a point shot by defenseman Miro Heiskanen. He totally overplayed it as the defenseman was trying to miss the net. It worked perfectly as the puck caromed out to captain Jamie Benn.

It happened two more times in the period where the Stars didn’t score, but Ullmark was way up and not protecting against it.

Buffalo survived the period and got its one-goal lead back when Curtis Lazar got in front of Bishop. The goaltender never moved as Rasmus Dahlin scored his third of the season.

Buffalo had a real nice chance early in the third period to take a two-goal lead, but Bishop made his best save of the game, throwing the left pad out to stop Frolik.

Lazar had a nice chance when he took off with Johansson. Lazar broke free down the slot, but Bishop stopped the backhand shot.

Later in the period, Lazar got in quickly on a forecheck and found himself open in the circle. His shot hit the post.

Earlier I talked about the all-out press Dallas employed in the second period. Buffalo actually had the better of the play in the third, as it seemed like the Stars wore themselves out.

Even though Lawrence Pilut was in the penalty box late, the Sabres looked very confident killing off a 6-on-4. As a matter of fact, they were so confident that Lazar got the puck in with Frolik, and the two combined to score the shorthanded empty netter.

Zemgus Girgensons closed out the scoring with another empty netter.

Full marks for the Sabres in this game. They won in a building they hadn’t won in since January of 2009, and they looked like a really confident bunch, winning their fifth game in seven tries.