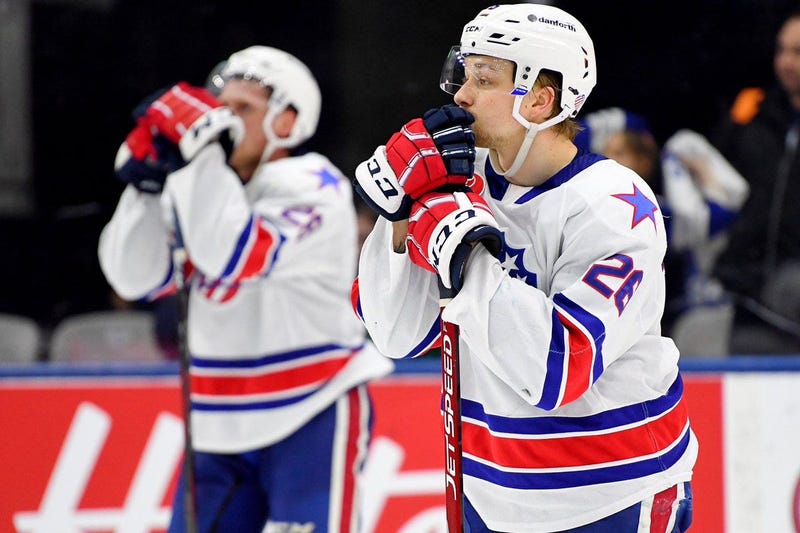 April 25, 2019 04/25/2019 2:55 am
(WGR 550) - Even though the Sabres had a historic collapse that led to Phil Housley getting fired, there was so much promise around the farm team. The Rochester Americans finished with the third best record in the AHL and had young players like Victor Olofsson, Lawrence Pilut and Rasmus Asplund emerge.

All the optimism and promise went away in a big hurry as Toronto finished its three-game sweep of the Amerks with a 3-1 win in Toronto on Wednesday.

Game 3 was a huge disappointment. The Amerks were facing elimination, yet I saw close to no desperation in the first 40 minutes.

Rochester was down 1-0 when Tage Thompson ripped a wrist shot from the top of the circle on a power play to tie it. It took the Marlies 1:59 to take the lead back for good when Asplund just casually tried to get a puck up from below the goal line to a covered Olofsson, allowing Vincent LoVerde to keep a puck in. Olofsson was just as casual trying to get over to block his shot and Adam Brooks tipped the puck past Scott Wedgewood.

In the third period, we finally saw the desperation we saw from Rochester in Game 2, but despite out-shooting Toronto 16-3, they couldn’t push the tying goal past Kasimir Kaskisuo. In the first 40 minutes, the Amerks showed little interest in getting to battles or trying to get the puck back when Toronto was dominating offensive possession.

Kaskisuo is Toronto’s backup goalie, and in three games, he stopped 97 of 101 shots for a .960 save percentage. Rochester spent the series hitting posts and missing open nets.

The good news for the Sabres is Thompson was one of the few players that did come through. In three games, he scored twice and had numerous good chances.

I was looking forward to watching Asplund play, but the pressure of the playoffs got to both him and Olofsson. Asplund made way too many mistakes at both ends of the ice, and showed that he is likely not ready for Buffalo just yet.

Zach Redmond was voted the AHL’s best defenseman thanks to 21 goals and 50 points in the regular season, but he was shut out in the series.

Adam Brooks had a hat-trick in Game 3 and finished the series with four goals. Chris Mueller had three goals and five points in the two games in Rochester, while Jeremy Bracco chipped in with two goals and two assists.

When Toronto needed a play to be made, their best players were there to make them.

There’s no question that Marlies coach Sheldon Keefe is more ready to make the jump to the NHL than Amerks coach Chris Taylor, but there is one stumbling block. If Jason Botterill wants to talk to Keefe, will the Maple Leafs let him?

As for the Sabres, Olofsson and Asplund showed, as of now, they aren’t ready to play in pressure situations, but they both are rookies, so that doesn’t mean they can’t put in a good summer of work and have good training camps. In Olofsson’s case, I would expect him to make the team. In Asplund’s case, it looks to be like his development isn't quite complete.

It was a shame that Alex Nylander wasn’t healthy enough to play. He was non-existent in last year’s playoffs, but with another year under his belt, I would’ve loved to have seen if he could’ve been a difference maker.

Botterill and Randy Sexton put two years into making Rochester better. The goal was to go on a long playoff run and it’s just another failure for them. Now they have to figure out how the league’s third best team went 0-3 in the playoffs.

music
Luke Combs' first look at his wife at their wedding brought more tears than expected
music
Lady Gaga pulls out all the stops and urges us to vote in her most iconic looks
music
RADIO.COM presents ’90s Country’ with Kelly Ford every Sunday night
music
Quarantine Bop: Vin Diesel back with emotional second song, 'Days Are Gone'
news
911 call, video of Wallace shooting to be released day after election, city says
news
Pa. National Guard arrives in Philadelphia amid Wallace unrest