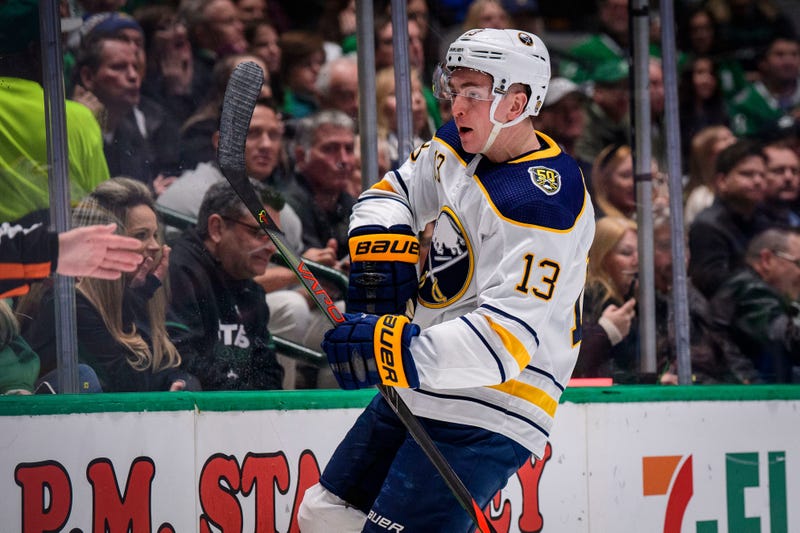 As the Buffalo Sabres resume their 2019-20 season, what is there to pay attention to over the final 33 games?

It certainly doesn’t look like this edition of the Sabres will be able to end the franchise’s record playoff drought, which is currently at eight seasons. They’d have to put a run together similar to what the St. Louis Blues did last season. On Jan. 3, 2019, the Blues were dead last in the NHL standings. They went 30-10-5 the rest of the regular season, earned a playoff berth and ended up winning the Stanley Cup. They picked up 72% of the 90 points that were available over those final 45 games.

As it stands right now, the Sabres would have to grab about 74% of the remaining points in their games to earn a playoff spot, whether that'd be a top-three spot in the Atlantic Division or one of the two Wild Card spots in the Eastern Conference.Don’t hold your breath.

You probably have a better chance at winning the Super Bowl prop bet about current San Francisco 49ers head coach and former Atlanta Falcons offensive coordinator Kyle Shanahan blowing another 28-3 lead in the Super Bowl. You can get 100-1 odds on that one.

Third place in the Atlantic Division is projected at 102 points, while the second wild card spot in the Eastern Conference projects to 100 points. The Sabres are on pace to finish with 85. They’d have to pick up 49 of their remaining 66 points to reach the 100-point mark. If you’d like to see what that looks like in terms of a record, we are talking 22-6-5. For a team that has been as streaky as them, it just doesn’t seem likely.Welcome to the roller coaster ride that has been the Sabres' 2019-20 season. Please keep your hands inside during the ride.

The Sabres opened the season 8-1-1, but followed that up with a 2-8-2 stretch. They bounced back, found their game and proceeded to go 5-1-2, but prosperity didn't last long as they struggled through a 1-6-1 stretch. Whether it is lack of scoring depth, failure of special teams or goaltenders (more Carter Hutton than Linus Ullmark), who aren’t able to make enough clutch saves, the Sabres can't sustain a high level of play or a level good enough to stay in the races.The schedule coming out of the break certainly helps with nine of the next 10 games in the friendlier confines of the KeyBank Center. Buffalo is 14-5-3 at home, which is good, but they are an unsightly 8-14-4 on the road.

This 10-game stretch will also see them play six games against teams below them in the standings (Ottawa Senators, Montreal Canadiens, New York Rangers, Anaheim Ducks and the Detroit Red Wings twice). Only three of their opponents are in the top-10 of the NHL standings and none are higher than seventh. To even think about being back in the playoff race, I think they’d need to get, at least, 16 of the 20 points. If they are going to make a Blues like run, a number of things will need to happen.

Jack Eichel has to keep up his MVP level of play. Eichel has a point in 27 of his last 30 games, and over that stretch has 20 goals and 43 points.

Jeff Skinner has to find the net again. Skinner was goalless in 11 games at the time of his upper-body injury, and has only put up 11 goals this season.

Whenever Victor Olofsson returns from his lower-body injury, he will need to pickup where he left off and resume, what looks like, a Calder Trophy finalist campaign.

You can add Sam Reinhart to the list of keep doing what you’re doing since the Sabres don’t have any consistent scoring up front beyond those four players.It would be nice for the Sabres to play the best six defensemen and try to get some consistent pairings on the blue line. Whether due to injury or strategy, Ralph Krueger has gone with a lineup of seven defensemen a number of times this season. But that means pairs are changing and players can’t get used to each other. Quite honestly, they don’t need to play Zach Bogosian in another game, and I hope they keep Lawrence Pilut up here for the rest of the season and play him on a regular basis. Pilut, Rasmus Dahlin and Henri Jokiharju are the core of that group going forward.Ullmark will have to carry the goaltending duties because Hutton can’t find his game. Hutton has lost his last 11 starts, and when he’s played, the Sabres have more often than not given up four or more goals. I’m sure they won’t play Ullmark every game, but there are only four remaining sets of back-to-back games, so I don’t think he will get much of a break. It’s a pretty tall order, but the Sabres did it back in 2011. That team also had 51 points after 49 games and used a furious surge over the final two plus months to earn a playoff spot.