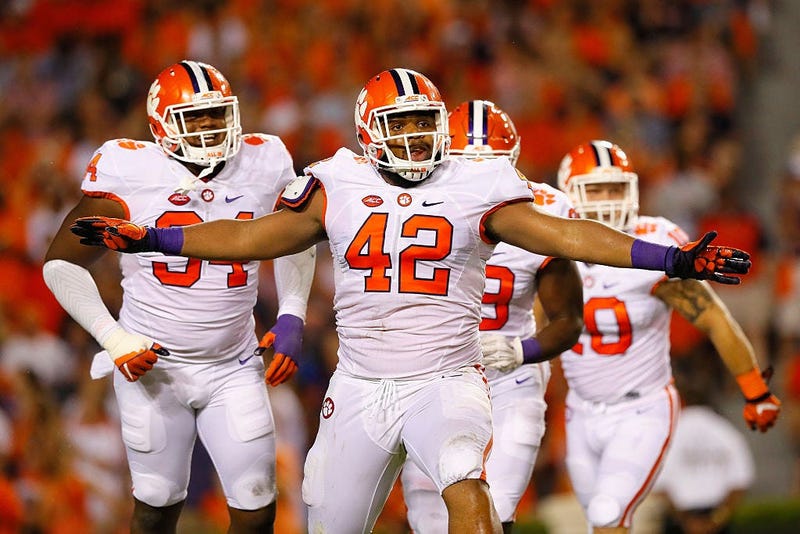 Here is my third and final mock draft with the first round of the 2019 NFL Draft set to get underway on Thursday night:

9.) Buffalo Bills - DL - Christian Wilkins (Clemson)
**NOTE: I think the Bills would prefer to trade down from No. 9 and then take Wilkins later, but I don’t try to project trades in my mock drafts because of how hard it is to determine them. If they stay at No. 9, I still believe Wilkins would be in play and that’s why I still have him here in this mock.**

If you created a profile of the combination of person and football player Sean McDermott and Brandon Beane want in their organization, Christian Wilkins might as well be the poster child for it. By all accounts, his character is impeccable, and he’s the kind of player guys in the locker room gravitate to due to both his leadership and personality. He was named a team captain at Clemson as a junior and won two national titles there. He’s incredibly bright, earning a Master’s degree in Communications Studies in less than four years, as well as the William V. Campbell Trophy, also known as the “Academic Heisman,” given to “the American college football player with the best combination of academics, community service, and on-field performance.” When Wilkins was in high school, his grandfather, who he had lived with, was accidentally shot and killed by an officer in a SWAT raid at his home. Wilkins transferred to Suffield Academy in Connecticut, where he excelled on and off the field. He was a top-25 national recruit and chose Clemson, where he made an impact immediately as a freshman. Wilkins had a stellar college career, finishing with plenty of experience, also something the Bills value. In four years, Wilkins played in 55 collegiate games, including four ACC Championship games, four bowl games, and three National Championship games. He had 192 tackles, including 40.5 for a loss, and 16 sacks. He even batted down 15 passes. At 6’ 3” and 315-pounds, Wilkins is athletic and agile for his size. He can beat offensive linemen off the ball and to a spot, allowing him to make plays in the backfield or get down the line of scrimmage before getting blocked out. He’s not a two-gap anchor and needs to get stronger at the next level to take on double-teams, but since the Bills already have Star Lotulelei doing that, they wouldn’t need Wilkins to have to fill that role. They could allow him to be an attacking, but disciplined three-technique (line up on the outside shoulder of the guard), helping against both the run and pass. To me, Wilkins doesn’t have as high of a ceiling as Ed Oliver, but he also has a higher floor and is a very safe pick who will probably be a solid starter for years.10.) Denver Broncos - QB Drew Lock (Missouri)11.) Cincinnati Bengals - OT - Jawaan Taylor (Florida)12.) Green Bay Packers - TE - Noah Fant (Iowa)13.) Miami Dolphins - QB - Dwayne Haskins (Ohio State)14.) Atlanta Falcons - EDGE - Montez Sweat (Mississippi State)15.) Washington Redskins - WR - D.K. Metcalf (Mississippi)16.) Carolina Panthers - OT - Andre Dillard (Washington State)17.) New York Giants - QB - Daniel Jones (Duke)18.) Minnesota Vikings - OL - Cody Ford (Oklahoma)19.) Tennessee Titans - DT - Jerry Tillery (Notre Dame)20.) Pittsburgh Steelers - CB - Greedy Williams (LSU)21.) Seattle Seahawks - EDGE - Brian Burns (Florida State)22.) Baltimore Ravens - C - Garrett Bradbury (NC State)23.) Houston Texans - OT - Jonah Williams (Alabama)24.) Oakland Raiders - RB - Josh Jacobs (Alabama)25.) Philadelphia Eagles - S - Jonathan Abram (Mississippi State)26.) Indianapolis Colts - S - Chauncey Gardner-Johnson (Florida)27.) Oakland Raiders - EDGE - Clelin Ferrell (Clemson)28.) L.A. Chargers - DT - Jeffery Simmons (Mississippi State)29.) Seattle Seahawks - CB - Rock Ya-Sin (Temple)30.) Green Bay Packers - S - Nasir Adderley (Delaware)31.) Los Angeles Rams - LB - Devin Bush (Michigan)32.) New England Patriots - WR - Marquise Brown (Oklahoma)

40.) Buffalo Bills - EDGE - Chase Winovich (Michigan)
While Rashan Gary seems to get most of the praise and accolades from the Michigan front-seven, it was Winovich who had the production, finishing with 34 tackles for loss and 13.5 sacks his last two years for the Wolverines. He plays with a constant motor and physicality to match it, and can line up with his hand down on the edge or stand up and rush the quarterback. Winovich loves and knows football. He played quarterback and safety and returned punts and kicks in high school. He started out at linebacker at Michigan, then moved to tight end before moving back to the defensive side and playing defensive end. At 256-pounds, Winovoch can have some trouble setting the edge against bigger, longer linemen, but his technique, strength, and understanding of the game usually allows him to make up for that. He also plays a little out of control sometimes, and will have to be a bit more disciplined and patient in the NFL, especially against counters and play-action. He would be a situational player for the Bills his rookie year, but have plenty of opportunity to get on the field as a pass rusher, and hopefully prove he can start at defensive end by his second season.