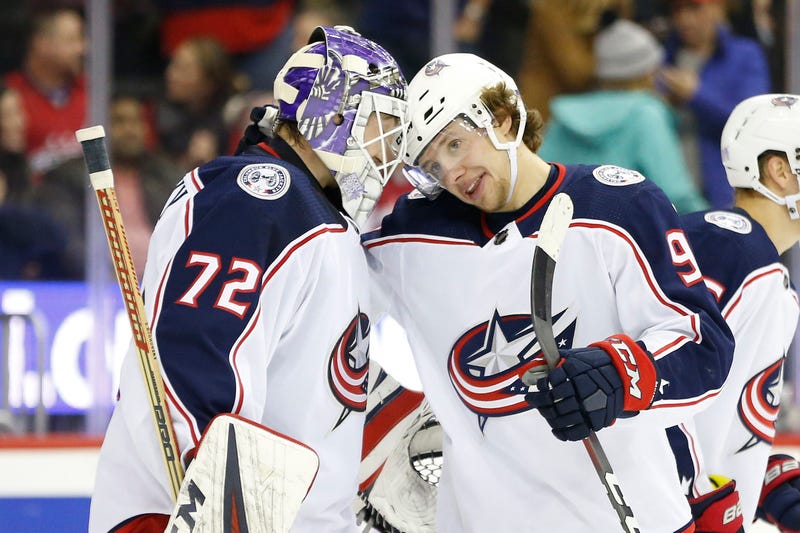 The Columbus Blue Jackets have a bit of a dilemma with the NHL Trade Deadline approaching on Monday at 3 p.m. EST.

While the Blue Jackets are in a playoff spot heading into their last couple of games before the deadline, the team has played some streaky hockey since the turn of the calendar year. In 20 games played since January 1, the Blue Jackets are 10-10-0, but they have played some inconsistent hockey with a couple strings of wins and losses sprinkled in.

With the current situation as it stands in Columbus, the dilemma is whether or not the Blue Jackets should look to try and trade Panarin and/or Bobrovsky before the deadline.

In 56 games played this season, Panarin has been pretty solid for Columbus with 24 goals and 67 points. The 27-year-old winger is on pace to have a career-year in Columbus, on pace for 33 goals, 61 assists and 94 points in 79 games.

Panarin is currently in the final year of a two-year deal that carries an average annual value of $6 million. With the season that Panarin has had on a solid Columbus squad, it is likely that Panarin is going to get a hefty pay raise when he hits free agency.

Before Panarin switched agents mid-season, his former agent Dan Milstein made it clear that the Russian winger would not be signing a contract before the end of the season.

Statement about Artemi Panarin’s future “We have informed the team that we are willing to discuss Artemi’s future after the season. Our priority now is to focus on the rest of the season, trying to win a Stanley Cup for the CBJ & their fans”. No additional comments will be made..

A week-and-a-half later, Panarin made the change in representation to Bobrovsky's agent, Paul Theofanous.

As for Bobrovsky, the 30-year-old netminder has had a bit of an off season for his standards, but the two-time Vezina Trophy winner is still helping Columbus stay in the thick of things heading into the final stretch of the season. In 43 games played this season, Bobrovsky has started in 42 of them with a 24-18-1 record, a 2.89 goals-against average and a .904 save percentage.

However, Bobrovsky has been the focal point of some internal controversy with the Blue Jackets this season. Last month, the Russian netminder was pulled from a game against the Tampa Bay Lightning where we then reportedly had an exchange with head coach John Tortorella before exiting. Two nights later, Bobrovsky was not available for the Blue Jackets' matchup with the Nashville Predators due to, what the team called, an "internal matter". However, the issue was dealt with and Bobrovsky would be in net just one game later.

The future of both players in Columbus seems very murky at this point, which has led to plenty of trade chatter surrounding both players.

To this point, there seems to be more chatter surrounding Panarin with a market for Bobrovsky being relatively limited. However, one team that has been rumored to be interested in both Panarin and Bobrovsky is the Florida Panthers. The Panthers have a dire need for a No. 1 goaltender with the aging Roberto Luongo on the decline and backup goalie James Reimer, at times, unable to carry the workload in place of Luongo. The team is also looking to add another dynamic offensive weapon to add to their group of talent that includes Aleksander Barkov, Vincent Trocheck, Evegnii Dadonov, and company.

If the Panthers are going to make a deal work, it is likely that they would have to make another corresponding move to open up some salary cap space to sign both players to a long-term contract extension. Both players will be unrestricted free agents in the offseason, and the Panthers could wait until the free agency period opens without giving up too many assets, but the idea of having them in house beforehand could be enough to entice them to re-sign for the long-term.

One player that has been reported to be on the market in Florida to, maybe, make these moves a bit easier is winger Jonathan Huberdeau. However, the Panthers have reportedly said that any trade talks surrounding Huberdeau are just "rumors".

For Bobrovsky, there are other teams that could have a need for goaltending help, but it is unclear as to who will really make a push come the trade deadline. A team like the Calgary Flames could be an interesting team with their goaltending situation with David Rittich and Mike Smith.

Panarin is going to continue to garner attention on the trade market for teams looking to make an extended run in the Stanley Cup playoffs. However, a team looking to acquire Panarin would likely use him as a rental piece before he hits free agency this summer. A team like the Boston Bruins have been rumored to be interested in Panarin for rental purposes, as well as the New York Islanders. In Elliotte Friedman's 31 Thoughts blog, he says that a "stealth team" that could swoop in and acquire Panarin's services is the Dallas Stars.

Other teams that could potentially have interest in Panarin includes the Nashville Predators and Los Angeles Kings. The Kings would then be likely to try and get Panarin locked up to a contract extension in the offseason.

We'll have complete coverage of the NHL Trade Deadline next Monday on WGR from 6 a.m. to 7 p.m.

Coverage on the NHL Trade Deadline on WGR is presented by The Ideal You Weight Loss Center.