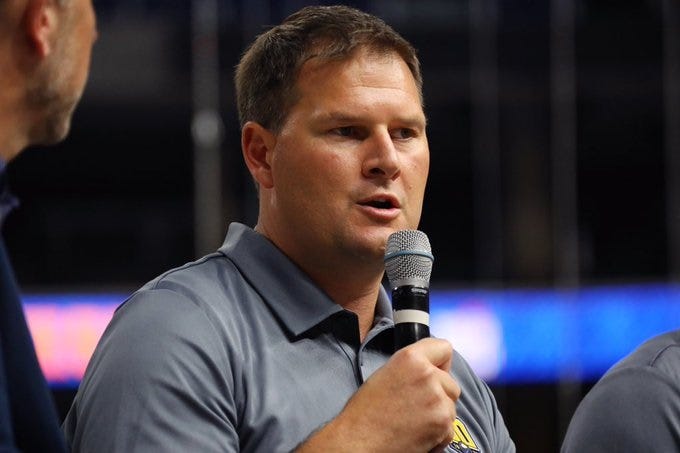 Do you remember "Do something, Darcy"?

We were all younger and Twitter was still pretty new, at least to me anyways, if not the world. The Buffalo Sabres would be meandering through the first few of, what has now grown to, an eight-season long playoff drought, and fans would be begging for, then, general manager Darcy Regier to do something to reverse their fortunes.

Of course, nothing would usually happen and that only increased the outcry. A couple of seasons circled the drain, and then eventually Regier was fired.

Well, I think we’ve definitely reached the "do something" stage with current general manager Jason Botterill.

He’s on his second coach and Ralph Krueger is only just getting started, so let’s not even ponder that being the something to be done.

I’m talking about a trade.

Like many, if not most Sabres fans, I have been awaiting a trade involving a defenseman since, I don’t know, July, maybe? The entire offseason was spent acquiring defenseman, right-handed ones at that, for what surely seemed like an opportunity to flip some of that defenseman depth for help up front.

We all know how that turned out. Months went by with no move and now here we sit.

The Sabres have won only two of their last 10 after a really nice start to the season. Injuries up front are mounting, and one of the prizes of the summer, defenseman Colin Miller, has been a healthy scratch the last two games because they have too many bodies back there. The most recent forward recall, Tage Thompson, suffered, what looked like, a pretty serious arm/shoulder injury on Sunday night in Chicago. And sure, Marcus Johansson and Johan Larsson aren’t thought to be too seriously injured, but this team needs help up front, even with all of those dudes healthy.

If none of those three are ready to play the Minnesota Wild on Tuesday, here’s what Paul Hamilton tells us the Sabres have as options:

“We’ll have to see if Marcus Johansson or Johan Larsson are ready to play. If not, it would have to be J.S. Dea or Andrew Oglevie from Rochester. Krueger could also go with seven defensemen.”

I mean, nothing against Jean-Sebastien Dea or Oglevie, but what? And dressing seven defensemen is not a place I want to visit at this point. Botterill has had months to make a move to really bolster his scoring depth by moving a defenseman.

Take your pick. The Sabres have young-ish guys with term, older veteran rentals and even relatively unproven prospect types. Instead, he sat here with those assets and did nothing as summer turned to fall, and now we’re already shoveling snow.

It’s been eight years without the playoffs. Only the Florida Panthers and Toronto Maple Leafs have gone longer without winning a playoff round, by the way. These seasons are long enough that you can salvage them before too much damage has been done. The Sabres have been going the wrong way here almost since they got back from California, which is close to a month ago.