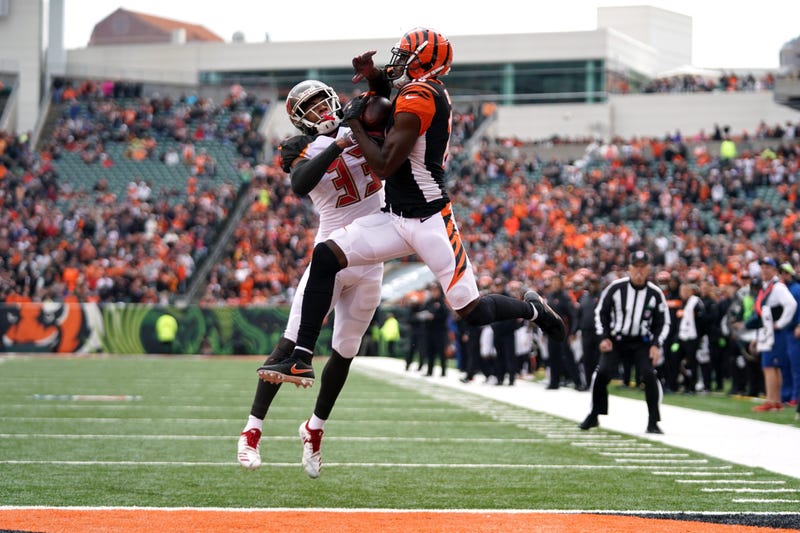 Throughout the first few weeks of the offseason for the Buffalo Bills, you have probably heard a very popular take. What quarterback Josh Allen and the Bills offense needs is a tall weapon on the outside that can go up and make tough catches regardless of the coverage.

A 6-foot-3-plus target with a large catch radius for an often inaccurate signal-caller.

While a lot of the key reasoning makes sense and wide receiver is certainly one of the bigger needs for the organization, just how important is adding a tall receiver?

Ideally, it would be nice if the offense had someone who's at least 6-feet tall.

John Brown and Cole Beasley were everything Buffalo hoped for and then some in their debut seasons with the Bills in 2019. But the fact of the matter is both are among the smaller receivers with Brown at 5-foot-10 and Beasley at 5-foot-8.

The Wild Card matchup with the Houston Texans, perhaps, was proof Allen needs a tall wide receiver. When plays were extended and someone needed to make a play in tight coverage, Allen consistently would target 6-foot-2 wide receiver Duke Williams.

The result was a mixed bag, but many took that example as evidence this hole to fill could be the most crucial in the 2020 offseason.

It certainly would make the offense more dynamic if the front office brought in one of the many available options for this niche role. It could be a veteran like A.J. Green or Alshon Jeffery. Perhaps a draft selection such as Clemson wide receiver Tee Higgins or Texas wide receiver Collin Johnson.

But the fact of the matter is for Allen and this offense to take the next step, they need a complete, top receiver that can do it all.

Should that include making tough grabs? Absolutely. That doesn't mean, however, that the player added has to be 6-foot-6.

Some of the best receivers at going up and plucking the ball out of the air aren't towers. DeAndre Hopkins is only 6-foot-1. Odell Beckham Jr. is just 5-foot-11.

The Bills need weapons like that, who could become elite at the catch point, with route running, speed, run after the catch ability, a complete repertoire.

So in the NFL Draft, if it were to comes down to two prospects that are very close on the draft board, height shouldn't always be the main factor that determines the decision.

If the belief is TCU wide receiver Jalen Reagor has more tools than Tee Higgins, but Higgins is a few inches taller? That shouldn't be the reason they go with Higgins.

Just look at the teams playing in Super Bowl LIV as an example.

When looking at the San Francisco 49ers, they too have built their passing game around fast receivers that can create separation in different ways. Emmanuel Sanders is just 5-foot-11, while Deebo Samuel is 6-foot-0.

This is where the NFL is going.

The Carolina Panthers are a great example of this. After trying to surround Cam Newton with twin towers in Kelvin Benjamin and Devin Funchess, they didn't see the success come as a result and rebuilt the receiving core around D.J. Moore and Curtis Samuel.

This isn't to say having a tall wide receiver wouldn't help Allen, but it isn't the only way this offense can get to a higher level.

Allen improving his decision making and down-field accuracy will help. As could a second-year leap from tight end Dawson Knox.

The 49ers and Chiefs have two of the best tight ends in football. That certainly provides both teams the type of plays being discussed here.

If a wide receiver they want happens to have that size? Great.

However, the focus should be about finding a WR1 for this offense. Not trying to force this role into the plan.