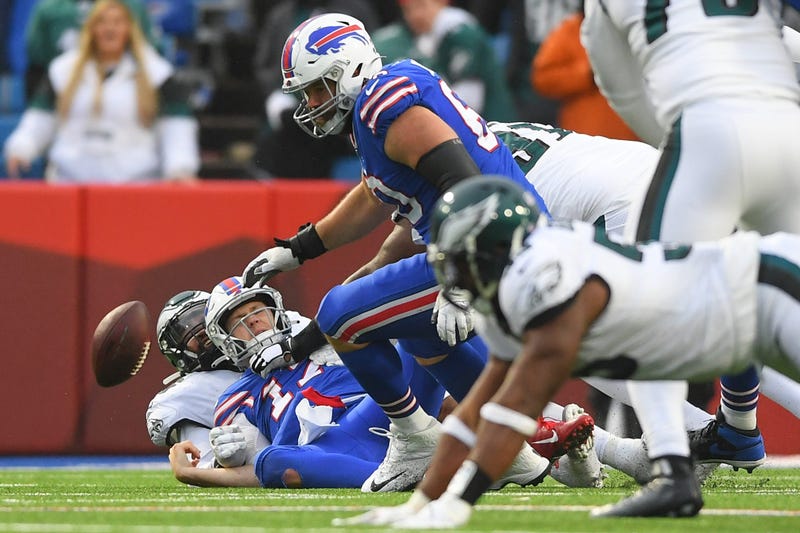 It was an ugly, dreary day at New Era Field on Sunday as the Buffalo Bills dropped their second game of the 2019 season in the rain and wind to the Philadelphia Eagles.

The Bills seemed to be in pretty good control of things with the football late in the second quarter at the two-minute warning. That changed on a dime when quarterback Josh Allen coughed up the football on a third down designed run to give the ball back to the Eagles at the Buffalo 25-yard line.

The Eagles immediately went on to turn that mistake into points to re-take the lead, 11-7 just before halftime. Philadelphia then got a 65-yard touchdown run from rookie running back Miles Sanders on the second play of their opening drive in the third quarter, and the Eagles then went on to pound the ball down Buffalo's throat on the ground en route to a 31-13 win.

Despite the loss, the Bills are 5-2 in the standings and still in a great position in AFC playoff picture.

This week, the Bills will close out their three-game homestand in Orchard Park with a visit from the Washington Redskins, who have already had an event-filled season through eight games.

The Redskins have started the season 1-7 in the NFC East, with their only win coming against a winless Miami Dolphins squad nearly three weeks ago. The team fired its head coach Jay Gruden after an 0-5 start to the season, and may now have to turn to rookie quarterback Dwayne Haskins this week as starting quarterback Case Keenum is in the league's concussion protocol.

However, the Redskins are coming into this game with a little bit of extended rest time after a 19-9 loss to the Minnesota Vikings this past week on Thursday Night Football at U.S. Bank Stadium in Minneapolis.

Howard Simon was battered last week after the Bills escaped with a nail-biting win over the Dolphins after the bye week. He went from 13-3 before the Dolphins game to 11-5 after a 31-21 win over Miami in Orchard Park. However, this week's edition of "Howard Picks the Bills" saw another change in picks as Howard dropped the Bills to 10-6.

Follow along on Twitter for the latest picks from Howard by using the hashtag #HowardPicksTheBills. You can also track all of Howard's picks throughout the season with Brayton Wilson's picks tracker on Twitter: @BJWilsonWGR.

You can listen to the entire segment below: