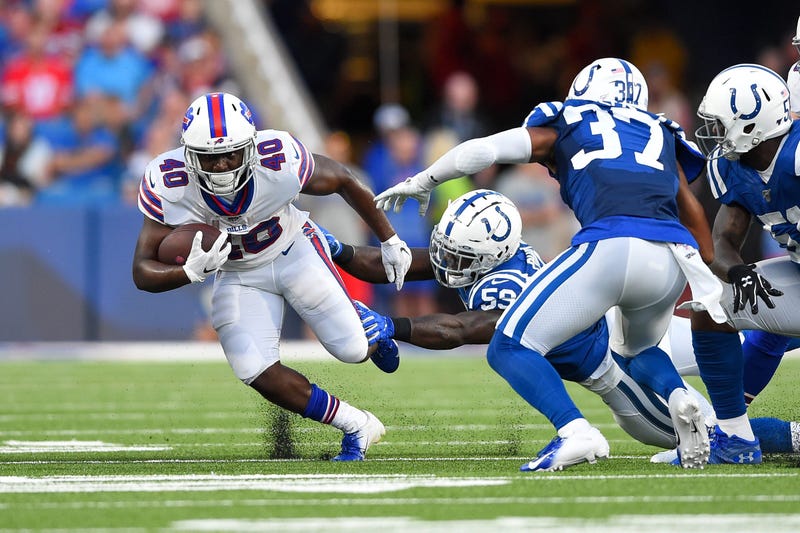 It took less than 24 hours for former Buffalo Bills running back LeSean McCoy to find a new home.

The Kansas City Chiefs swooped in on Saturday to sign McCoy to a one-year contract worth $4 million, and is reunited with his former head coach with the Philadelphia Eagles, Andy Reid.

The Bills moved on from the veteran running back after four seasons in Buffalo as they look to the future with rookie Devin Singletary.

With both McCoy and Singletary finding themselves in very similar situations, dealing with a crowded backfield, who will end up with the better fantasy season in 2019?

Fans took to Twitter to give their two-cents in Sunday's late night discussion.

Is there still belief in Shady?:

The results of the poll through the night have Singletary in the lead at 60%.

40% of Bills fans still believe McCoy will be a better option as part of the high-powered Chiefs offense, despite a 2018 season that included multiple career-lows.

Lolz to anyone who doesn't say Shady. As much as I didn't like the guy, you put a HOF running back on the KC offense and you think a 3rd round RB will beat him out in yards? Please.

Plus he gets Andy Reid as his HC, a quarterback that much further along, other weapons which will help open things up, and do you really think Damien Williams really is a #1 rb?

McCoy by far in that offense. But Singletary has more upside, you’ll kill yourself comparing the two. Keep singletary on a pitch count and put him in good situations. I’ll take a year of growing pains and learning from Gore over 1 more year of Shady being the 31 year old bell cow

Could Singletary become the next standout rookie running back to win fantasy owners a championship? It certainly has happened in recent years with the likes of David Johnson, Alvin Kamara, and Saquon Barkley providing big rookie seasons.

A significant factor for many in choosing Singletary was the presence of Damien Williams and Darwin Thompson eating into McCoy's work with the Chiefs.

Singletary.. I think he'll lead our backfield in touches & I'm not even sure if Lesean will start there.. or be the change of pace/receiving back? Idk. My assumption.

Will McCoy even be a starter in Kansas

At least a few admitted to being bias when choosing Singletary.

What do you expect us to be, honest?

Singletary showed a lot of promise in the preseason. For keeper leagues, he is the correct choice long-term. If only one could help get a team to a fantasy championship in 2019? McCoy is the pick.

Yes, his 2018 season was extremely inefficient. However, he is only one season removed from nearly topping 1,600 yards from scrimmage in 2017.

McCoy is on the slope down in his career, but the tank isn't empty just yet. In, perhaps, the league's top offense and being back with Reid, he is both the right player to own between him and Singletary, and the top Chiefs running back to own.