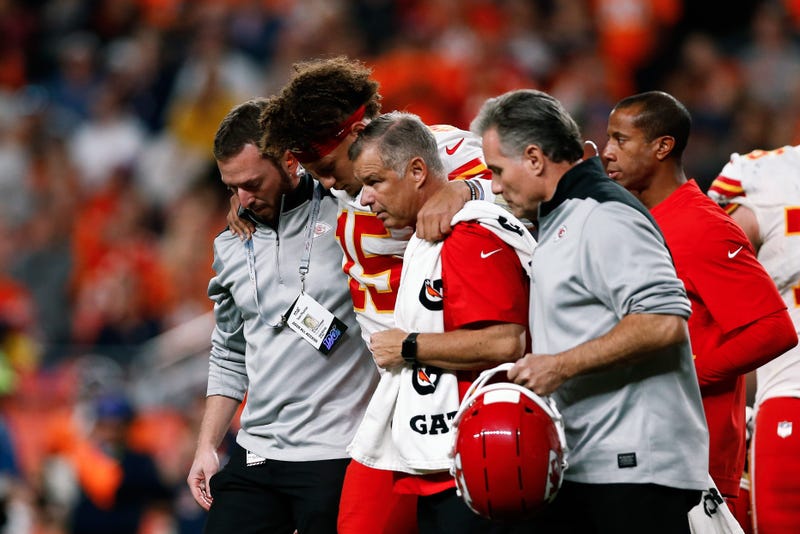 The severity of an injury to Kansas City Chiefs quarterback Patrick Mahomes suffered Thursday night in Denver could change the landscape of the entire NFL this season .

It could also make the Buffalo Bills change their approach to a race for the playoffs within the AFC.

Mahomes headed into an AFC West matchup with the Denver Broncos dealing with a banged up ankle that was injured two weeks prior against the Indianapolis Colts. The Chiefs had dropped two straight games, and it clearly was limiting the league's most valuable player in 2018.

After running up the middle of the trenches on a quarterback draw, Mahomes appeared to suffer an even more serious injury to his knee.

Here's the moment that shocked #ChiefsKingdom after Patrick Mahomes was injured and had to leave the field during Thursday night's game against the Broncos. pic.twitter.com/6GeKgf69MJ

Trainers attended to Mahomes on the field, having to pop his knee cap back in place while the cart came out.

Although the third-year quarterback walked to the locker room on his own power, his status for the remainder of the season is up in the air.

Chiefs will be awaiting MRI results on Patrick Mahomes’ right knee Friday, but one league source said that “if there’s no damage, the best case would be around three weeks.” But that’s best case. Worst is downright dreary for the Chiefs, their fans and the league as a whole.

Some medical experts, including Dr. Mark Adickes of ESPN, believe there is a scenario where the injury is a season-ender.

Patrick Mahomes with patella (knee cap) dislocation. Can be treated without surgery and brace. Could miss just a few weeks. Could also have season ending surgery. MRI will determine which course.

While nobody wants to see the league's most exciting player go down, this could open a window of opportunity for the Bills.

With one of the easiest remaining schedules in the NFL and an injury rattled AFC, Buffalo was already expected to be a heavy favorite for the playoffs.

What happens after that, however, didn't have the same high expectations. That could change if the Chiefs are without Mahomes.

Outside of the New England Patriots, what team is clearly superior to the Bills? Who is seen as a clear-cut favorite to represent the conference in the Super Bowl?

This injury could give Buffalo a chance to actually make some noise in January.

Does it change the approach to the October 29th trade deadline by the front office? Is Bills general manager Brandon Beane more inclined to be aggressive and target veterans to help start a deep run? Even if it takes valuable draft capital?

This is a question the organization, media, and fans alike could all be asking in just a few days.