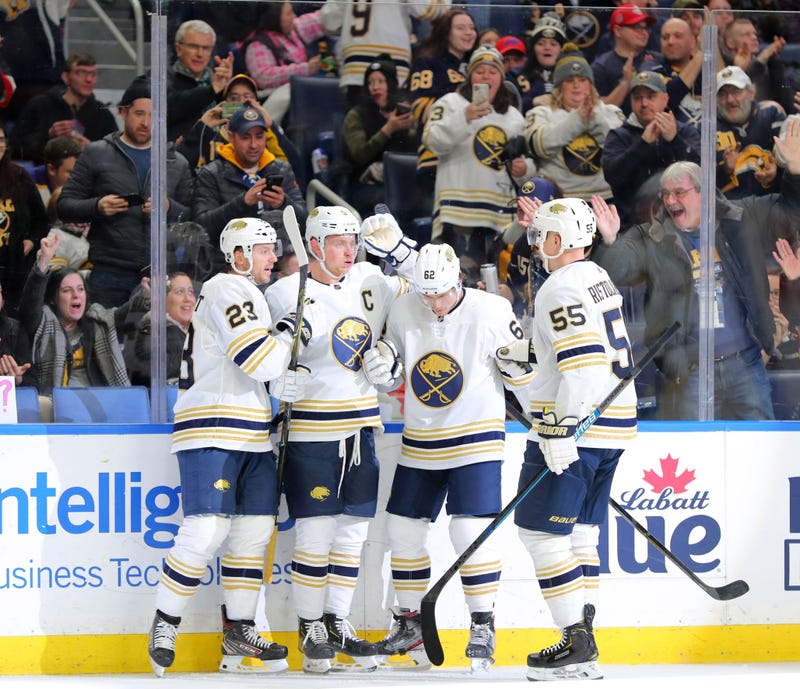 The Buffalo Sabres, once again, spotted their opponent a lead thanks to a slow start, but for the second straight game, Buffalo came out victorious. This time with a 4-3 overtime win over the Columbus Blue Jackets on Thursday night at KeyBank Center.

The line of Jimmy Vesey-Evan Rodrigues-Jeff Skinner was very active in the opening 20 minutes. The line created several quality scoring chances on their first couple shifts of the game. However, it did not result in a goal. The Blue Jackets finished the period with a 10-8 shots on goal advantage.

A defensive breakdown by the blue and gold with less than a minute to go in period resulted in a Nathan Gerbe goal to give Columbus a 1-0 lead. Carter Hutton was out of position as both the defenseman in front of him might have gotten crossed up in the process.

The Blue Jackets probably had the better overall chances in the opening frame. A couple of different times it looked like they were on the verge of scoring, only for the shot to go wide of an open net or the puck be cleared to the corner.

It was pretty much a ho-hum game for the blue and gold until the final two minutes of the second period. Columbus seemed content with a two-goal lead, and the Sabres were not pressing the issue. Their first five shots of the period were not anything particularly memorable.

Boone Jenner helped extend the Blue Jackets' lead to 2-0 just about a minute-and-a-half into the second period when he was able to tip a Zach Werenski point shot and redirect it into the goal. The visitors controlled the play for much of the period again and dictated the pace.

That all changed when Jack Eichel used the space that was being given to him to wire a wrist shot into the top corner of the net against Matiss Kivlenieks and make the score 2-1 in favor of the visitors. Sam Reinhart and Rasmus Ristolainen were credited with the assists on the captain's 32nd goal of the season.

Buffalo came out with a strong push to start the third period and they were rewarded with the first power play of the game. Nick Foligno was called for tripping, and the Sabres capitalized when Victor Olofsson buried a one-timer from Eichel near the right wing faceoff dot to tie the game at 2-2. The rookie forward had been out since Jan. 2 with a lower-body injury, but fit right back in on the top line and power play unit.

Soon after, Jake McCabe took matters into his own hands when Eric Robinson clipped Hutton in his crease. The Sabres alternate captain wasted no time going after Robinson and was given the extra two-minute minor for high sticking. However, the team was able to kill off the two minutes without any issue and without giving Columbus any real scoring chances.

It looked like Buffalo would secure the two points in regulation when Evan Rodrigues buried his fifth goal of the season with less than five minutes to go in regulation to give the home team a 3-2 lead. But once the Blue Jackets pulled Kivlenieks, they hemmed the Sabres in their own zone and would not be denied. Eichel failed to wrap up Markus Nutivaara in front, who tied the game at 3-3 with a little more than one minute to go in regulation.

Once again in the overtime session, the Sabres controlled the 3-on-3 play against Columbus. Eichel double-shifted during the overtime and helped create the game-winning goal by Olofsson. The two teams combined for five shots on goal in the extra session, with end-to-end action keeping fans on the edge of their seats. Olofsson capped his first game back in the lineup with his 18th goal of the season, and has now helped the blue and gold put together a little run over the last 10 days after a slow start to the homestand out of the bye week.