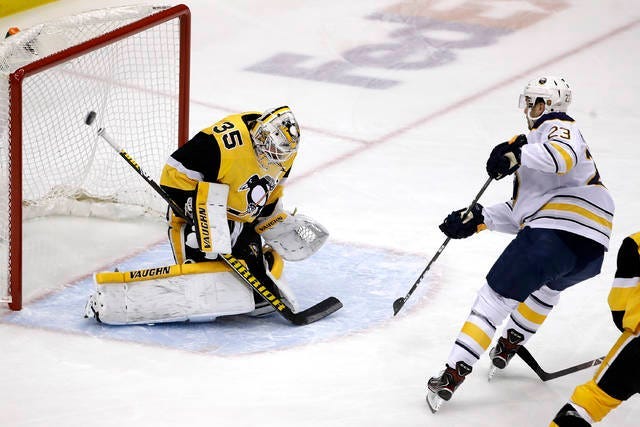 Saturday's 5-2 win by the Buffalo Sabres over the Pittsburgh Penguins at PPG Paints Arena was a total team effort. The home team had their moments, but Buffalo controlled the play for longer stretches and did not wilt when the Penguins tried to push the team around.

Ralph Krueger decided to start the energy line for the blue and gold and it paid off seconds into the contest. Zemgus Girgensons was left all alone in front of the net and he cashed in his 11th goal of the season on a one-timer from Kyle Okposo. The pass came from below to goal line and stunned Tristan Jarry on the first shot of the game.

Pittsburgh tried to press the play immediately after the goal, but the blue and gold played solid defensively in front of Carter Hutton to allow the lead to double later in the frame. Sam Reinhart created a turnover on a pass by a Penguins defender. The winger broke in on goal and from in tight scored his 22nd goal of the year.

Buffalo went to the power play with a 2-0 lead, similar to their situation in Ottawa on Tuesday. It was that power play, and a subsequent shorthanded goal allowed that gave the Senators life. There was no such opportunity for the Penguins on Saturday. Jack Eichel buried a shot from the left wing faceoff dot past Jarry to balloon the lead to 3-0. Reinhart collected his second point of the game with an assist on the power play tally, along with Rasmus Ristolainen.

Pittsburgh’s lone power play of the opening period came after Colin Miller stood up for Marcus Johansson. Patric Hornqvist delivered a big hit on Johansson, making contact with the head of the Buffalo forward. Miller did not waste any time going back at Hornqvist and was assessed a roughing minor. However, Buffalo killed off the penalty thanks, in part, to some good work in net by Hutton. He stopped Sidney Crosby on a shot in-tight.

Buffalo’s second power play chance of the game did not have the same results as the first. It felt like the team never really get setup in the offensive end. Pittsburgh had a chance or two shorthanded where Hutton had to make a save. That seemed to give the home team extra life, which they used to their advantage moments later.

Evgeni Malkin danced into the offensive zone and around the Buffalo defense to score his 19th goal of the season and cut the Sabres lead to 3-1 halfway through the middle frame. It was the first goal for the Penguins in nearly six periods.

Jeff Skinner has been the most talked about Sabres player recently, and more specifically what the reason for his scoreless drought is. The forward had a quality chance late in the second period, but could not beat Jarry with a wrist shot. Skinner had time and space, trying to go five-hole on the Penguins netminder. It would have been nice for the Sabres if he was able to find a way to pick a corner and make it 4-1, instead of staying a 3-1 game.

The Sabres had the better of the play to start all three periods in this game. Sheary and Jimmy Vesey nearly combined to extend Buffalo’s lead back to three goals on their first shift of the frame. Jarry had to come up with a save on Vesey right at the top of the blue paint.

Skinner’s goalless drought finally came to an end with a re-direction on a pass by Johansson to the slot. The entire Sabres bench was smiling as Skinner skated by on his 12th marker of the year.