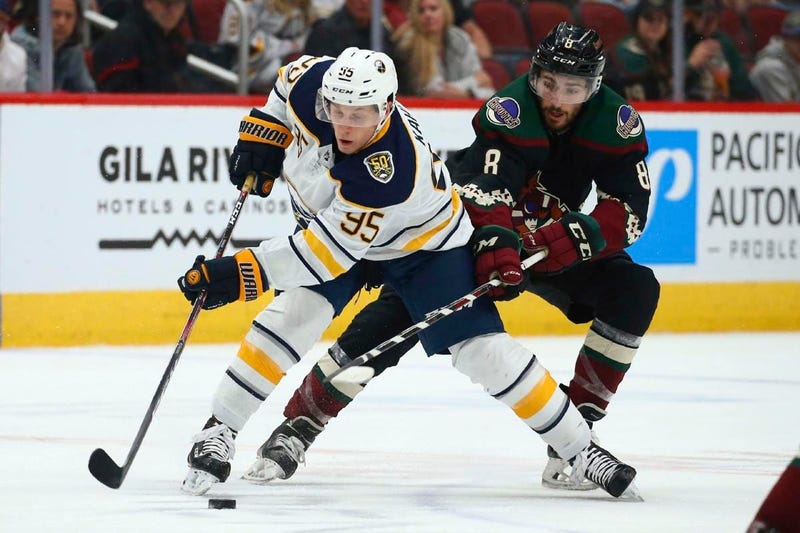 The Buffalo Sabres have had chances in each of their first three games on the road trip, but once again on Saturday night at Gila River Arena, the team had a lapse defensively that resulted in a 5-2 loss to the Arizona Coyotes.

The Sabres, once again, had a strong start, taking the play to Arizona over the first half of the opening period. Buffalo also kept the Coyotes without a shot on goal for more than five minutes into the game. Even after Rasmus Dahlin was called for high sticking, the new look penalty kill did not allow any quality scoring chances against. They were able to keep the puck to the outside, and thanks to a Zemgus Girgensons blocked shot in the slot, even had a chance at the other end.

A pair of goals just 44 seconds apart minutes after the penalty kill allowed the Sabres to enjoy a 2-0 advantage through a period. First, Dominik Kahun created a turnover in the offensive zone, pushing the puck from the corner to the front of the net where Marcus Johansson was able to wait out Antti Raanta for his eighth goal of the season and a 1-0 Buffalo lead.

Less than a minute later, Wayne Simmonds made his presence known by creating a turnover near center ice. He took a shot from the slot, and it hit the stick of Jeff Skinner and went in. The re-direction by Skinner gave him goals in back-to-back games and 14 overall on the season. Shots on goal were 9-8 in favor of the blue and gold, but they had the better of the chances in the frame.

The middle period was a polar opposite for Buffalo. The Coyotes scored two of their three goals in the period less than a minute apart. A defensive breakdown in front of the net allowed Jordan Oesterle to glide down and slam home a pass from Clayton Keller, making it 2-1 Sabres just over two minutes into the period.

Phil Kessel capitalized on a second chance opportunity 53 seconds later to tie the game at 2-2 in the middle stanza. The forward’s 14th goal of the season was assisted by Alex Goligoski and Oesterle. Keller recorded an unassisted goal just about five minutes later to give Arizona their first lead of the night, 3-2. It was a very difficult period for Buffalo defensively and it cost them the lead.

The Coyotes played a very strong defensive game in the third period, and while Buffalo was able to record seven shots on goal, Arizona was never in much danger. Keller’s second goal of the game came with six minutes to go and sealed the blue and gold’s fate. Oliver Ekman-Larsson chipped in an empty net goal with 20 seconds to go in regulation just for good measure.

It did not look like the Sabres lacked effort in the final period, but the fact that is was the third game in four days against three of the contending teams in the Western Conference caught up to the team. Victor Olofsson’s injury in the first period forced increased ice time for players like Skinner and Simmonds as head coach Ralph Krueger tried different combinations with Jack Eichel and Sam Reinhart.

At this time of year, most players are battling some type of injury, but it is evident that Eichel is trying to fight through what is more than just bumps and bruises. He has taken faceoffs in the last two games, but he continues to labor as he tries to lead the team by example. He was despondent in the locker room during the postgame, one of a handful of players that were still in their equipment even after a significant cool down period.