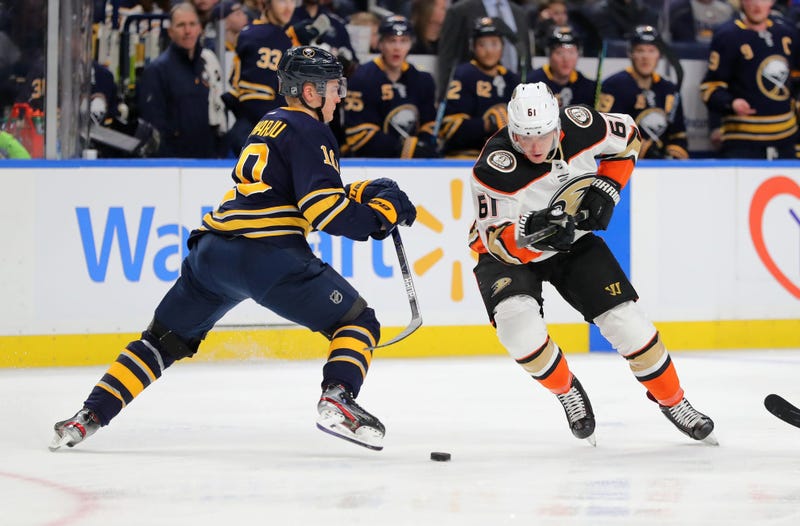 The Buffalo Sabres dug themselves too deep of a hole early in their 3-2 loss to the Anaheim Ducks on Sunday evening at KeyBank Center.

Buffalo surrendered the first three goals of the game before finding their legs. The Ducks came out right from the start and put the blue and gold on their heels, and Jonas Johansson had a tough time getting settled in. Jakob Silfverberg opened the scoring less than seven minutes into the game by beating Johansson with a wrist shot. It looked like as soon as he saw Johansson sliding over to the other side of his crease, the Ducks forward kept the shot close to the near post.

The Ducks' next two, and last, goals of the night came less than two minutes apart. Ryan Getzlaf was able to slide into the slot and slam a one-timer into the net. Then Nick Ritchie kept the puck along the ice and stunned Buffalo to extend the lead to 3-0 over the home team.

Johansson settled in after stopping Troy Terry on a penalty shot, but thought he could have been better right off the opening faceoff. The goalie added that the stop was, “ for sure a little bounce back, so that felt nice, but I gotta get better at starts. I felt like I let the team down a little at the start, so I gotta step up there and be better to help the team collect points here.” He finished the night with 25 saves on 28 total Anaheim shots on goal.

Head coach Ralph Kruger thought the whole team needed to be better right from the start, saying that Anaheim, “took advantage of every opportunity and we weren’t creating anything offensively either until about probably at least eight, nine minutes... There was some energy on the bench and [Johansson] really played strong all the rest of the way, so what a recovery from a difficult start where we were all part of it.” Once again, the Sabres' best period was probably the third, but this time they could not get the game-tying goal and salvage a point.

Johan Larsson got the home team on the scoreboard after creating a turnover in the neutral zone to cut the deficit to 3-1. Buffalo’s passing seemed to be much more on point as the game went on, and in the second period it was the other lines besides the Jimmy Vesey-Jack Eichel-Sam Reinhart pairing that helped get the team back into the game.

Rasmus Dahlin scored on the power play in the middle stanza after letting go of a shot from the blue line that went through traffic. The defenseman had a blunt assessment of his team’s performance, saying that “we started playing with the puck. Everyone wanted it, everyone wanted to create, everyone wanted to be involved. After those three goals, we totally tried, [but] it’s not what we want.” Buffalo outshot Anaheim 15-5 in the final period.

Ex-Sabres goalie Ryan Miller picked up the win for the Ducks. He had to make some difficult saves as the game went on, but was buoyed by Anaheim’s early lead. Miller finished the night with 31 saves on 33 shots to beat his former team.

The homestand continues for Buffalo on Tuesday when they welcome the Detroit Red Wings back to town for a 7 p.m. faceoff. It is the second game of a four-game homestand, and will also be the sixth home game out of the last seven games for the blue and gold.