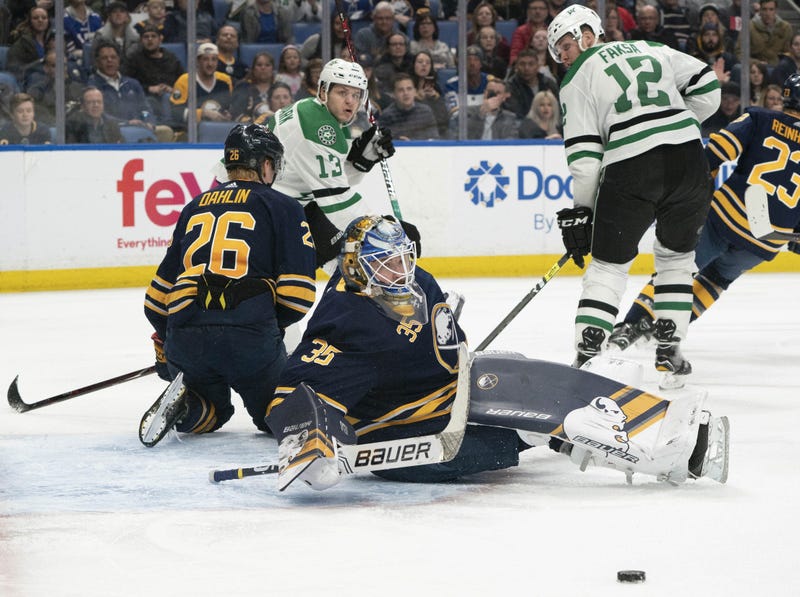 On his first shift, the puck came to him on the left wing wall. He didn’t look like he was going to get there, but he did and not only got the puck out, but got it off the boards to a breaking Rasmus Dahlin.

Nylander had a couple of offensive chances in the second period. Early in the period, he directed a shot from the slot that Ben Bishop got his pad on. Bishop is 6’ 7", so it’s not hard for him to get his pad on a shot.

He had another play where he didn’t get the puck out, but instead of settling for the turnover, he stayed with it and got the puck back and out.

I liked his tenacity behind the net not once, but twice. On the first one, he stole the puck and got in front, but was in too close on Bishop. On the second, he got in on the forecheck on won a few battles to get the puck back to the right point.

In the third period, Nylander was switched to Vladimir Sobotka’s line with Jason Pominville on the right wing. The Stars really put the clamps on the protect a two-goal lead and a post by Jeff Skinner on the power play and a clean shot from the slot by Casey Mittelstadt was all the Sabres could muster.

Nylander played 13:16, which was more than Pominville, Johan Larsson and Scott Wilson. Nylander was only able to get one shot on Ben Bishop, who picked up his third straight shutout. Bishop’s shutout string reached 204:20, while the Sabres have not scored since the third period in Chicago, which has their shutout streak at 137:40.

Nylander said on the post-game show that he got more comfortable as the game went on. He admitted he was in too close on his open chance in front.