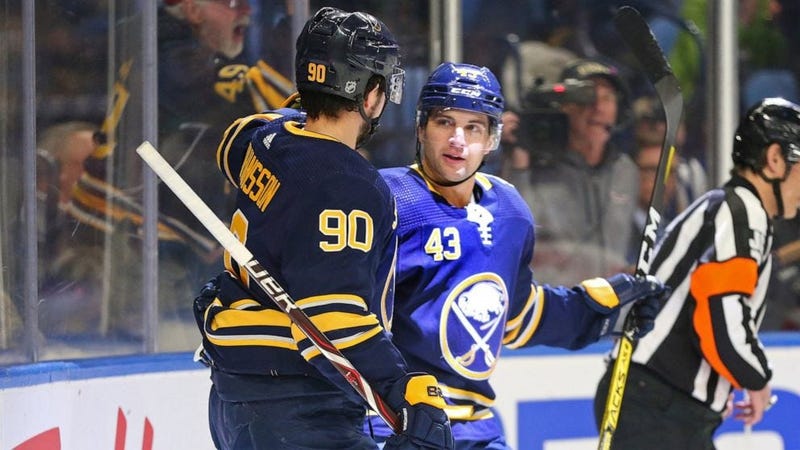 A slow start to each of the first two periods did not hamper the Buffalo Sabres' efforts in their 3-2 win over the Detroit Red Wings on Tuesday night at KeyBank Center.

Sam Reinhart’s goal less than a minute into the third period helped the blue and gold take the final meeting of the year between the two teams.

The Red Wings struck first, stunning the blue and gold less than a minute into the game to take a 1-0 lead. Darren Helm was able to find a loose puck after Carter Hutton could not find the puck, and it ended up in the net quickly.

However, I liked the immediate response from the Sabres. Marcus Johansson helped put a spark into the team by feeding the puck into the slot where Conor Sheary was able to snap a quick shot past Jonathan Bernier, tying the game at 1-1. The veterans stepped up in a big way, and it led to a strong surge by Buffalo.

At one point, the Sabres outshot Detroit 9-1 for an overall 9-4 shot advantage in the opening period. Johansson was a key contributor not only to the goal, but also on a power play chance that did not result in a goal but was not short on chances. Five of the team’s nine shots on goal came thanks to the man advantage. They had good puck movement and did not stand still.

Johansson told me during the first intermission that the team needed to focus on having a better start to the middle frame. However, once again, it was the visitors that controlled the play. Helm, once again, scored after Anthony Mantha won a race to a loose puck in the corner and eventually went to the front of the net. Hutton did not have much of a chance with the man all alone at the top of the crease making it 2-1 in favor of Detroit.

But the alternate captain would lead by example once again with his seventh goal of the season more than halfway through the second. Johansson picked the top corner of the net to beat Bernier and tie the game at 2-2.

The third period was the Sabres' turn to get the jump and go-ahead goal. Jack Eichel was able to kick a bouncing puck into the pads of Bernier, and Reinhart followed up to push the puck over the goal line. It was such an important goal for Buffalo, not only because it made the score 3-2 in their favor, but also because it was the first quick start that they had in the game.

Hutton made some big saves for the blue and gold when he needed to. The first goal of the game was partly on him, but when the Red Wings brought the pressure in the middle stanza and third, he was up to the task. Overall, Hutton made 27 saves in the victory. He especially had to be strong partway through the final 20 minutes while the team had to kill off a Rasmus Ristolainen minor penalty without surrendering the game-tying goal.

The Sabres have two more games on the current four-game homestand, continuing with the Columbus Blue Jackets on Thursday night at 7 p.m. Pregame coverage on the flagship home of the Sabres Radio Network – WGR Sports Radio 550, starts at 6 p.m. with Mike Schopp and the Bulldog.