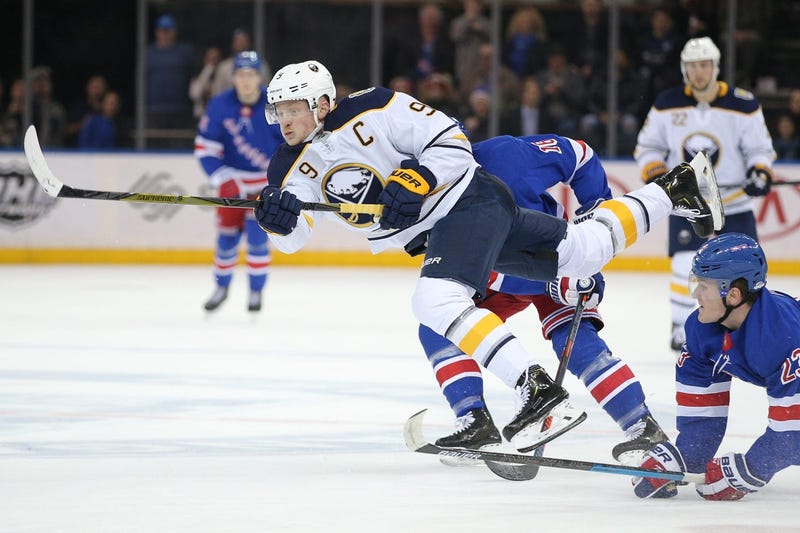 The Buffalo Sabres played their best game of the week on the back-end of two games in as many nights to defeat the New York Rangers, 3-2 at Madison Square Garden.

Once again, the start of the game and the first 10 minutes of game action was working in the Sabres' favor. I have thought that Buffalo has been the better team in the majority of their games out of the bye week. They may not have gotten results from it, but they were taking the play to the opposition.

The Sabres were able to capitalize off of a nifty pass by Colin Miller to Zemgus Girgensons in the offensive zone to take the lead in the first period. Girgensons walked in on Rangers goalie Alexandar Georgiev and deked him out of the net to put the blue and gold up 1-0. It was the forward's 10th goal of the season, and it gave Miller points in back-to-back games.

The pace to the opening 20 minutes was frenetic and up-and-down, just as we like to see the game be played.

The Blueshirts had their opportunities. Artemi Panarin was noticeable in the offensive zone and it is no surprise that he was probably the home team’s best player in the first. The shots on goal finished up 6-6, and neither team had a power play chance in the first stanza.

Carter Hutton had to make a few big saves early in the second period to keep Buffalo in front by a goal. Mike Zibanejad nearly tied the game with a shot using Jake McCabe as a screen in front of Hutton, but he was able to square up to the chance.

The first power play of the night went to the Sabres thanks to a Panarin holding minor. Buffalo had two high quality scoring chances. The first was a tape-to-tape pass from Jack Eichel to Sam Reinhart, who just could not get it past the pad of Georgiev. Brandon Montour pinched down by the goal line and nearly cashed in a rebound chance, but Rangers defenseman Jacob Trouba got a piece of the puck to knock it out of play and keep it 1-0 Buffalo.

Just a couple minutes later the blue and gold’s lead doubled to 2-0 thanks to good work in transition and then finish by the Eichel-Reinhart-Jimmy Vesey line. The play started in the Sabres end with Vesey moving the puck up to the captain, who found Reinhart on the move. He pulled Georgiev to the near post and kept the puck on the back hand to roof a shot to the far corner.

In the third period, the passing was, once again, pinpoint as Eichel found Vesey with a stretch pass into the offensive zone, allowing the forward to score on his former team and make it 3-0 Buffalo. It would be such an important goal as the Blueshirts would make one last push to try and collect a point.

The Rangers used their up-tempo offense and a power play to make it a one-goal game within the final three minutes or regulation. The Sabres' lead was trimmed to 3-1 when Mika Zibanejad recorded his 22nd goal of the season, just two nights after he helped his team defeat the Toronto Maple Leafs. Chris Kreider’s 20th goal of the season with 1:38 to go in regulation cut the lead to 3-2 in favor of the blue and gold, and they would hold on for the win.

Overall, it was a good effort for the Sabres to allow them to pick up three out of a possible four points in two days. It is not the full four points they were looking for, but an effort they can build off of against the Anaheim Ducks on Sunday afternoon.

The two teams will drop the puck just after 3 p.m. on the flagship home of the Buffalo Sabres – WGR Sports Radio 550.

news
Oreo builds asteroid-proof bunker filled with cookies and milk
music
Lady Gaga rolls up in a Tesla to drop off her absentee ballot in style
music
This Whitney Houston classic is the latest to hit 1 billion views on YouTube
news
WHO: 'Economic recovery' is impossible if people continue living 'the way they did' pre-pandemic
music
Ally Brooke on her new book and the parts of Fifth Harmony that made her 'uncomfortable'
music
RADIO.COM's Friday Night Takeover with Jon Pardi