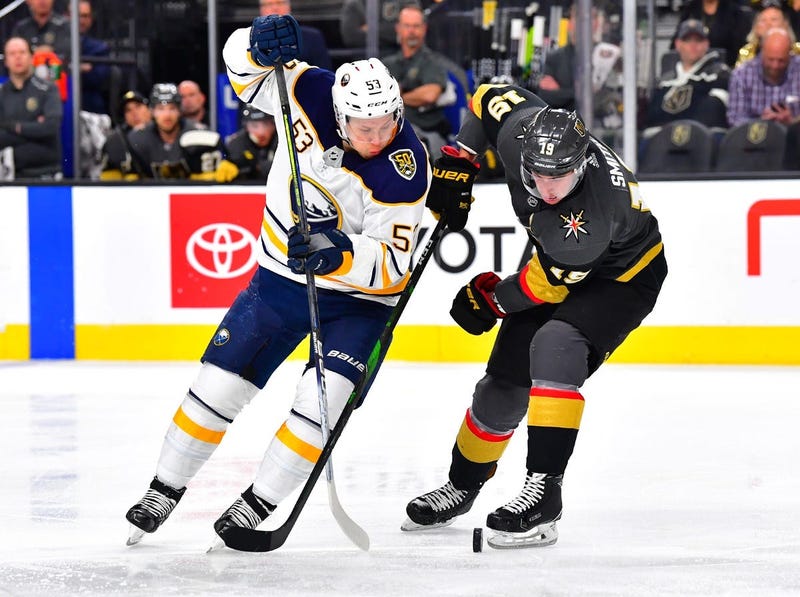 The Buffalo Sabres, once again, put forth a strong effort, matching the effort of their opponent, but it resulted in a 4-2 loss to the Vegas Golden Knights on Friday night at T-Mobile Arena.

The blue and gold, once again, started out quickly, and this time it was the newest Sabres forward who was able to give the team a 1-0 lead. Dominik Kahun surprised Robin Lehner and the Golden Knights with a shot into the top corner of the net that capped off a strong offensive shift for the team. Jimmy Vesey created an offensive zone turnover, fed the puck to Marcus Johansson who used a nifty backhand pass to setup Kahun in the slot.

Buffalo finished the first 20 minutes with nine shots on goal, but was outshot 11-9 by the home team. Vegas capitalized on a Johansson turnover in the neutral zone to tie the score at 1-1. Nicolas Roy was able to get to the front of the net, thanks to a line change by Buffalo, and beat Carter Hutton who sprawled out to try and make a save.

Jeff Skinner continues to create quality scoring chances, but just could not finish them off. In the opening period, the forward tried to sneak a wraparound chance in on Lehner, but the netminder was able to get to the goal post to keep the shot out. He also had a similar chance in the middle frame with the same result.

Vegas’ offense had its moments and hemmed the Sabres in their own end for several moments at times. Hutton made a few quality saves, and plays by Rasmus Ristolainen and the rest of the Sabres helped keep the game tied.

Jonathan Marchessault was whistled for the first penalty of the game when he got locked up with Vesey just outside of the Sabres zone. The Golden Knights forward was not happy with the penalty call, but it was a good one. The Sabres had one or two good scoring chances, but a strong penalty kill by the home team did not allow for any good, sustained zone time by the blue and gold.

Buffalo’s best chance of the period came after the power play ended when Kyle Okposo received a backhand pass by Brandon Montour right at the top of the goal crease. Lehner had to stack his pads to keep the puck from crossing the goal line. Later in the frame, Okposo was open in the slot, but hit shot went over the net. The Sabres and Vegas each recorded six shots in goal in the middle period.

Once again it was a blown defensive assignment by Buffalo that results in a Golden Knights goal. This time it is William Karlsson that is able to skate into the slot with no attention paid to him. Max Pacioretty flipped the puck from the corner and Karlsson scored his 14th goal of the season to give Vegas a 2-1 lead over the Sabres.

Another 2:19 later and the lead ballooned to 3-1 in favor of Vegas thanks to Reilly Smith’s 26th goal of the year. Smith would add his 27th goal of the year with less than two minutes remaining in regulation to make it 4-1 thanks to the empty net tally.

Skinner was finally rewarded for his efforts in the game. It is with little consolation that he recorded his 13th goal of the season with under 20 seconds to go in the game.

I thought the Sabres fought hard, especially as the third period went on, but it was too little too late after the defensive lapse that allowed the home team to roll to their eighth straight win of the season. Buffalo outshot the Golden Knights 19-11 in the final period, and overall 34-28 in the game.